When I was a little girl, my family used to go visit my father’s Uncle Aaron one day a year.  He owned the general store in Penn’s Neck, New Jersey, and I had the best time there.  He told us kids to just go around the store, and take whatever we wanted!!!  How magical was that?! 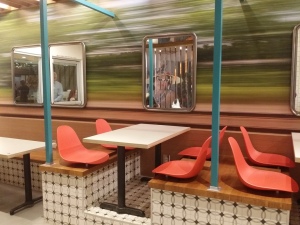 One of the three different kinds of seating. Tables and the patio are the other two. Photo by Alice Farinas.

Well, that’s what the opening night party at Spireworks, Westwood Village’s newest eatery, was like.

I’ll do a full review of it some other time, but for now, I can tell you about the party, which was really fun and well-done.  We guests ordered like regular customers, and sat where we wanted.  And we could take home whatever we wanted, as well. First of all, the personnel was all upbeat and happy to be of service.  Though the concept is the basic order-at-the-counter, it is a little more complicated than that, so it took some getting used to.  But we had pleasant manager, Deborah, to guide us along the way. 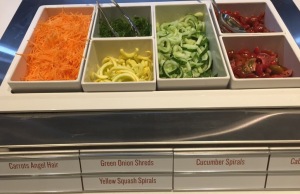 Some of the interesting fixings. Photo by Karen Salkin, as is the big one of the staff, at the top of the page.

For some reason, the owners, Jeff and Bob, made the menu about travel, so, the suggested sandwiches, rice bowls, and salads are referred to as “destinations.”  You can either choose one right off the menu, or create you own, which is what I suggest.  And they’re all one price.  After you choose your base, you then go along the line and tell each worker which items you want in it.  And that’s it!

There are also some sides to choose among, (the flavorful potatoes are the bomb!,) and my favorite items—tiny two-bite dessert cakes.  The chocolate ganache one is heavenly! 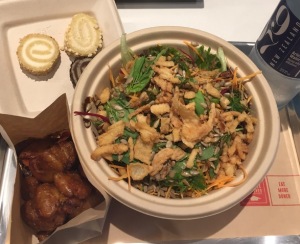 My plate of the chicken bowl, with a slde of the delish potatoes, and a few tiny desserts at the top. Photo by Karen Salkin.

And I’m happy to report that the rest of the food we tried is also delicious!

Between Alice, a couple of other people I knew there, and taking a sandwich home to Mr. X, (which the staff encouraged me to do,) we were all very happy.

There are booths and tables, a patio, interesting sodas and hot drinks, lids to make the various containers to-go ones—they thought of everything. Well, except for milk (for the desserts!)  But don’t worry—I set them straight, so hopefully, milk will be a reality there soon. 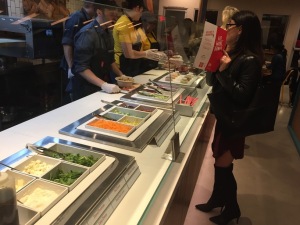 A customer on the line, trying to decide what to order. Photo by Karen Salkin.

On top of all that, we each received a gift bag on our way out, the contents of which Mr. X said to me were “like they went into your room and saw everything you like!” He is so right about that! I drooled when I saw a tiny box of colored pencils, even though I was wondering what they were for. But then I gasped when I noticed the adult coloring book! (I actually detest that denotation; to me, coloring books are coloring books. But I do have to admit that this one would be a tad hard for kids. And maybe for me, too!)

So, the Spireworks opening night ended the way it began—with tons of fun. I can’t wait to return!