I think you all know by now that Mr. X doesn’t like going out to eat. (Great spouse for a restaurant critic, eh?) But one place he doesn’t make a fuss about coming to is the 800 Degrees in Westwood. 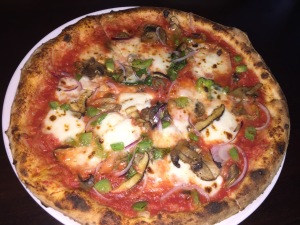 The pizza I “designed.” Photo by Karen Salkin, as is the big one at the top of the page.

I had thought that was the only location of the specialty pizza eatery, until the other night. The branch in Hollywood threw one of the most generous media parties that I’ve ever been to! Boy, did they do it up right. And I’m happy to report that the food was delicious, both the regular dishes and the new one we were there to celebrate.

Because it was a party, Mr. X sat it out, but my pals Flo and Joyce were happy to accompany me. And we were all thrilled with the entire event. 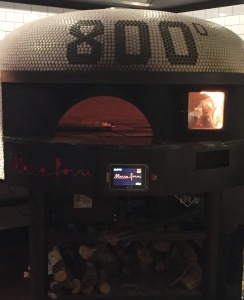 The purpose of the fete was to introduce a new menu item, along with the restaurant’s new look. But I had never been there before, so I don’t know the difference in the latter category. It all looked fine to me. We did note that they have a good patio, though, but I have no idea if that’s new or not. Flo can’t wait to go back and sit out there.

So, all we cared about that night was the food. And, trust me—it was plentiful! And all really delectable.

Several smaller items, like individual meatballs, were passed all night by their more-than-amiable staff. I’m serious about that—there was not a crabapple in the bunch! They all seemed happy to serve, which made the whole experience that much more pleasurable.

Some of the many topping choices. Photo by Karen Salkin.

All the guests were also encouraged to go up to the pizza line, and order whatever our hearts desired. In case you’re not familiar with the concept of 800 Degrees, you choose a base pizza and then your own toppings. Flo told me that she “loved the huge variety of choices,” and she was especially a fan of “that you can pick your own base first.” But if you’re too lazy to decide on your own, they have several Specialty Pies to choose from. (I love when a pizzeria calls them “pies.” It’s so Brooklyn! Like I am.)

The menu also features salads and appetizers. We tried only two of them, and all three of us loved the kale and quinoa salad, which Joyce said “is an appealing combo.” It also contains avocado and tomatoes, the addition of which Flo said “added welcome color and flavor.” And they both enjoyed the creamy tahini dressing which we all felt was, according to Flo, “unusual for a quinoa salad.” 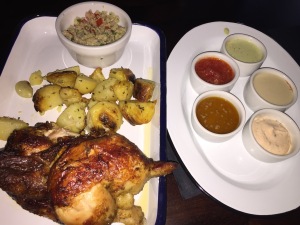 But the star of the evening was the new rotisserie chicken. Each table at the soirée received a half chicken platter to share. It was tasty and moist, and fell right off the bone! And, as Flo pointed-out, was very hot on arrival, which we all appreciated. They brought us a side dish of several sauces, which apparently go with the chicken, but no one there seemed to know what was in them, (they mostly had exotic monikers,) so we passed on them. But we didn’t need them anyway, especially with a side of chunky potatoes which Flo said were “perfectly-cooked.” I love potatoes like that!!!

And also we got a sneak peek at–or rather, taste of–the roast pork sandwich that will go onto the menu in the near future. It can’t be soon enough for me because it was my favorite dish of the night. The caramelized onions on it put admiration over the top. 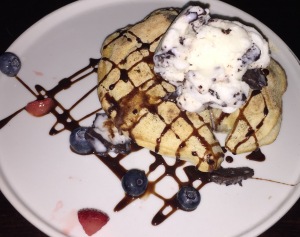 The only item none of us cared much for is the chopped salad. It wasn’t bad; just kind-of bitter, a flavor quality of which none of us is a fan. But everything else was quite the success.

They have only three desserts there, one of which is simply gelato. So we tried the pretty Nutella calzone, which was fun. But to make it worth the calories, it needs soooo much more Nutella in the middle! But Flo told me, “The gelato on top was luscious.” 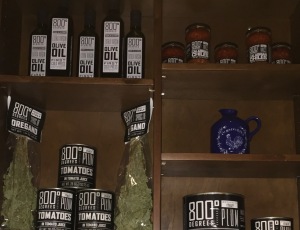 Some of the fun items from the goodie bag, minus the pitcher, of course. Photo by Karen Salkin.

We were already leaving with big smiles on our faces, but they got even wider when we received incredible goodie bags on our way out! They contained several high-quality non-perishable food items, (I was thrilled to finally have a good olive oil!,) along with a gift card, which will come in handy since 800 Degrees is already in my regular rotation of places to grab a quick, delicious, and healthful bite! I’ll just have a hard decision between the pizza, salad, and now the chicken. That’s a good conundrum to have.