Trending
You are at:Home»DINING»DINING/PARTY: HATCH YAKATORI + BAR MEDIA PARTÉ
By Karen Salkin on May 22, 2019 · DINING, PARTIES

When I was leaving the recent foodie event, Masters of Taste, I noticed some very attractive chicken tidbits from Hatch, an eatery whose booth I had missed on the way in. I was stuffed to the gills at that point, but that food was calling my name.  And it was delicious! 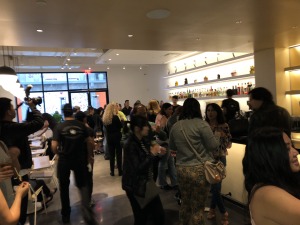 So when I received an invitation to their private media party this week, I was dressed and ready to go a few days early! I grabbed my New Best Friend, Marc, and off we went.

I have to admit—I’m far from a Japanese food expert.  All I know is that none of the fare that night was sushi; I believe it’s labelled yakatori.  (What gave me that clue, you may ask? It’s right in the restaurant’s title!  Duh.) No matter the designation, the bites were all creative, with a Japanese bent. (If ever I do a full review of Hatch, I’ll get to the bottom of it for you.)

It was all passed in small batches by some of the most pleasant servers I’ve ever encountered. They didn’t try to be our friends—they just wanted to accommodate us. That’s the biggest bonus in any restaurant, especially at a party! 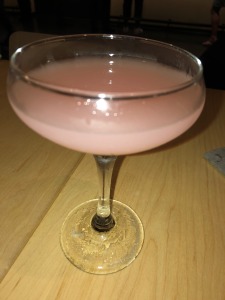 Hatch is in a very hip and interesting area of downtown, in an open-air mall called The Bloc. It’s a not-big space on the bottom level, with indoor-outdoor seating. A bar is the first thing you see when you enter from the patio. That area was hopping all night, with Japanese cocktails, including a pink one with lychee nut juice. (But it was in desperate need of an actual lychee nut garnish. So by the time you have one, they may be doing that because of this nudge. You’re welcome.)

Marc is my best foodie these days, and he tried absolutely everything, while I stuck to chicken and potatoes. And the tidbit with my favorite moniker, Mushroom Party, which was three different varieties of fungi on a skewer. 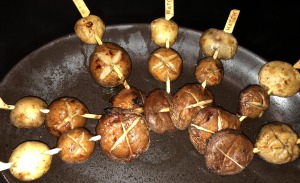 The fete featured nine passed treats, and one special Wagyu Beef bite that you needed a ticket for. (Neither one of us eat that, so I can’t give you an opinion on it. But others seemed happy with it. And just having to go up to the cooking area to order it added a little something special to the festivities. Everyone kept asking each other if they had gotten theirs yet. It was a great mingling point!) 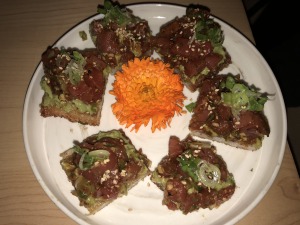 I made a meal of just three of the appetizing morsels—Black Karaage Chicken, which is a bite of chicken with something black and crunchy on the outside, (which Marc thinks was seaweed,); Pee Wee Potato Stick, which is adorable tiny tasty potatoes on a skewer; and the aforementioned Mushroom Party Stick.

Marc went to town on five of them. His fave was the Hamachi, which he told me he loved; followed by the chicken Thigh and Green Onion Stick; Avo Tuna Toast, which he liked, especially because it came on a crispy rice cake; and the really spicy Pork Belly Stick.  Of interest is that he is far from a lover of tofu, but he said the Agedashi Tofu was very good, again because it was very crispy. (We’re obviously both fans of the crisp!) 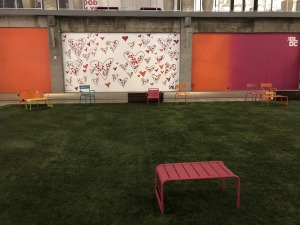 More good news is that, altho there was no dessert at this soirée, (which I cannot end a meal without,) since Hatch is in a mall, Marc and I went right over to the little yogurt shop across the way, and finished our evening with a sweet treat. We sat in front of Hatch in a colorful artificially-turfed area, and enjoyed it, while watching the partiers continue the reveling inside.  It was fun knowing that we had just been two of them ourselves!