Long a fan of the twenty-two year-old Café 50’s in West L.A., (which has been in existence longer than several of my friends!,) I was excited when Craig Martin, the founder, told me last January that he would be opening another one on Vermont this summer, with his business partner Peter Kuyanov. So it turned-out to be this Fall, but it’s finally here. Yay! There should be one on every corner, if you ask me. 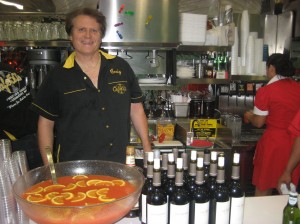 And not just because Craig loves the Olympics as much as I do, (though he puts his money where his mouth is and actually goes around the world to attend them, whereas I stay home and watch every single second of television coverage,) but because of the fun fifties food.

I could drink one of their shakes every day. I promise that my posse and I will go back there soon for a real review, but now I must tell you about their uber-generous opening night party. 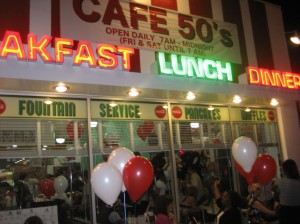 I’ve rarely seen a food event that was this benevolent, but that’s the kind-of guy that Craig is. The VIP party began at 7PM, and within minutes, the food was streaming out of the kitchen and the booze was flowing. [Note: I doubt that most of the guests deserved such sumptuous fare, but oh well to that. I hope that at least some of them are Los Feliz denizens who will make Café 50’s their new go-to eatery. I know that I would, if I lived closer.]

The service was non-stop and very pleasant. The cutely attired servers worked their butts off. No gym visits necessary for them this week! And always with a smile, to boot. 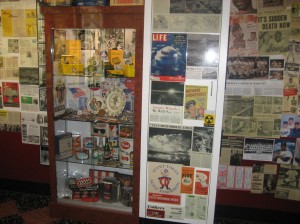 But I’m getting ahead of myself. First, let’s discuss the ambience. I don’t know where these guys find these things, but the walls and display cases were full of gorgeous new old (I know that’s an oxymoron, but I mean it) movie posters, magazine ads, and gossip pages. Each one is fascinating. And to see them all brand-spanking new was so fun. I could have spent hours just reading them. (I love nostalgia.) 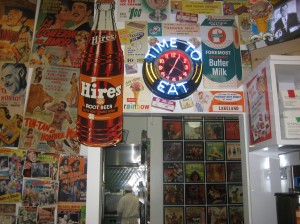 There were also the requisite individual jukeboxes, which I was dying to use, but they had party music going all night, although I wish it had been hits from the namesake era instead. And most importantly, the female restroom was immaculate and sparkling. I hope it stays that way.

We early crowd members could sit anywhere we liked, (booths, counter, back semi-private room, outside,) and of course I chose the most happening area, a booth near the beverages and the servers exiting the kitchen. Many revelers were just as happy standing and mingling. 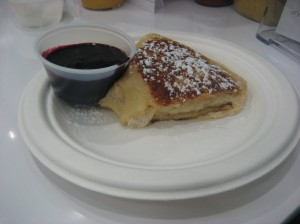 The blintze with blueberry sauce. I ate all of the other food items so fast that I forgot to photograph them!

This is just some of the food they served constantly all night: three kinds of burgers, two kinds of fries, the most non-greasy onion rings ever (which put the dreadful swimming-in-oil Umami Burger ones to shame,) chicken fried steak and mashed potatoes with gravy (that was, shockingly, my favorite item!,) the mac and cheese wedges that were the hit of my birthday party last January, turkey pastrami sandwiches, (which I inhaled,) tuna melts, waffles (which I was, sadly, too full to try,) and my guest’s favorite, the famous cinnamon-infused blintzes with blueberry sauce. Oh, did I forget to mention deluxe shakes in many flavors, beginning with Peanut Butter Cup, then moving on to Elvis and Hawaiian Tropic? I told you that I’d be there every day if it was closer! I’d never have to have the same thing in a whole month!

On top of it all, there was a strolling magician, Nathan Gibson, entertaining the huge crowd. His tricks were so wonderful that I even stopped eating for a few moments! That’s a magic feat unto itself!

And, as we left the soiree, we were each handed a hefty gift certificate to use on a subsequent visit, which, in my case, will be soon.

So, to sum it all up, I want to congratulate Craig and Peter on yet another Café 50’s to share with the world, and look forward to doing a full review in the near future. Until then, I’ll plan on just what to try next time, though with all that variety, it will be difficult. And that choice is the only thing not easy about a trip to this wonderful café!

[Note: I have to get this one grammar note off my chest, though. It has always driven me crazy that they write “50’s” erroneously, with an apostrophe before the “s.” Many others make that same common mistake. (At least their website address has to have it right, because URLs don’t accept punctuation.) The rule is that apostrophes indicate possession, except in the case of contractions and the word “its,” but let’s stick to one lesson at a time. In this case, it indicates that there should be something after the word that belongs to “Café 50,” not that the café is all about the era called the 50s. I guess that since it is their title, they can write it any way they like. But you know that I’m always out to make the world more literate, so I had to point that out. I’m sure that no one cares about it except moi, but since I didn’t want to change their logo for this column, which made me look erroneous as well, I had to explain myself.]