Trending
You are at:Home»DINING»DINING/NEW YORK: THE THREE HENS
By Karen Salkin on April 19, 2012 · DINING, NEW YORK

Every time I’m in New York, which is at least three times a year, I learn something new. This time, I went to a nice, casual, neighborhood eatery in an area that’s new-ish to me, Kips Bay, which is known mainly for their many Indian restaurants. So, The Three Hens, an American cuisine half-yearling, is most likely a welcome addition to that neck of the woods, although the owner and executive chef, Shiva Natarajan, is Indian himself. 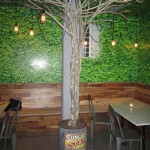 The fun interior. All photos by Karen Salkin.

It’s not a big room, but, on a spring or summer day, with the picture windows open onto the street, it has that real New York feel, which I love.

Since we showed-up shortly before closing, we were helped along by Patty, the manager, with whom I share a few acquaintances, so I can’t tell you how the service was because we didn’t work with any servers. But Patty was interesting, so it worked-out.

As you know, I usually review with three other associates, but, as we were coming from a business event, and weren’t sure what time we’d arrive for dinner, there were just two of us, so we don’t have many dishes to tell you about. I was stuffed after the first appetizer!!! 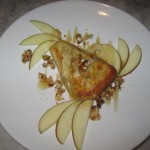 And appetizers is just about all we were able to eat with just two of us. But some of them were winners, especially the special one that night, baked brie with Fuji apples. It was fun and delicious. 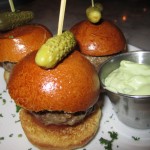 My stomach could have just ended there, but we had to plug on, so I’d have more to tell you about. (Also, because I try to sample one item from each category when I happen upon a place that’s new to me.) The appetizers were filling and we shared some more. The sliders were too pink for my well-done taste, but Lauren really enjoyed the wasabi-spiked aioli that came on them. (We did it on the side, just in case.) 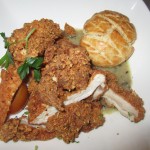 My two favorite items were the mac and cheese that had a crispy top, and the fried chicken, that had a cute, surprising presentation. Rather than big, full-sized sections of the bird, it was cut-up strips in a bowl, alongside a buttermilk biscuit and atop sausage gravy. (So, not for vegetarians!) 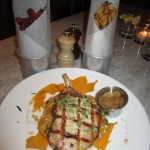 The only entree we tried was the pork loin chop with spicy applesauce. Lauren loved the latter and said it “added great flavor,” and “made the dish.” It came with butternut couscous, which we’re not fans of, in general, so we added french fries, which was my favorite dish of the night, and their new sweet potato fries, and were very “candy-esque.” So much so that we were glad we got them last, so no dessert was necessary!