My friends and I made a wonderful eatery discovery in the West Village recently. Seabird had been recommended to me, but since only one of our trio eats seafood, we were a tad concerned about what fare we would find there. But we needn’t have been–it’s a very easy simple menu with something for everyone. 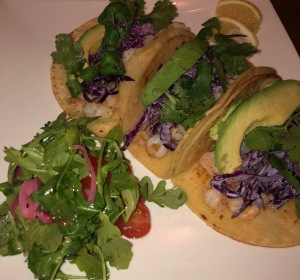 Shrimp Tacos. Photo by Karen Salkin, as is the one at the top of this page.

So let’s get right to discussing the delicious food, with the other particulars to follow.

The only appetizer we tried is the Shrimp Tacos, but let me tell you—that was just about the best thing I ate in New York in my entire two-plus weeks there! Sheila pointed-out that the shrimp themselves were so tasty because they were bigger shrimp cut into smaller pieces, as opposed to baby shrimp which don’t taste as good as big ones. And the tacos were topped with avocado slices. The dish came with a little zesty side salad on the plate, and Manny said he loved the cherry tomatoes on it.

We tried entrées in three different categories. Sheila, my biggest seafood expert, went with the Pan-Seared Scallops, the beautiful presentation of which we both appreciated. She said the scallops themselves were “large, meaty, tender, and well-seasoned.” And the dish also featured asparagus and tri-colored roasted cauliflower, with a garnish of baby spinach. 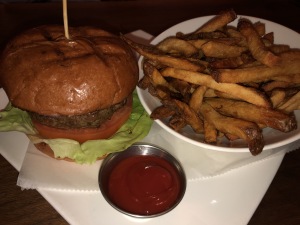 My meat eater, Manny, went with the House Burger, which is a high-quality beef blend of brisket and short rib. I took one little bite myself, and can attest to his assessment that it was “deliciously tasty.” He added that the burger itself was “plump and ample,” and we all noted how nice and tall it was, with a crisp bun. But the star of that dish is the incredible homemade french fries that accompanies the burger. All three of us went nuts over them! (Just make sure to request them a little well-done because we were falling all over each other to get the next one for ourselves.)

Since I’m really not supposed to eat meat anymore, and I don’t eat most fish, I went with the Homemade Mushroom Ricotta Ravioli that comes in a brown butter sage sauce. Not only was it yummy, but so filling that I couldn’t even eat more than one of the quintet of raviolis on the plate! (But no worries—Sheila and I went to town on the leftovers the next day.) It’s an excellent choice for your vegetarian pals who want to go out with you, but don’t eat meat or fish. 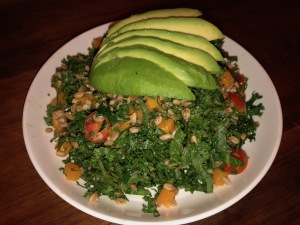 Or they could just go with one of the two salads on the menu, which we all agreed is a meal unto itself. We tried the Kale and Farro Salad, which turned-out to be Sheila’s favorite dish of the night. She said that having the kale cut so small makes it taste even better. It comes with roasted butternut squash, cherry tomatoes, and a very generous helping of avocado. Sheila said, “The sweetness of the squash contrasted with the kale beautifully.”

I was shocked to see that Manny, who didn’t even want to try even a bite of the salad to begin with, kept going back for more! He explained that he was very impressed that the dressing was so light. He said that the reason he doesn’t usually like salads in restaurants is because the dressing usually overwhelms them, which was definitely not the case at Seabird. 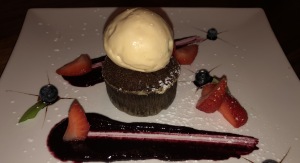 Then came my favorite part of the meal. There’s a lovely simple dessert menu with just five basic items, and we were unanimous in our desire for the Chocolate Cake. It was actually a beautiful little delicate spongy cake; I could have eaten a whole one myself because it wasn’t one of those heavy wear-you-down make-you-sick desserts. It was actually perfect. And the vanilla ice cream on top with a garnish of raspberry coulis and fresh berries was the proverbial icing on the cake.

As to the atmosphere, I loved the British feel to Seabird. It’s very cozy. The entire time we were there I was picturing a whole story of living in the neighborhood and coming out in the snow and walking around the corner to this comfy neighborhood restaurant, and sitting at the bar for a drink and oysters. (I don’t drink nor eat oysters, but I’m trying to portray the romance of the situation.) 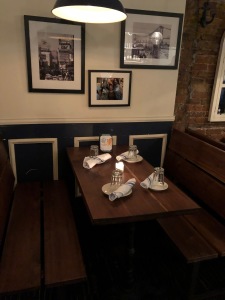 Sheila appreciated the “nice thick walnut tables” and the old sepia photos of New York on the walls. And our server, Marcela, made our time there run smoothly.

Seabird is in a very bustling area of the West Village, right on a corner, with easy public transportation to get there, and plenty of parking spaces on the street if you drive down there, as we did. And it’s right along the Halloween parade route, which is good to keep in mind for next year!

If you’re in New York and visit Seabird, make sure to ask for Elizabeth, the charming British owner. She loves to engage with her customers, which makes the experience even more special.