Reading my own dineLA promo yesterday reminded me that I’ve been somewhat shirking my restaurant critic responsibilities lately. Even when I was billed mainly as a restaurant critic on my show, Karen’s Restaurant Revue, back in the day, I really critiqued everything in life, which is how this E-zine got born. But, don’t think for a minute that I’m not still eatery-obsessed. So, I figured it’s time for another restaurant review. [Note: I’ll try to get to more of them this year. That’s a resolution.]

And, with my life in New York forever changed with the recent death of my precious mother, (which means that, in a year from now, I won’t be spending as much time in the Big Apple as I always do, and especially not in my beloved Brooklyn,) I decided the first review of 2012 should be on one in Brooklyn. On their newly-famous mini restaurant row, to be exact, which is on Cortelyou Road in Ditmas Park. I love the area, but not Purple Yam, one of it’s most famous residents. 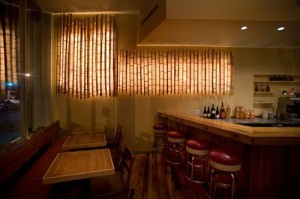 I was taking my sister out to dinner in mid-December, (will wonders never cease???,) and had wanted to try this unassuming Filipino (with other Asian influences thrown in) place for quite awhile, so I suggested it. She jumped at it, as she had already eaten there, and loved dish or two. Let’s just say it’s yet another thing she and I disagree on. At least I have two varying opinions to give you here, so that’s a bonus.

Purple Yam was just an overall weird experience, with a strange menu, to boot. It’s also deceptively expensive, and appeared kind-of dirty, with horribly uncomfortable booths. My back was killing me the whole time. The seats were like some kind of torture chamber. Very odd choice for the designer of the place to make. 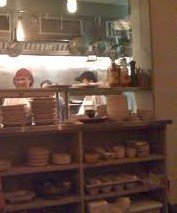 The basic view I had all evening. Delightful, eh? NOT!

And I usually love mis-matched dishes, especially at a funky afternoon tea, but here they just looked gross. I felt like they were procured at an unsanitary garage sale, and never yet washed, or something like that.

Worse than all of those to me was the service by the very odd-looking staff. They were kind-of scary, in an opium den-denizen kind-of way! And our waiter kept touching his face..and not washing his hands! I wanted to throw-up. And nearly did! And when I asked him for a second napkin, which was not an over-bearing request, by any stretch of the imagination, he handed me a paper towel!!! I told you—weirdos. (By the way, even Betty said the service was “peculiar.”)

In regards to the cuisine, we did try a lot of dishes, with my sister liking most of them, especially the sauces, which even I admit were interesting. It was all good enough, just not special to me; there was not one dish I would ever again crave, and a couple, like the pork sliders and chocolate rice dessert, I wish I could take the memory-erase pill to forget.

Speaking of the pork sliders, they were all fat!!! It’s the cheapest dish, but the meat was downright inedible. In yet another weirdness, it was just $6. and listed as an entree, when the rest of them were in the mid-teens. They must realize that they’re serving you just pork fat, so they don’t want to charge more it.

In the okay category, in my opinion, but excellent category for my sister, were these dishes: chicken adobo; watermelon, green mango & jicama salad; and deep fried spring rolls with pork, mushrooms, carrots, jicama & sweet-sour pineapple sauce. 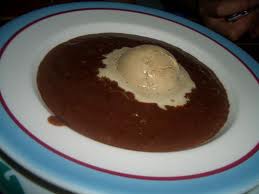 Can it get any more unappetizing than this???

She loved her dessert, which was a “young coconut” pie, (which the waiter tried to explain for quite awhile; his description was essentially akin to what students who don’t study try to have pass for knowledge during oral exams.) Mine, on the other hand, was one of the grossest desserts I’ve ever had the misfortune to see. It was described as “sweet rice in chocolate & cream,” which sounded kind-of yummy, topped with ice cream. (Since I hate coffee, the flavor it came with, I chose the questionable “young coconut,” which was the only really okay part of the meal.) It was downright disgusting! It was basically rice swimming in some thin chocolate liquid. It was something that some desperate pre-teens would come up with on a rainy week-end, and throw-out before their parents discovered it.

The one thing that bothered me more than all the other glitches, and not from a money point-of-view, but from a fairness one, was this: because of my sister’s crustacean allergy, we had to order the scallion pancake without the shrimp, which should have been a choice to begin with, with so many vegetarians dining out these days. When I very politely pointed-out to our delightful waiter, (I hope that even The Big Bang Theory‘s Sheldon can recognize my sarcasm there,) that had charged the full $12 for what was essentially a vegetarian pancake, he informed me that he couldn’t charge lass for it because they “don’t have a marking in the computer for that!” That one takes the cake! (I wish it had taken some of the other dishes with it.) Then how about comp a dessert, pal?! Especially the sickly liquid rice one, which should have been comped anyway, due it’s grossness.

I had better luck in Manhattan this time, and I plan to tell you about the positive experience later on this week. So you’ll have a little yin and yang. Maybe Purple Yam should get some, as well!