When I’m in New York, I’m even more into trying every restaurant possible than I am at home in LA. There’s just something about that city. And there are actually more eateries there that I pay return visits to, even though I want only new ones, but I crave the food, especially in Brooklyn. (Read: Nathan’s, Roll N Roaster, Brooklyn Ice Cream Factory.)

But, on my recent trip, which turned out to be the saddest one of my life, with the unexpected death of my beloved mother, there was little time for food, especially in the week and a half after her demise.

The Jewish tradition is to “sit” in the house for a period of about a week, to allow people to visit, and comfort, you. I always thought the purpose was to keep your mind occupied, because you’re hosting all these visitors, and you have to feed them, introduce them, and entertain them. At least, that’s how it had worked for my mother and me when my father died, so I never realized the concept was for the guests to be taking care of you!

In this case, I was really desperate for someone to take care of me, and let me just lie there like a blob and continue crying my guts out. But, as usual, the shiva for my mother turned out to be me taking care of everyone else, with little help from anyone else, save for Mr. X, who was more in the pain with me than even my relatives. (I’ll share some of those horror stories with you down the line, the second one of them pisses me off royally again, so stand by for your hair to curl. But at least your life will seem rosy in comparison!) 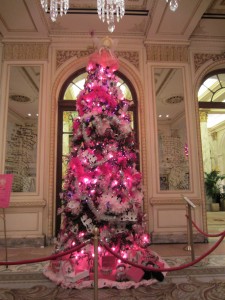 This picture doesn't really belong in this spot; I just wanted to show you guys the beautiful tree in the Plaza Hotel lobby. All photos by Karen Salkin.

Mr. X was even more wonderful than usual, doing at least three quarters of the work, (I did the other quarter, with a bit of the grunt work being done by my strong niece) while grieving himself for the woman who always referred to him as her “favorite relative.” (No worries–I don’t take it personally. I know that he was, and he was very deserving of the title.)

[Note: hang in there–the Plaza Food Hall review is on the way!]

So, after all the sadness, followed by extreme grief, accompanied by more work than two people should have to do by themselves, we were in desperate need of some sort of respite. Shiva isn’t supposed to take place on Saturday, and it was New Year’s Eve, so we assumed no one would come over anyway, so we decided to head to the big city in the afternoon. Mr. X, the krump dancer, needed to express. 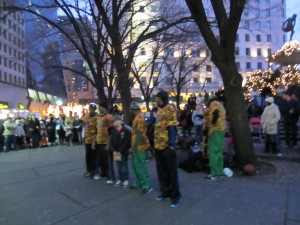 The Breeze Team, readying for their performance.

So, we went back to the scene of his New Year’s Day 2011 triumph, the plaza across from the Plaza Hotel. The crew he danced with that day, The Breeze Team, were there again, and there were happy greetings all around. They included him in their awesome set, (made even more awesome by the presence of Oldz Kool, his krump moniker,) and we felt a bit like our former selves again. Happy New Year to us! 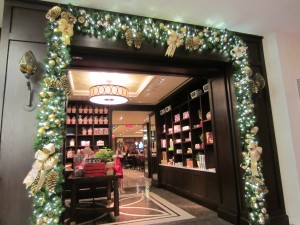 One of the gift areas.

After all this excitement, I needed a rest room, and chose the venerable Plaza Hotel itself for the honors. Even though we’ve stayed there over the years, Mr. X thought that we shouldn’t just go in to use the facilities, though the whole world does. We wound-up downstairs, in front of their relatively new eatery, the Plaza Food Hall, which is nothing like the food court at malls, so don’t confuse them.

I put my name in with the hostess, just to be able to use the facilities, (my rule, not theirs,) but when I came out, with my name about to be called, we decided to stay and eat. It was still early on New Year’s Eve, but, with nothing to celebrate, and being miserable, drained, and exhausted, we figured why not at least have an interesting repast to end the year that we were happy to see come to an end?

Having eaten at the little bit similar eatery Eataly this past summer, I was pleasantly surprised by the Plaza Food Hall. It was not obnoxious at all, as Eataly is, and the food was actually quite delicious, as Eataly’s isn’t. So, let’s forget the comparisons and take this one on it’s own merits. 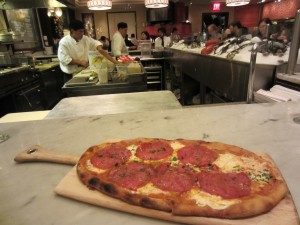 The Bronx Bomber pizza on the counter at one of the work stations.

There are many different areas to eat in, I believe all at high tops. Some are at just high tables, but we sat at a counter around an actual food station where they were preparing food, although not ours. It’s kind-of cool to have a constant visual, so you don’t have think of anything else, if you don’t want to, which is exactly what we needed. (We also really needed some new food; everyone who was kind and generous enough to send food platters to our house there sent the same one from the same deli! Though we totally appreciated it, enough corned beef and pastrami already!)

This wasn’t like sitting at a counter at a diner or coffee shop; the waiter comes up behind your stool to take your order, which is actually a little strange. But Evan was really cool and helpful.

We were obviously still too depressed to eat a lot, but we loved the few things we tried. Mr. X was most impressed with his Coke! I mean it! It came on a plate; one full glass of Coke with another one of ice, and was accompanied by a little spoon with which to scoop your preferred amount of ice. It really was the perfect soda presentation. 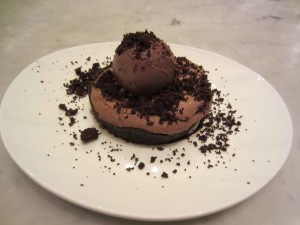 We shared a Bronx Bomber flatbread pizza, which has roasted tomato sauce, caramelized onion, mozzarella, and pepperoni, and was just what the doctor ordered. We had a lot of snacks planned for watching the ball drop on TV later, so we just moved on to a dessert.

We shared the Mississippi Mud Pie, which is a round chocolate thing with chocolate crumbs and chocolate ice cream. (Or gelato—I just can’t remember it all right now.) It was very rich and enough for two people who were too depressed to eat for the past week. 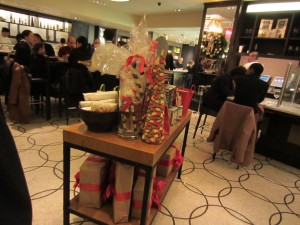 One of the several middle-of-the-room gift stations.

So, the food was excellent, the service nice and understanding, there’s always something to look at in that place, and best of all, what gave a place my top stamp of approval when I was reviewing restaurants on my show, (which was a hot picture of me in a tuxedo,) they have tons of gifts!!! Mr. X always wants to waste spend money on me, but I didn’t want anything at that point in my life. But, trust me, it was tempting.

I hope that we’ll go back there one day when we’re finally feeling better, (although I have no idea how many years from now that will be.) There’s so much more there to eat! And gifts to buy!