I’ve been restaurant-obsessed since I was a little girl. It’s one thing about me that’s never changed, (much to the chagrin of the going-out-eschewing Mr. X.)

So, as soon as I get anyplace in my travels, I check on where to eat. Even though I half live there, New York is no exception. I have almost more restaurant books and magazines there than I do in L.A!

So, when I read about the “most popular deli in New York” a couple of years back, I knew I’d have to check it out for myself. I have one fun friend there, Helen, who really knows a lot about all kinds of places and events in New York. I love an alive and aware person like that! 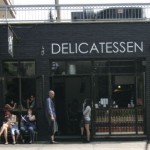 So, on a day that we were skedded for a play date, (yes, grown-ups can have those, too!,) she suggested Mile End Deli, since we had both wanted to try it. It’s a bit far away from our ‘hoods, and I really didn’t want to spare much time away from working on my Brooklyn abode, so she even offered to pick-up some sandwiches and stuff and bring it over to my house.

Someone had erroneously described it to her as an “iconic deli,” but this was far from that! [Note: “iconic” means “executed according to a convention or tradition,” which this place is the opposite of. Heck, I’d barely even call it a “deli!”] Thank goodness I wound-up having to do some business in Manhattan that day, so we were able to “take” afternoon tea instead.

My friend, Manny, was helping me at the house, and since we would be passing by the Boerum Hill section of Brooklyn on the way back to the city, when he asked if I wanted to have lunch at some quick little place, I immediately came up with Mile End; he’s a deli lover, and I just desire to try every eatery known to man! Especially nowadays in Brooklyn, with my three-months-a-year time there coming to an end.

After trying to park in that weird neighborhood for about a half hour, (I think I remember there being no left turns, or something like that,) and walking a few very long blocks, we finally arrived! And we were famished, (and fermisht, which fellow deli-goers should understand,) which is usually when food tastes its best. That’s another rule that Mile End breaks because nothing about this place is fabulous in the least, especially the food! I’d like to know who these Zagats voters are because they must be subscribing to the “Vote For The Worst” mentality! This place is barely a deli, let alone the best one in the city! And anyone who truly thinks so cannot be Jewish, because if my people are experts on one thing, it’s delicatessens! [Note: here’s an example of their non-classic deli fare : “romaine & radicchio salad with green apple, pistachio, buttermilk dressing.” Messrs. Carnegie and Katz are rolling over in their graves!] 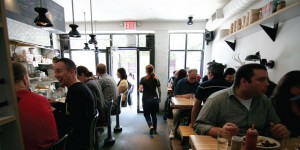 So we finally get there, and it’s minuscule! I swear, my small-ish walk-in closet is bigger! There are three picnic tables inside, (complete with the requisite hard wood, no-back benches, another reason to say, “oysh,”) so you’ll most likely be sitting right up close to a stranger. And, on this hot day, there was no air-conditioning! So, if you also have that sticky experience, you’ll most likely have to find someplace to shower after. Ugh. There are about five counter stools, as well. This is definitely not the place for claustrophobes, such as myself!

The service was okay, but nothing to write home about, either. The servers and kitchen peeps didn’t exactly look fresh, though, so that just added to the un-appetizing-ness of the place. We were actually relieved that we didn’t have time to “dine.” (But I must laud them for being really helpful on the phone, all three times that I’ve called there. That’s a major bonus.)

Granted, we tried only three menu items, but that’s actually about a quarter of their entire menu, so I think it’s a fair share to do a review of.

We asked what would be ready the fastest, since we were time-constrained. I wound-up with the weirdest reuben sandwich ever! It did have the obligatory corned beef, cheese, and Russian dressing, but there was cole slaw instead of sauerkraut, and, in place of the classic rye bread, it was on seeded pumpernickel…with raisins!!! OMG! (And not in a good way.) And it was so wet from the overuse of said dressing, that it literally crumbled in my hand and was so unattractive to consume. Don’t ever order it on a first date! (If this is where your gentleman caller chooses to take you on a first date, run from the guy! Unless you’re both faux hipsters, then attendance here is de rigueur.) The sweetness of the raisins really did not blend well with the meat.

Speaking of meat, all of it appears to be smoked! The fish, too. What’s up with that?!

Manny choked down the basic roast beef sandwich, and said it was the worst he ever had. And remember—he’s the deli lover. He said the only thing that would have made it worse is if, after the long trek back to the car, we had gotten a ticket!

We just had to order the signature side dish—poutine. These are a basic dish in Canada, and that’s where the main owner is from. It’s fries with cheese curds and gravy, which in this case is roasted chicken gravy; it got a mixed reaction from us. Having been to Canada lots of times in my life, I knew what to expect. I know that cheese curds are kind-of gross to begin with, but I figured I could move them aside. Thank goodness I asked for the fries to be well-done, or they would have been total mush under the gravy. But I liked the basic fries, and the gravy, too, and was satisfied with that dish.

Manny, however, thought it was downright disgusting. He did like the few individual fries that he was able to save from the toppings’ onslaught, but hated the rest. And since this dish is a true example of “different strokes for different folks,” I’m sure there are customers who love it. If it’s not nauseating enough for you as is, guess what you can add to it? Meat. Smoked meat, of course! But let me tell you, I could not watch anyone eat that! Triple ugh. [Note #2: I can barely watch people I know chow-down on deli food, let alone the strangers inevitably seated with you at this place!]

They also sell a cookbook that they claim “is packed with 100 Jewish comfort food recipes from our delicatessen.” Well, that’s interesting because they have only about a dozen items on their super-limited menu!!! From whence came the other eighty-eight???

I understand that there’s an almost-as-small branch (but with none of the character) in Manhattan now, so you can have have your choice of where not to go!