Trending
You are at:Home»DINING»DINING/NEW YORK: MICHAEL'S OF BROOKLYN
By Karen Salkin on April 30, 2012 · DINING, NEW YORK

Last month, in New York, after a dreadful, disappointing, painful Saturday, and an exhausting, (not in a good way,) Sunday morning, (the highlight of which was a visit from Roto Rooter,) I was expecting nothing but the same from the rest of my week-end.

But, as the saying goes, the best was saved for last that time. My great friend, Manny, (who doubles as my fabulous optometrist at Optical Options in Greenwich, Connecticut, which features the hippest in eyewear,) came to the rescue. We did some old school Brooklyn errands, and then kept chatting, although I was starving. (Listening to sewer drilling really helps work up an appetite, I guess.) So, I had to invoke Manny’s famous saying from the good old days, “A little less talking, a little more eating.”

It worked because we then embarked on my favorite activity–Quest For Food. For some reason, I suggested we take a street that I thought had some new eateries on it, but I was off by a block. I was panicking, thinking I was letting him down, so I said we could turn right on the next street. And there was Michael’s, an Italian restaurant that was a big date place when I was a teen, but none of my beaus could afford. (For some reason, I’ve always been attracted to poor boys. I don’t get it. And then they always become rich after I leave them! Hmmm.) So, we decided to try it. 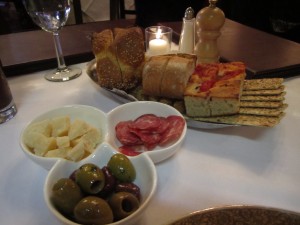 And it was wonderful! Being that it was a Sunday, it was the perfect Italian Sunday dinner time, and the place was packed. It has such a warm welcoming atmosphere. And the food was perfect.

They put a wonderful three section antipasto tray on every table; olives, (which I don’t eat,) salami, and chunks of fresh parmesan. How lovely. I didn’t even want to eat anything else!

But I went with veal marsala which was chock full of fresh mushrooms, prosciutto, and onions, and was absolutely delicious. Manny went with basic chicken parmigiana, and loved the marinara sauce. Then Enzo, our perfect waiter, told us they bottle the sauce! Lucky us! (I mean it.) 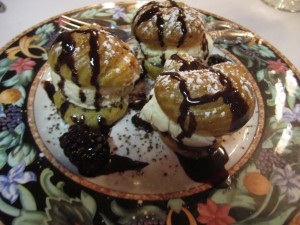 Manny had never heard of profiteroles before, (poor, sheltered lad,) but when he saw the ones I ordered for dessert, he just had to try them, which is good because it’s a generous portion. And he loved them! The best part of them, to me, is that the bottom of the pastry shell is lined with Nutella before the ice cream is spooned in, so they taste really special and different from all the other profiteroles I’ve had in my life.

At the end of this perfect meal, Enzo introduced us to Michael, who’s actually the grandson of the original owner, and is adorable. 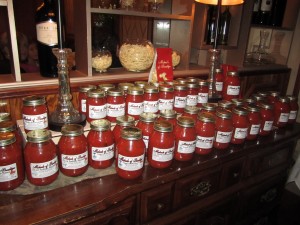 Manny and I wound-up leaving there with bottles of three different sauces and a few varieties of Michael’s homemade pasta. I cooked mine up a few days later, which a producer caught on tape in case we wind-up doing a reality show of me. Even with my lack of culinary skills, it turned out perfect. It even lured my houseguest, Sheila, who hasn’t eaten carbs all year, back into the fray!

I can’t wait to pay a return visit to the iconic Michael’s when I’m in Brooklyn again, which I still hope will be soon and often.