Trending
You are at:Home»DINING»DINING/NEW YORK: ELEVEN 14 KITCHEN AT THE JHOUSE
By Karen Salkin on December 18, 2012 · DINING, NEW YORK

ELEVEN 14 KITCHEN AT THE JHOUSE

This is interesting—I ran into a former Spago chef in…Greenwich, Connecticut!!! He’s Executive Chef François Kwaku-Dongo , and is now helming the Eleven 14 Kitchen at The JHouse Greenwich Hotel in that tony town.

I’ve loved Greenwich for many years now. My fabulous optometrist, Dr. Manny Greitzer, has a beautiful store on Greenwich Ave., my favorite area to shop and dine in; I go there just about every time I’m in New York. So, on my latest office visit, I convinced him to come to lunch with my city pal, Lauren, and me. (It took us awhile to tear ourselves away from choosing among his hip eyewear, but we made it to our reservation on-time. It was tough, though.)

Eleven 14 is basically up the block from that street, and is a perfect location for a lovely hotel. And the leaves hadn’t fallen off the trees yet, so just entering the hotel made us feel like we were in a storybook. 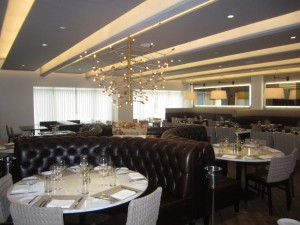 The dining room is spacious and classy, and the team of servers was always on top of things. We met Francois at the beginning of our time there because I wanted to reminisce about Los Angeles. (After all, I had been on the east coast for a whole week at that point!!!) Speaking of “coast,” Kwaku-Dongo is from Côte d’Ivoire, West Africa, and he imports chocolate from there for his desserts and attached sweets shop in the hotel. Yum!

I found his reasons for enjoying cooking on the east coast most interesting; it involves the variety of seasonal foods. I couldn’t do it justice here, so when you visit, just ask him yourself. I was listening too attently to write it all down, and it would be hard to paraphrase.

Lauren and I had a big charity dinner to attend that night, which means we didn’t try as much of the menu as we usually do, so I’m giving you our top picks, which were several. 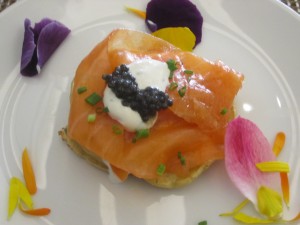 The salmon "amuse" that day.

François sent over an amuse of thinly sliced salmon on toast, topped with caviar! Manny and I don’t eat that, (except for the toast part—aren’t we cheap dates?,) much to Lauren’s delight, because she gobbled all three and said they were “superlative!” (Actually, Manny doesn’t eat much of anything nowadays, which is odd, because his motto used to be, “a little less talkin’, a little more eatin’!” So, he chimed in on just a few dishes, especially the pizza.)

I loved the fabulously fresh squash soup, made from three types of the vegetable—butternut, winter, and Japanese. [Note: squash is really a fruit, but most people think of it as a vegetable, so I decided to go with the majority on this one. But, if you’re ever on Jeopardy, I thought you should know the truth!] The soup also featured apples, walnuts, and pumpkin seed oil, which all added up to a delicious dish. [Note #2: the menu changes with the seasons, so they may not always have this particular soup, but I venture to guess that any new concoctions François comes up with will be just as good.]

Lauren and I shared the little bit different Caesar salad, and loved it. She said it was “dee-lish!” I also tried the raw tuscan kale salad (which featured walnuts, pomegranate, and goat cheese,) and was surprised that I enjoyed it so much, because kale is usually not to my liking, but it was so healthful and novel-tasting that I couldn’t help but feel good eating it. 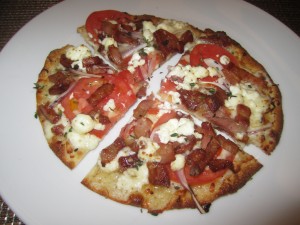 The pizzas were the heart of our lunch and they did not disappoint. Even usually food-neutral Manny loved them! He concentrated on the vegetarian Margherita, and said, “the texture was great!” He deemed the crust to be “matzoh-esque,” “loved the squirty tomatoes,” and said there was a “little spiciness to it.” Lauren and I became fans of the one with pancetta, goat cheese, and roasted red peppers. She said it was “the perfect combination of ingredients,” and loved the combo. And, the opposite of Manny’s pie, Lauren thought this one had a little sweetness to it. I forgot to find out if there were two different sauces or just two different taste-buds!

We were all stuffed by then, (and Manny had to get back to his patients,) but the main course we agreed everyone should get is the chicken milanese; we went nuts for it!!! It was served Italian-style, with arugula and roasted golden beets. They’re served on the side, but those of us in the know put them on top of the chicken and bite into each mouthful with the combination. It’s heavenly. And the beets are a nice touch of François’ that I haven’t seen elsewhere. (It’s usually tomatoes at most other eateries.)

After Manny left, Lauren and I finally got to my area of expertise—desserts!!! Apparently, that’s François’ forte, as well, because I can’t rave about them enough, especially his country’s chocolate ones! OMG! It’s a month later and I’m still craving more of them! 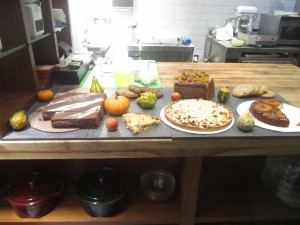 Many of the gorgeous desserts, seen through the window of the open pastry kitchen.

If you get only one dessert, make it a platter of cookies and assorted bite-sized treats. (Just order “whatever Karen Salkin had,” and they should figure it all out.) Each tidbit was better than the one before.

We also enjoyed their signature “Eleven 14,” and, of course, the “Omanhene Lava Cake,” both chocolate delights. The cheesecake was far from traditional, being more of a soft goat cheese creation, so be aware of that when you order. I enjoyed it, but don’t expect regular cheesecake, or you may be disappointed.

Since we seemed to be trying almost everything they had on the dessert menu, we just couldn’t leave-out some of their attractive sorbets and gelati, which were all wonderful. And had such beautiful presentations! We almost couldn’t bear to eat them. (But no worries—we finished them all.)

Speaking of finishing, (don’t you just love my goony segues?,) we did that to the whole JHouse experience by walking through their lounge, nightclub, and sweet shop areas, which were all just stunning. I have a feeling that Lauren and I would be regular visitors if we lived around there. And if, at lunch or dinner, you see another diner checking-out someone’s eyes during the meal, you’ll know that Dr. Greitzer is living it out for us.