Trending
You are at:Home»DINING»DINING/NEW YORK: CHINA BLUE
By Karen Salkin on May 20, 2014 · DINING, NEW YORK

After an afternoon event in Manhattan last month, three of us girls wanted to go out for a good dinner. Lauren had been to a Tribeca Film Festival fete the week before at newcomer China Blue, and highly recommended it, so that’s where we went. 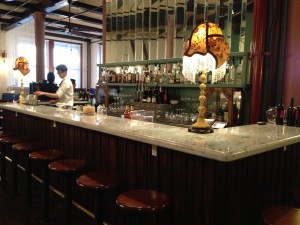 The bar, which is the centerpiece of all the dining areas. Photo by Karen Salkin.

The place couldn’t have been designed any better. It had an exotic feel, like what I would have expected to encounter in Old Shanghai. We loved the whole atmosphere; the space looked like the gorgeous opium den in Thoroughly Modern Millie, and we felt like movie stars just being surrounded by it.

I have to tell you one design note before I even get to the food and service; there’s an extra sink outside of the one-person restroom! I absolutely went wild over it. I always want to wash my hands before I eat, but I never want to tie-up the restroom if it’s the only one. This way, there’s no problem; anyone who wants to clean-up before their meal gets to do so in the easiest way possible. And it’s a classy basin, too! 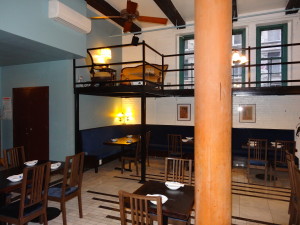 While we’re on the topic of design, the female of the married owners, Yiming, who looked absolutely fabulous herself, has redone this former Capsouto Frères space with positively beautiful and interesting appointments.  Her look is reflected in every aspect of the design.  I’d love to throw a party there!

Yiming was also helpful with the menu items; they were somewhat unfamiliar to us because it’s Shanghainese food, rather than New York’s usual Cantonese, or the specialty of my adopted home, (Los Angeles,) Szechwan.  That meant China Blue’s food was, thankfully, not too spicy for me.  (If it’s spice you’re looking for, try their other eatery, the Michelin-starred China Cafe, in midtown.)

You know that I feel that service is almost as important as the food at a restaurant, and the team here, led by Yishu, could not have been more perfect. They were very knowledgeable, especially when explaining this type of Chinese food, but didn’t try to be our best friends, which I always hate in servers. They were very professional yet friendly. The pace at which they brought out our many dishes was spot-on, as well.  And they cleared the table constantly, without us even noticing, or worse, having to ask. What a pleasure that was! 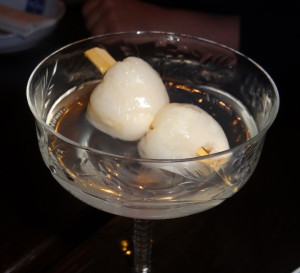 The ladies with me decided that they had to try one of the signature alcoholic beverages, and I’m still hearing about their admiration for the Lucky Lychee, which featured vodka, lychee juice, freshly-squeezed lemon juice, and vanilla bean-infused syrup. And… a lychee nut on a toothpick, the part I was jealous of! Lauren noted that it’s a “very light and refreshing drink,” that’s “not too sweet.” And Sharon is already planning her next trip back to China Blue that will begin with this cocktail! 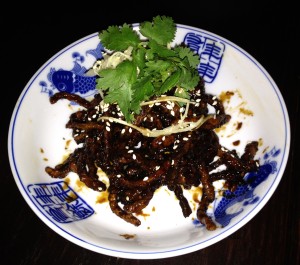 Then we finally got down to the food.  My companions insisted on trying the crispy eel to start, and they loved it.  Sharon deemed it “a foodie’s delight,” and said it was “chewy, yet crispy.”  Lauren added that the sauce was “sweet and delicious.”

They also went nuts over the Steamed Soup Buns; none of us had realized that they were so named because they actually contain soup, and when we bit into them, it squirted right out in our mouths.  Then Lauren declared, “It’s like soup!,” while Sharon said, “It’s like a soupy surprise in your mouth.”  It turned out to be Sharon’s number one dish. 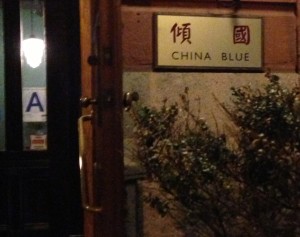 The low-key exterior, just so you’ll recognize it, should you go there. Photo by Karen Salkin.

I preferred the Pan Fried Pork Buns, which are non-soup-filled dumplings, and the basic Potstickers, which Lauren called “good, light and delicate.”

I was too full to eat much more at that point, (I’ll tell you about my fave in a second,) so I left the rest to my co-reviewers.  They continued with the “subtle,” “delicate,” “different kind of” Shanghai Wonton Soup with “thin-skinned wontons,” which they really liked. 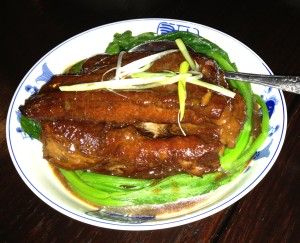 The Pork Ribs. Just look at that tender meat! Photo by Sharon Lieberman.

They moved on to the Pork Ribs, Wuxi Style, and couldn’t stop raving about it!  They were so impressed that the meat just “fell off the bone,” and agreed that the sauce was “amazing.”  It became Lauren’s favorite China Blue dish.

Sharon’s number two was the “very different” Fried Rice with Chinese Sausage, (rather than the usual fried pork pieces); how’s that for different?! She got a real kick out of this the twist on a classic. 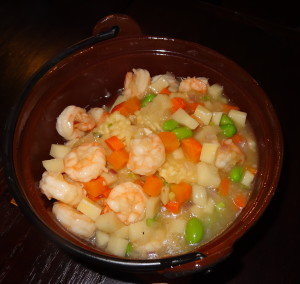 The Shrimp with Crispy Rice. Photo by Lauren Bennett.

I managed to try one last item because it looked so fascinating, and I loved it!  The Shrimp with Crispy Rice was a two-part dish; the bowl already contained two very crispy rice patties, and then Yishu poured a broth, that was filled to the brim with bite-sized shrimp and tons of vegetables, over it, thereby infusing the rice with all those tasty treats. That process was not only visually impressive, (the steam rising was fun to see,) but created really fun textures and flavors, as well.

We were way too sated to eat anything else after that meal, but I must note that they have a very interesting dessert menu, especially for a Chinese restaurant.  There are about seven or eight very creative dishes, including Rice Wine Soup with Sesame Balls and Pumpkin Donuts! What other restaurant has ever featured those?!