This is the kind-of review that makes me miss doing my show, Karen’s Restaurant Revue. It would be so much better to talk it out, rather than try to write it in a cohesive fashion. I know just where my audience would be gasping and guffawing. But I’ll give it my best shot on paper. You’ve got to read down to the end, though, because this is a juicy one. And by “juicy,” I mean one of the worst reviews I’ve ever given. My mouth waters. (But definitely not from their food.) 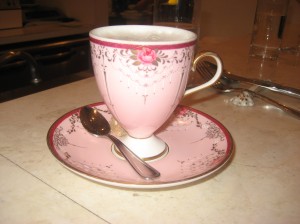 The only good thing we can say about this place is that at least the dishes are pretty!

Though I could not find the exact meaning of the root “-alicious” anywhere on-line (I research just about everything I tell you guys, to make sure I’m correct at all times,) I think that we can all agree that it’s used to connote something good. So, unless “chikalicious” means “awful, unsanitary rip-off” it’s not. Anything “licious,” that is.

I wish that I had taped what my smartest friend in the world, *Sharon, and I had to say on the ride home, because her bon mots, especially, were perfect. But we were just getting it all off our chests at the time, and I can’t remember everything we uttered in outrage against this supreme Emperor’s New Clothes of eateries. I will try my best to convey to you our creepy experience there.

For years, I had been reading about this three-course dessert bar in the East Village. I imagined a lovely afternoon tea-esque girly experience, in a tiny, but beautiful, space. What I got was far from. It all. I’ll go in a row.

For some unknown reason, they have a host for this minuscule 17-seater! (Eleven stools at the counter, six chairs at tables. I think his name was Don, and he was quite genial and the best thing about the place. (Unnecessary water-pourer, Jorge, was also lovely.) The goodness ended there.

Don suggested we sit at the counter to watch the action. There was plenty of that, but it all made our hair curl. It turns-out that the owner is a thin Japanese woman, Chika, hence the shop’s moniker. I had thought it referred to “chicks,” and was therefore fun for a girls’ afternoon out. My bad. Not only were her teeth far from lovely, which indicated to me to maybe not consume her confections on a regular basis, but her uniform was dingy and the rag she had on the waist to wipe her hands was downright repulsive. We should have left as soon as we spied it, but we’re no quitters.

The deal here is that, for $14, you get a chef-chosen “amuse,” which is a pretentious way of saying a “tidbit,” (and, for their information, the correct term is actually “amuse-bouche,” not just “amuse“) to start, then you choose a main one from a short list of desserts, then get what they’re labeling “petit fours,” yet another example of their pretentiousness because, even though the definition of a true petit four is “a small confection generally eaten at the end of a meal,” in America we generally accept it to mean little square iced cakes, which these were definitely not.

We had the misfortune of getting “served” by the most obnoxious chef ever, David, who was downright rude, bordering on abusive. The Soup Nazi has nothing on him!!! I’ve been to the soup guy’s former window, and he doled-out his orders with a twinkle in eye. David just seemed to get off on his own nastiness. (After we had choked down the crumbs that he served, the girls next to me had something else, and I asked what it was. He snidely answered that it was their signature dish. When I said I wish I had known about it, he rudely retorted, “You didn’t ask!” What an idiot–how would I know to ask?! He should have let us in on it, knowing that we were new customers. No loss, I’m sure, if the other dishes are any indication.)

Okay, so one would think that since, as David informed us, we were getting an amuse and petit fours “chosen by Chika and myself,” they’d ask us our preferences and choose accordingly. No such luck. What they “chose” for us is what the entire assemblage got! It’s what they felt like making that day. Nothing “chosen” about it, except for the fact that every chef chooses his or her menu! Morons.

But, always open to new experiences that quite often work out well, Sharon ordered a cappuccino and we settled back to, as their website states, “enjoy fabulous desserts while watching both their preparation and plating.” Trust me, I wish that we had averted our eyes. I couldn’t believe what I was seeing.

The amuse, David obnoxiously proclaimed, was “coconut ice cream on chocolate gelee.” Sounds good enough, right? It was a thimbleful of slightly chocolate-flavored gelatin with a small oval of the ice cream on top. But–this is the worst part–guess how he shaped the ice cream into an oval??? Ready?–IN HIS BARE HANDS!!! I think I’m going to throw-up writing this.

Not to reference Seinfeld again, that I’ve seen only a few times in my life, and those were in reruns, but it was exactly the episode where the chef went to the bathroom and didn’t wash his hands. Sharon and I were hitting each other under the table, but we were in such shock that neither of us had the temerity to just leave. We just swallowed it in two bites and hoped the experience would improve. And we were starving. We hadn’t eaten much beforehand because we all know how three courses of dessert will fill you up. Except in this case. 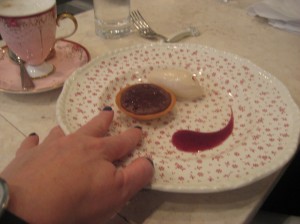 That's my petite hand in there to demonstrate just how lilliputian this fare is!

Sharon chose what was described as “Warm Chocolate Tart with Pink Peppercorn Ice Cream and Red Wine Sauce.” What she received was laughable. It was a mini-cupcake-sized shell with a dollop of basically tart chocolate pudding. A couple of inches away was another oval of ice cream, shaped again in his non-washed hands, (believe me, I watched every move they made back there,) with an isolated miniscule swirl of some red sauce. Even I, the slowest eater on earth (just ask CBS executive Paul Gilbert about my French fry-eating sometime,) could have eaten everything on the plate in three or four bites.

My supposed apple soup with buttermilk ice cream and biscuits was basically baby applesauce with another gloveless hand-rolled ball of ice cream and three thimble-sized squares of dough. I don’t know how we held in our laughter. On the way home, when we were discussing just how insulting this whole thing was, Sharon likened it to food at a baby’s party. She said, “Not even a two-year-old’s party–a one-year-old’s.” I said, “not even a child’s party–this wasn’t even enough food for a doll’s tea party!” 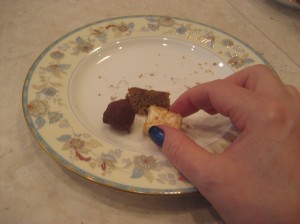 The three "petit fours." At least "petit" is the correct description of them!

Okay, so we finally came to the aforementioned “petit fours.” What a joke! These are the three pieces we got: 1) a miniscule ball of chocolate goop, which actually dissolved in a few minutes when I put it in my napkin to take to the car to get a close-up picture of, to share with you guys. 2) A thumb-nail sized marshmallow with shredded coconut. And 3) a sliver of tasteless brown cake from a basic cupcake-sized cake that was sliced into twelve pieces!!! The nerve of them!

And the whole time, Chika and David acted like they were working hard, creating in front of our eyes. What they were doing was constantly opening and closing the tiny refrigerators and freezers and taking out what they had already made and placing the morsels on pretty plates! They definitely could have just plated the non-perishable petit fours pre-opening and served them right away!

Instead, they made us sit there way after we wanted to leave, so that it looks like they’re working hard, and also to create a line of people waiting to get in, like something special and coveted is going on in there! (FYI–there were no lines either on our ways out or in, so that’s most likely a myth, as well.) The whole experience, from start to finish, should have taken about twenty minutes. Instead they held us hostage for about five times that! What a supreme waste of time, money, and blood boiling.

*Not her real name, but she’s so nice that she doesn’t want to be identified because she hated saying unkind things. So, she’s not only my smartest friend, she’s my kindest one, too! But I showed her this column pre-posting and she agreed with everything in it. And don’t even try to guess her identity because she’s not a regular cohort I’ve written about before.