I was so thrilled that I finally made it to this famous New York steakhouse this trip!   And also that I found-out that the owner is not the Bobby Van who was a song-and-dance man back in the day, which I had erroneously thought, (along with most of you, so stop chuckling,) ever since I’ve known of its existence.

We went there just by chance.  My friend Lauren and I were at an event whose invite told of appetizers, but instead served just cheese and crackers.  So, someone there recommended that we have dinner at the near-by Bobby Van’s on 50th Street. (There are several branches of them in the city.) And they got us into the very crowded, (especially for what my mother would call “a plain little Wednesday night,) restaurant.  We even got to sit and talk with the eatery’s general manager, Paul Modica, for awhile, to get the background of the place and his menu suggestions, which were great and appreciated.

Half an order of the amazing spinach and ricotta ravioli. OMG!!! All photos by Karen Salkin.

First of all, I don’t want my vegetarian readers to get scared away by the word “steak”; there are tons of non-meat items, including my favorite thing on the menu—the spinach and ricotta ravioli with sage butter! It’s Spumoni Garden good!!! (For those of you not in the know, the pizza at that Brooklyn institution is so excellent, I have to put on dark glasses, put my hair back in a ponytail, and close my eyes when I eat it, which has to be in silence. That’s what I’m comparing Bobby Van’s ravioli to!) I didn’t want those bites to end; I wanted to marry that dish! 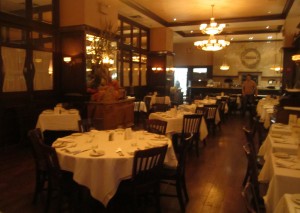 Before I get to the rest of the fare, let me tell you about the scene. The bar as you walk in was totally happening, with sports on the big TVs. The dining rooms are spacious and were packed, and I really appreciated the touches of seasonal décor. There was every kind of patron dining there and they all looked comfortable, especially us! (Why wouldn’t we be? We got excellent service from a team of handsome waiters, chief among them being John Burke, whom I found-out is from Rhode Island, my other adopted hometown, besides Los Angeles. And at the end, we met the excellent and amiable Executive Chef, Craig Jermin.) I was especially happy to find pads on the tables because, since I hadn’t planned on reviewing anyplace when I left the house that night, I had no paper with me.

As Lauren enjoyed her red wine, we attacked the interesting and varied bread basket. Since I had never been there before, and therefore wanted to sample a lot of dishes, Paul suggested a tasting menu, which was just perfect. We couldn’t have enjoyed so many different items if we ate full sizes of them.

Lauren said her crab cake was the best one she ever had! And she’s had a lot of them. The Harry’s salad, which included chopped shrimp, string beans, and bacon, three foods I absolutely love, was downright heavenly! Lauren couldn’t stop eating it long enough to comment on it, but she gave it three thumbs up, (which is hard to do with just two hands.)

We each got our own petite filet mignon, which Lauren dubbed “scrumdiddlyumptious.” (But I’m pretty sure she didn’t know just how to spell that. And extra credit to my readers who know who coined that word and where. Answer below the info at the bottom.) It really was melt-in-your-mouth, especially with the bernaise sauce.

Petite filet mignon and "hash browns" formed into a potato cake. The best!

As with most steakhouses, you have to order your own sides, which we did. Lauren went nuts for the creamed spinach, (which she said is famous,) but I had eyes for only the hash browns. But, they’re far from what you imagine when you picture hash browns. We had them as part of the tasting menu, so I didn’t get to see the full presentation of them, but I understand it to be a giant pancake type of thing. For us, they made them as small potato cakes, and let me tell you, I could have eaten just them and the ravioli and been the happiest girl in New York!!! (Maybe I’m a vegetarian at heart. On second thought, no, because I also loved the steak.)

I wish we had tried more dishes to tell you about, but they had to roll us out the door after all of that! But, not before dessert, of course. The weird thing is that I always find room for that course, and Lauren usually passes. But I really couldn’t muster more than a bite, and Lauren ate three of them!!! (And washed them down with “delicious” decaf.)

She said her favorite was Bobby Van’s signature twenty-one layer crepe cake. I was expecting a giant, tasteless concoction, (like the “Mile High” cake they do in LA at Gladstone’s,) but this turned-out to be a normal size cake, with layers that were slivers of flat pastry sheets with cream in-between. Lauren had fun pulling them apart to count them. (Oysh.) She said it was a “light and creamy comfort dessert.”

Next time, I’m planning to try the giant banana split that’s deemed “for two” by the restaurant, but you really need at least four people to polish it off, in my opinion. Or just Mr. X.

Answer: Children’s author Roald Dahl coined “scrumdiddlyumptious” in his book Charlie and the Chocolate Factory, upon which the Willy Wonka films are based.