Mr. X and I found ourselves in Santa Monica on a recent beautiful Friday afternoon. We were hungry, so I suggested we try the famous Water Grill. I had never even been to the original one downtown, so this was a treat.

But it was just okay. Nothing awful, but nothing special, either. For the prices, though, I was expecting a lot more.

The atmosphere was lovely. All the giant windows onto Ocean Avenue were open, and it was great to see, smell, and feel the ocean air, which you could do from just about any vantage point. For the unfortunate clientele whose seats face backwards, the whole back wall is windows into the kitchen, which many people find interesting. Even being a restaurant critic, I’ve never wanted to watch people prepare my food. But maybe being on display makes the cooks more honest in the cleanliness department. I can’t be sure about that, but at least it’s a possibility. 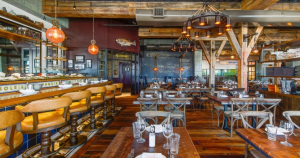 The wait staff was actually pretty good. But there were so many of them, in several capacities, that it was a tad confusing. Their pastel shirts, in different colors that I assume were supposed to differentiate their roles, were so close in hues that I couldn’t really tell them apart.

They constantly bussed the table, which I really appreciate, but they kept taking away food I was clearly still working on! It was mainly just bread, but it was really annoying to have to keep saving the bread and butter I was still eating! At least they brought me more, but they always grabbed away the exact piece I had been saving for the last bite! They really should be more careful. Every time I got a little piece of bread and butter exactly the way I wanted it, they ran over and pulled the plate away. (Mr. X just heard me writing that, because I’m using my voice dictation system, and he started laughing really hard. He always thinks you guys have to hear this stuff out of my mouth, rather than reading it. He, and many others, have been begging me to do my podcast already, so it’s coming soon; I promise. Stay tuned.)

We both had the beet salad, which was pretty good, but so is every beet salad I’ve ever eaten. Mr. X ‘s entree was Wild Copper River sockeye salmon, which he said was just “eh.” And he’s seriously a salmon connoisseur! He’s ordered it at several new (to him) places in the past month, and he deemed Water Grill’s to be the worst one!

I ordered swordfish, and it was good, but no better than the ones in Gelson’s service deli, which you get for less than half the price of Water Grill! The worst part is that it came with nothing but a bed of eggplant and olives, both of which I detest. So, I wound-up with swordfish and bread as my meal. (I know that I could have ordered a side dish when I saw that the fish was served basically by itself, but by the time it would arrive, my swordfish would have been cold, and Mr. X would have been long finished with his meal.)

There was only one dessert that appealed to me, but, at that point, I had eaten so much bread (because they kept replenishing it to make up for having taken away my half-eaten tidbits,) that I didn’t even want any sweets.

So, for us, Water Grill was just an okay experience, and one that never needs to be repeated. I know that you can’t fully judge an eatery by just a few dishes, (which is why my associates and I order so much when we’re doing a planned critique,) but that’s why this is a mini review. As I said, nothing great, but nothing awful, either. Just meh.

And here’s on picayune note: I always want to see what a restaurant’s restrooms are like. I assumed that the ones here would be really interesting, so I entered under where the big attractive sign was. But I was instantly disappointed. The doorway led you out to the generic restrooms in the lobby of the office building that surrounds the eatery, and you even have to use a code to get in. It ruined whatever magic I was experiencing by dining in a well-designed and appointed, upscale, beachy bar and grill.

What’s really odd is that, when I went to their site to get a photo for this review, you can’t copy the images!!! What’s up with that?! And when I tried to get them elsewhere on the web, all of them were blocked!!! I’m so glad I finally thought of taking a screen shot, or I’d still be searching!