The food at an actual Public School is better than at this Los Angeles restaurant chain! My friend and I had a very disappointing lunch there recently, and it was enough to make us plan on not ever returning. No one did anything very wrong; it’s just chow that isn’t worth the money. Nor calories!  And the whole experience was far from special.

Every time I was in that area of the Valley recently, (which is on the cusp of Sherman Oaks and Encino,) I checked to see if Public School 818 had opened yet. I was really anxious to try it already, mainly because of the cute name. (There are other branches in different areas of LA, and they each have the area code after the “PS” part.) I figured, with a moniker like that, it will have to at least be rocking an adorable interior. You would think, wouldn’t you?

The menu, which is where the school theme begins and ends.

But outside of the menu covers looking like old-fashioned notebooks, there was nothing else appropriate to the concept.

My friend Nikki and I, who have much different tastes from each other, shared three lackluster dishes. (Two were okay; they were basically just meh.) They all sounded good, so we had high hopes.

But those were dashed pretty quickly.

Nikki asked our server to please divide the salad for us. Instead, he brought the one big salad, and not even other bowls to scoop it into! Nor utensils for the job, even if we had had those extra dishes.  We had to ask three different people for the other bowls. The guy finally brought flat plates. So, once again we asked for the individual bowls. A girl walking by finally told us they don’t have small ones. Oysh. So, we said just bring us two large, which the guy should have thought of to begin with!!! But, alas, they brought us just one. And, by the way, there was enough dressing (which we had on the side,) for just a few bites. No matter, the dressing wasn’t even good anyway. 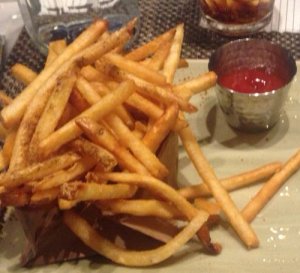 This is what our fries should have looked like to begin with.

By the way–it was the Tuscan Chop Salad.  Nikki did enjoy it, except for the dressing.  But, even though it had a bit of burrata cheese, my favorite substance on earth, I found it to be tasteless.  And, worse than anything, there were tons of olives in it, even though they weren’t listed!!!  I detest olives, so they were far from a welcome surprise. And, even if I was was not an olive-eschewer, they didn’t go with the rest of the ingredients. I brought the leftovers to Mr. X who basically hated it.

Nikki and I also shared the Crispy Chicken Sandwich, which was actually pretty tasty.  But, it comes with two sauces on it, and we asked for one of them on the side.  Guess if it ever showed up.  If you guessed, “Of course not,” you are correct!  Worse than that, they left them both off!  The worst part of this dish was the fries. The sandwich comes with fries, if you so choose, so we asked for them to be crispy.  But what we got were fries that were old and soggy.  I’ve rarely had worse ones.  I had to ask for them to be re-done, so this time, what they brought us were basically potato sticks.  They were definitely an upgrade, though, but they should have been done right to begin with!  When Nikki and I leave French fries over, you know the meal not a good one. 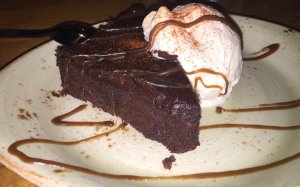 The tasteless chocolate cake. Notice all the sauce!

We decided we needed a dessert to cheer us up.  You can’t go wrong with dessert, can you?  Wrong.  You can at Public School 818.  They have no written menu for that course, so we had to rely on the descriptions of our half-awake server.  The one that appealed to us was the chocolate cake, that he said had a gooey interior.  Nikki specifically asked if it had sauce on it, because she’s not a fan.  He assured us that it did not, and re-iterated the wet insides.  But guess what we got?

Tasteless, weird-textured chocolate cake, with nothing in the center, but with tons of caramel sauce on top!  Ugh.  We both hated it.  A restaurant has to try really hard to come up with a chocolate cake that neither of us likes!!!

On top of all that, the parking situation is brutal there!  They have close enough, but not very convenient, valet parking in the rear, which is a bit of a walk.  They validate for up to only two hours, which, with that awful service, is not close to enough time!  That’s the only parking they told me about on the phone.  When I pressed the girl, she finally mentioned that they also have metered parking in the same place, and acted like I was a moron to not be familiar with the obscure street name she said it was on.  But it was far-ish away, in an altogether separate location, and very hard to find.  She also suggested that I park in the Galleria across the street, which isn’t nice to that venue. I’m sure the administrative office over there would be thrilled to know about that directive.

So, there you have it!  Public School 818–not good, not fun, not an easy situation.  The whole experience left an even worse taste in my mouth than the food did! And that was a feat not easily accomplished.