Trending
You are at:Home»DINING»DINING/MINI REVIEW: BEDFORD AND BURNS

This is a mini restaurant review because I didn’t try many dishes at the new-ish Beverly Hills bistro, Bedford and Burns.  But it’s worth telling you about.  And not in a good way. 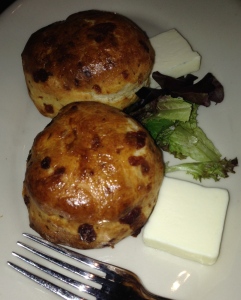 The tasteless Cheddar Biscuits. I put the fork in the pic, though, to show you just how big they are. Photo by Karen Salkin.

A pal and I stopped in for a recent Happy Hour.  An ad for the place had just popped up on my computer, and we were going to a play in that area anyway, so we decided to take a chance and try it.   And the bar menu got to me because of the Cheddar Biscuits.  It was like a flashing neon sign attracting me to them because I absolutely love every cheese biscuit I’ve ever had in my entire life!  Until now.

These were giant, which made my mouth water, but then I bit into one.  Tasteless.  Downright tasteless.  What a waste of calories they are!

The Margherita Flat Bread Pizza was not much better.  First of all, it was minuscule, as flatbread pizzas go, and not very tasty, either.  My pal, Carolyn, said it was overdone while I thought it was underdone.  No matter what; we could agree that it was not done right.

We had better success with the two other dishes we chose.  Carolyn liked the Chicken Spring Rolls, with Thai dipping sauce, which I thought were just so-so.  I was expecting the crunchy fried egg roll-type of spring rolls, but these were the spongey, opaque-material-wrapped ones.  They were okay, and looked pretty, but did nothing for me.  At least they were stuffed with a lot of chicken, which was a bonus. 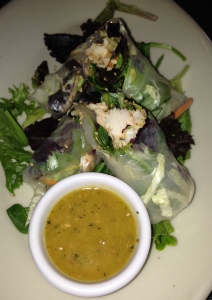 The winner was the duo of gigantic Chicken Meatballs.  I could have eaten just several of those, and called it a day.

They did do one thing that bothered me a bit, though.  They try to get you with the “water sympathy” trick.  When I asked for just a glass of water, the waiter said that, since it was Happy Hour, they had a deal on the big bottles of Fiji Water.  He told us that it was just $2., but didn’t leave the offer there.  In the same breath, he said something to the effect of, “And you’ll be helping with the water crisis in California.”  Granted, that is a good deal for the bottle, and we should all help with the drought situation, but they shouldn’t guilt trip us into buying it!!!

So, to sum up my experience at Bedford and Burns–“Eh.”  I would go back again to try their meatballs and spaghetti because I already love the meatballs.  But I feel the rest of the food should be better, not only due to the neighborhood and basic prices, but because of the pedigree; it’s owned and run by the children/grandchildren of the old Bob Burns restaurants founders. (Hence the moniker: It’s on Bedford and owned by Burns.)  I believe those eateries were big around here back in they day, (before my time in LA,) so the owner’s progeny should then serve better fare.

It’s an attractive enough eatery, with a more extensive Happy Hour menu than many others in the area. So, if you go for Happy Hour, too, just make sure to order not what we did, save for the ‘balls.