Trending
You are at:Home»DINING»DINING/LIVING TRIBUTE: TRIBUTE TO NATE ’N AL (WITH A VIDEO)
By Karen Salkin on April 17, 2020 · DINING, LIVING TRIBUTE

Now that passover is over, let’s talk about a non-kosher deli. Actually, perhaps the best one ever. 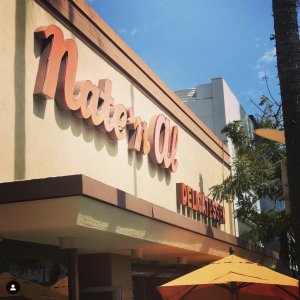 We Angelenos all knew it was coming. But we were not prepared.

And we’re still unsure of the status of the seventy-five-year-old Beverly Hills staple Nate ’n Al. I’ll explain in a second, but here’s my latest YouTube video on what this supreme deli has meant to me over the years, and what I’ve gotten out of the experience, in more ways than one: www.youtube.com/watch?v=BmF4hgmmg0w.

About a year ago, word started circulating in Beverly Hills and foodie circles that Nate ’n Al was closing. For good. So my friend and I went there after a movie matinee at the LA Jewish Film Festival because that event made him crave chicken soup and a knish! (It was actually Cinco de Mayo, and we were on the way to a Mexican food fete, but after seeing the film about Jewish food, he made the executive decision to deli it!) 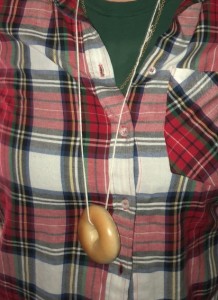 Karen Salkin modeling her Nate ‘n Al’s mini-bagel necklace. She was also rockin’ the colors of the Mexican flag because that day  was Cinco de Mayo. Photo by Mr. X.

We had heard that Nate ’n Al would be closing at the end of 2019, and since this was May 5, 2019, we figured we had time to pay it at least one more visit after that one. But the waiter, (who was young and quite the opposite of the usual life-long waitresses who worked there,) gave us the happy news that the eatery would just be moving to a new location around the corner! And then he made me a mini-bagel necklace to celebrate! (It’s something they did for just kids, but, ya know. And I’m not saying if I still have it!)

So, the year went on, and then in the Fall, I told a very dear older woman friend of ours that Mr. X and I would take her to the original before it moved. Places like that are never the same when they change spaces. It’s never just the food—it’s also the ambiance. But guess what? She shockingly told me she’d now rather go to IHOP!!!

So, as the end of the year approached, I kept trying to make time to pay one last visit to what I consider to be the real Nate ’n Al. [Note: By the way, I, along with most of Los Angeles, have always erroneously called the place Nate ’n Al’s. With a final “s.” I honestly did not know the difference until I was choosing pictures for this article! And I even had featured its exterior in the opening credits of my TV show!!! I’m shocked that I missed the correct moniker for all these years! Nay—decades!] 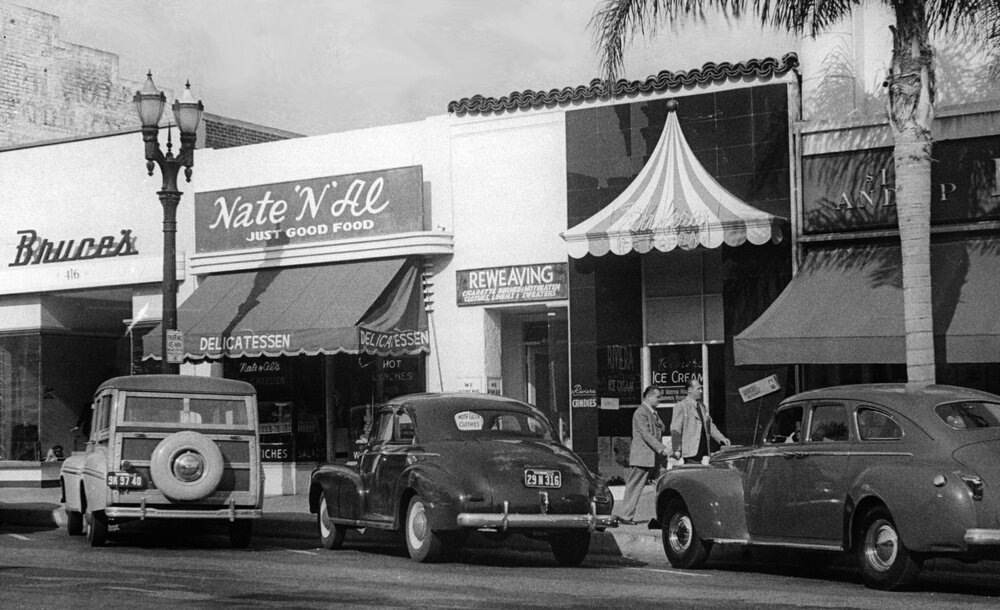 What the place looked like when it first opened in 1945.

And then, all of a sudden, in the middle of this social isolation, came word on March 28th that the deli was closing the very next day! And, as with all eateries right now, they were open for pick-up only, anyway. You can hear my whole story about what Mr. X and I carried on in my video right here: www.youtube.com/watch?v=BmF4hgmmg0w.

And, then, after all that, despite the ownership announcing the closure on their own Instagram page, they amended their statement, blaming the media for the incorrect “closing forever” perception! (Who do they think they are, blaming the media–Trump????) 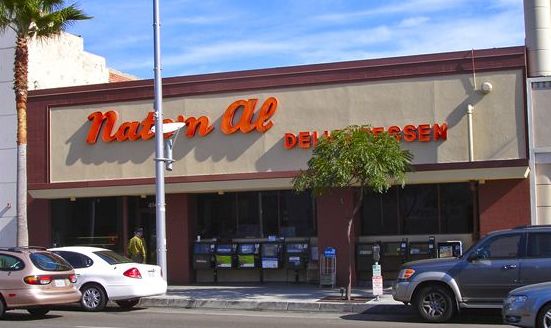 This is what they wrote on their website, (without any capital letters and missing a few commas): “the media has incorrectly reported that nate’n al’s is ‘gone forever.’  as we originally stated, we couldn’t fully guarantee the safety of both our customers and employees for take-out and delivery during this pandemic we have chosen to cease that service. our current lease is expiring shortly and we have encountered major difficulties with the city of beverly hills who would have been our new landlord on canon drive. it is the intention of the current ownership to get through this crisis like every other restaurant and make the right decisions at the right time. our goal is to keep the nate’n al’s tradition alive.”

So, even though they are in great need of an editor for any future writings, there is still hope. And since nothing in this world is guaranteed at the moment, who knows that the future will bring, not only for Nate ’n Al, but for the entire world! 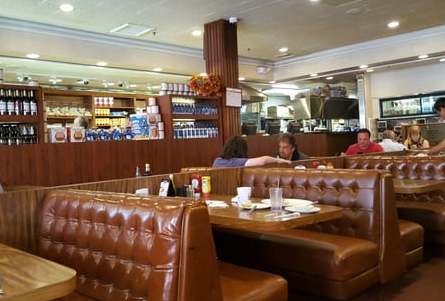 And let’s not forget the iconic interior.

So, for now, I thank Nate ’n Al for all the delicious meals, fun, and fabulous memories they’ve given me though the years. And tell them I look forward to continuing the relationship as soon as possible, for all of us.

Reminder: For what they’ve meant to me, with some stories I wish I had not told, here’s that link to my Youtube video about them again: www.youtube.com/watch?v=BmF4hgmmg0w.