Being pro-choice, (as I feel everyone should be—just sayin’,) and a major restaurant and food lover, I was very happy to attend the Planned Parenthood LA Food Fair at the Barker Hangar in Santa Monica Airport last week. And I brought along my trusty sidekick, Alice, to serve as my royal taster! 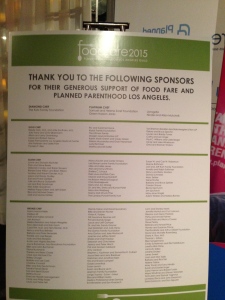 I couldn’t believe this was the thirty-sixth year(!) of this fun event, because I had never heard a single word about it until this one! Nary a peep. And not only have I been a restaurant critic for a long time, I’ve been restaurant-obsessed since I was a little girl, and in this town since I was a teen-ager whose dream it was to dine in every restaurant in LA, so it’s kind of a shock that no one ever mentioned it to me before. (So, major props to this year’s PR people, for getting the word out there!)

Judging from the big crowds, (especially in the evening session,) everyone in town knew about it this go-round! And they all appeared to have as good a time as we did.

Even though I’ve been reviewing LA restaurants for two decades now, many of the ones feeding us at the Food Fare were new to me. I still loving go out to eat as much as I always have, but I’ve realized there’s more to life than that, (and so much more to share with you on a daily basis,) so, in recent years, I got away from being solely a restaurant critic. This event made me realize how much I’ve been missing, and how much Angelenos love their eateries!!!

I was happy to bump into many old pals, and discover new fans I had never before met. And become a fan myself, of all these talented chefs! 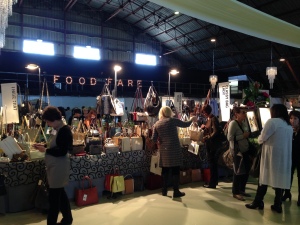 Part of the shopping boutique. Photo by Karen Salkin.

The Food Fare featured two sessions, day and evening, each with its own admission, and both with a totally different vibe from the other! The space looked the same, and many of the auxiliary components stayed the same, such as a complimentary photo booth, raffles, and tons of shopping, a percent of the proceeds of which went to Planned Parenthood LA. I got a L’Duex jeweled ponytail band, that you can keep on your arm as an attractive bracelet until you need it for your tresses. And, boy, did it come in handy that very day!

As Alice pointed-out, the ambiance of both sessions was really happening. They decorated the hangar beautifully, with everything from chandeliers to a big seating area with comfortable couches. And knowing that one would find it difficult to eat a bowl of ice cream with all the trimmings, courtesy of Dandy Don’s, on one’s lap, they put in tables and chairs off to the side where the cart was.

Alice said, “There was so much buzzing. Everyone was so into the moment. It proves once again that LAers love their food, especially when it’s the best food. This was the most decedent dining experience!” 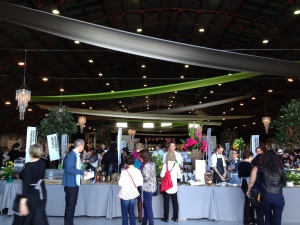 The entrance. Photo by Karen Salkin.

There were more caterers participating during the day, with more fare from actual restaurants at night. And they were all delicious!

Of course, we had our favorite items. My two from the day sesh were the little spinach-potato knishes, in ball form, from Factor’s Deli, and The Mark’s little tomato soups, that actually were the winners of both sessions for me! They were, indeed, mmm mmm good!

At night, my faves were Westside Tavern’s grilled cheese with braised short ribs, and Pizza Antica’s arancini, which are fried balls of rice, and in this case, mozzarella cheese. The name is Italian for “little orange” because they resemble—guess what?–little oranges! Duh.

Alice didn’t separate hers by session; she just told me what she loved, overall. They were chocolate chip cookies with bourbon milk from The Tripel, (whose owner-chefs, husband-wife team Brooke Williamson and Nick Roberts were being honored as Chefs of the Year,); Chaya Venice’s “just spicy enough” ahi tuna tartare; El Cholo’s “moist and delicious” tamale with “sweet and savory chocolatey” mole sauce; and “the best tuna hand rolls ever” from Sushi Roku.

We had a lovely experience at the end. Alice tried Beachy Cream’s strawberry balsamic swirl ice cream sandwich bites, and went nuts for them! She was surprised because she’s not a strawberry fan, and was a bit leery about the balsamic part, which is an unusual ingredient for ice cream. She said they were “so decadently creamy and delicious.” But the best part is that we discovered them at the very end of the night, and the nice people who manned their cart were going to have to discard the rest. As people who hate to see food wasted, we each took several with us, in the little bags they had come in. I gave mine to Mr. X, of course, and he deemed them “difficult to stop eating.” (I don’t eat strawberry ice cream, no matter how delicious my pals say it is, so I was out of this one.) Alice, who’s tiny and skinny, finished her whole bag by the time she got home, despite being totally full! So, they were a big hit all around. 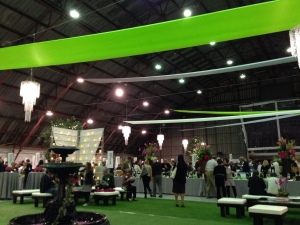 I have one big suggestion for the organizers of next year’s event: The names and info of each eatery were in the program booklets that we each received, but they should put in their dishes, as well!!! Everyone was just grabbing the tidbits, so I’m sure many, especially the drinkers, had no idea from whence their favorites came! The name flags were on a different level from the food, so I’m sure many didn’t get immediately noticed. When people were suggesting menu items for me to sample, they either pointed, or gave the location of the booth. Not one person used a name! (When they start doing this next year, remember that it was my idea!)

Names of dishes or not, day session or evening, buying a boutique item or just tasting the food, This Food Fare was one of the foodie events of the year! So, no matter how they do next time, I’m in! And I hope you all are, as well.