Trending
You are at:Home»DINING»DINING: UMAMI BURGER–THE WORST BURGER EVER!!!
By Karen Salkin on July 23, 2010 · DINING

I had to put the bottom line in the title, in case you don’t read this whole review. I just got back from one of the absolute worst restaurant experiences, on every level, and my fingers, that usually type really slowly, are flying over the keyboard, so anxious to be able to prevent even one of my readers from wasting their money at Umami Burger. (Not to mention their calories, blood pressure, and precious time.) 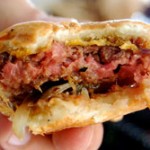 I took copious notes, on their fine paper tablecloth, so I can portray to you word for word what my pal Caryn and I thought. It was both of our first time there, and we were all excited because several (obviously tasteless) folks had recommended it. I don’t even know if any of them have actually had the horrendous food, or if they just think it’s the hip thing to say. BTW–I don’t get the supposed hip factor at Umami, either. There were no “beautiful people” in attendance the day we were there–just basic hungry folk.

So, the main branch is on LaBrea and 9th Street, in plain digs, which really never matters to me in a burger joint. I was surprised that it was table service; I had thought it was an order-at-the-counter sitch. So, the surroundings were lacking, but we didn’t mind at all.

We excitedly ordered two of the nine burgers, and asked for nothing special except for medium, rather than the medium rare they do automatically. Caryn likes hers rare, as a rule, but said that these medium rares were too pink for even her taste! I think that was because they were just so mushy. I felt like I was choking as they went down my throat. And my teeth were caked with gunk after, until I got home and immediately brushed them. I’ve never had to do that since high school, when a less-than-attractive blind date my mother fixed me up with tried to shove his tongue down my throat.

So, anyway, the SoCal Burger was truly the worst burger I’ve ever had in my entire life, and that includes all school cafeterias, where they were known as “hockey pucks.” I’d actually prefer to eat a real hockey puck over another Umami burger! You know when you’re really hungry, which we both were, you think everything tastes great? Well, I finally found the exception to that rule. (I took mine home to Clarence, and since he’s a dog, he didn’t mind it.)

The Triple Pork Burger was a little better in the actual meat taste, but had the same mushy consistency and bad cheese and sauces, so it was pretty disgusting, as well. The skinny fries were okay, but I suspect they were the coated ones that inexpensive eateries often order frozen from an outside company. If they were not those, I’d be really surprised. I actually really like those fries because the coating makes them extra-crunchy, but I know that my potato purist pals won’t eat them.

The worst by far were the onion rings. They were swimming in oil! My lip is curling just writing about them. I’ve had greasy onion rings before, but I swear, never this bad! They made me think that the BP oil spill had made it’s way to Los Angeles! The establishment should serve a side of talcum powder with them, to soak up just a bit of the grease. Ugh. They were truly inedible.

When we told our waitress about them, she straight-facedly explained, “They’re fried.” Like we never had fried food before! She had several other bon mots, like when I requested that our just-ordered fries be crispier than those at a neighboring table, and she said, “We can’t determine the temperature of the fries.” True story! No light bulb over her head, to say the least. (I don’t expect servers to be Rhodes scholars, but give me a break here.)

The funny thing is that I had been admiring the water glasses, pre-meal. They’re semi-flexible plastic, with an indentation for the thumb, which I thought was pretty clever. After trying to eat an onion ring, Caryn said, “Now I know why they have that finger grip–if you eat the food here, your hands will be too greasy to grasp the glass!” I hear ya, babe!

Speaking of water, when they refilled mine, it was tepid, with no ice. This wouldn’t have bothered me much in any other situation, but each little thing just added to our exasperation with the experience.

Oh, the best was that they have “Umami Ketchup” listed on the menu (for which you have to pay an extra $.50.) When I asked our waitress what it was like, she told me that she couldn’t give me the secret recipe, for which I was not asking. But once I tasted it, I knew why they wanted to keep it a secret!!! It tasted like poison! Seriously. Cough syrup tastes better than that.

Another area of amusement is that someone had warned me that the burgers were small, especially for the price. While I was eating them, I was grateful that they’re so tiny because who wants more of that awfulness???

Why did we even continue to eat this bad food, you might ask? Caryn asked to leave after the first bite and go someplace else, but a) I really didn’t want to make a fuss, b) I was so starving I could have blown-down just about anything at that point, except the onion rings, which we couldn’t do under any circumstances, and c) I was really time-constrained that day, and just wanted to get it over with.

But, as dreadful as the fare was, the piece de resistance came at the end. Caryn proffered her credit card, and when the bill came back for her to sign, it carried someone else’s credit card! When we pointed it out to our blank waitress and another non-smiling guy, they told us…we were wrong!!! Like Caryn doesn’t know her own name! We had to convince them of their mistake, (a mistake, btw, which in and of itself wouldn’t have mattered much, but after the whole horrible experience, this was the last straw,) and they had to go searching for her card! How utterly clumsy of them. (And with no apology, to boot.)

While Caryn was signing the bill, the waitress came over and said, exactly, “Did you get the right card figured out?” I just laughed by accident because, as I told her, we’re not the ones who needed to figure it out!!! She didn’t even get that remark! So, rather than try to explain it to someone who would just not get it, we left, chuckling as I told her she could just read it all in the review.

As I was speaking to an actually lovely girl employee in the parking lot, a big man came flying out, shook my hand, and told me he was the manager. I assumed he was about to apologize for all the problems. But no–he had come out to challenge my reviewing credentials! I was too shocked to explain that it doesn’t matter whether or not I’m a restaurant critic (though, as we all know, I am!,) and that no patron should have gone through what we just had. When I saw that wasn’t the case, I told him politely that I’m not going to debate this with him, and got in the car. His clever retort? “I’m not going to debate this with you.” Gee, I wonder where he heard that before? (It’s the exact words I had just said to him, in case you’re the waitress who didn’t understand anything.)

He actually scared Caryn. He was so belligerent, she thought he was going to hit me! As the manager, if that’s what he really is, he should have apologized for any inconvenience, especially arising from the credit card debacle, and perhaps offer us at least a little take-out sweet from the counter, that we wouldn’t have accepted at that point anyway. But that’s what restaurant managers are supposed to do–placate the customers, not challenge them.

To sum up, I think Caryn put it best: “There was not one redeeming factor to the Umami Burger experience.” Amen to that.

No info here because no one should ever go there!