Trending
You are at:Home»DINING»DINING: TOI ON SUNSET
By Karen Salkin on August 27, 2013 · DINING

After a recent screening nearby, my friend Maria suggested we eat at Toi on Sunset. I had passed by it about a zillion times, and although I was attracted by the pink and black sign out front, I had just never made the time to eat there before. I’m so glad we remedied that situation that night. It appears I’ve been missing out on one of the most colorful and tasty experiences in town. 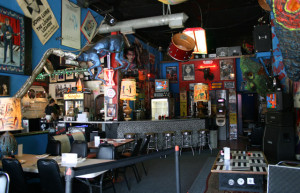 There is so much going on in this restaurant, visually! Even though we were there at night, so it was pretty dark inside, I just didn’t know what to look at first. It was like an explosion of art, with all kinds of textures and colors and designs. Maria marveled, post-meal, that, “The ambience is as eclectic, sassy, and fun as the food!”

The giant screen playing cartoons was a highlight for me, although it was a little distracting to be facing while I was trying to talk to my dining companion. (It’s perfect if you’re with someone you talk to all the time, and therefore you don’t have much left to say. But since we had tons to catch-up on, not to mention dissecting the film we just saw, we moved to another section before we ordered. I have a feeling we liked our conscientious waitress, Rachel, better than we would’ve liked the waiter for the first table we sat at, so it all worked out perfectly for us.)

The ambience is just something you need to experience for yourself, so let’s move on to the food. While we were pretty hungry, we had no idea how much we were really ordering. The portions are humongous! Since, as I stated earlier, I had never been there before, I had no preconceived notions. My pal ordered an appetizer, soup, and a main dish, so I followed suit. That seemed like a reasonable amount for two moderately hungry girls. (And of course, being the fabulous restaurant critic that I am, I do like to sample as many dishes as possible at a place that’s new to me.) We were aghast when we saw the amount of food that came to the table. It would have fed four easily, and then some! Very generous of them, especially because the prices are in line with other Thai places in town.

The menu is pretty extensive, so it was a tad hard for us to narrow down, but we were proud of ourselves for picking all winners. Maria started with the grilled Chicken Satay on a skewer, which comes with peanut sauce and cucumber dip, and even with both of us working on it, we had one skewer left-over to take home. The chicken was juicy and tasty, and she said it was one of her favorites. My mee grob, (which I’ve seen before written only with a “k” rather than a “g”, but it’s the same dish,) was out of this world! If you’re not aware of this dish, it’s crispy noodles with shrimp, and in this case, chicken, too. If this is all I had eaten that night, I would’ve still been a happy foodie. 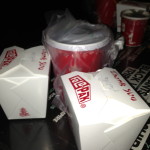 This is funny–this is the only picture we took of the whole meal because we were so busy enjoying the food that we forgot to take pictures of each dish! I didn’t think of it until after we started packing-up the many leftovers. Photo by Karen Salkin.

We then moved on to the soups. Rachel put two little bowls on the table for us, and I assumed they were for our portions of soup. But instead, she brought two giant tureens of soup, and the bowls were just for us to eat as much as we wanted out of. Needless to say, we each went home with almost the entire contents of the tureen! I went with the basic wonton soup, which was excellent and chock full of white meat chicken chunks, while Maria went with the tom yum kai, which is a hot and sour clear broth with chicken, mushrooms, and lemongrass. She told me that she loved it so much that she “truly had to force” herself “to stop eating it so that” she “would have room for” her entrée. That’s actually exactly how I felt about my mee grob appetizer! (You can get the mee grob as an entrée, if you like, but I still think getting it as an appetizer is a better idea; then you get to try another dish as your entrée.) 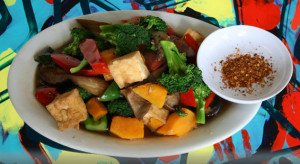 When I asked Maria to write just a few words about her entrée, (which I didn’t sample myself because, being the picky eater I am, I’m not a fan of any of the ingredients, thus proving this place truly does have something for everyone,) she instantly became my new best junior reviewer by writing me this missive: “Because I started with the chicken satay, and had chicken in my soup, I opted for the eggplant, pumpkin, and tofu vegetarian entree which is unique to Toi, and truly out of this world. There is one special ingredient that, while I cannot place, is just fabulous; it gets me back every time.” She also noted that, “This dish is served with Toi’s special brown rice, which really is special.  It’s a combination of black and brown rice, and aside from being delicious, it just tastes healthy, and feels good!” She also loved that the dish was “seasoned with a light soy and garlic sauce, and also featured bell peppers and mushrooms. And was delicious!” 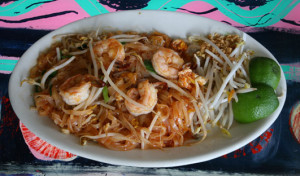 I chose the basic pad thai as my entrée, which they were kind enough to make less spicy for me. It was perfectly seasoned, and the shrimp and chicken in it were generous. Of course, as with the rest of my food that night, it took me multiple sittings to finish it.

You would think that we were too stuffed for dessert that night, but you’d be wrong. It was interesting that for a Thai restaurant, Toi offered several different cakes, along with the ethnic basics. As tempted as I was by the chocolate cake, I just had to go with the sticky rice with mango, which was a wonderful rendition of it, one that Maria declared a “must!”

Dinner at Toi after a nearby screening was just the perfect Sunday night experience. But I have a feeling that lunch or dinner any day or night of the week will be just as excellent. I think I’ll do lunch next time because I really do want to examine all of the artwork. And watch some daytime cartoons while I’m at it.