Trending
You are at:Home»Uncategorized»DINING: THE STAND
By Karen Salkin on July 25, 2011 · Uncategorized

I’ve been reviewing restaurants for so long that I can usually dine at a place just once to be able to either pan or laud it. But this review is akin to the ones that heavy male critics write because I’ve eaten at the hot dog chain The Stand several times, and at two different locations.  I’ve picked-up from both, as well.  So, I know of what I speak. 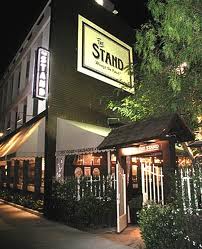 I must say that I’m always a little surprised by their popularity. Their prices are far from good, except for Mondays after 5pm when basic “Stand Dogs” are just $1. Hey, I can eat a Gray’s Papaya dog in New York for seventy-five cents and be happy! But they’re not fabulous ( at either place, actually) and the rest of the food is so-so at best.

By the way, this review is really all about the food; unlike at other horrible eateries, like Unami Burger, I don’t have any quarrel with the personnel or hype, and I haven’t had any bad experiences here. I’m just reviewing the food. And ordering snafus, come to think of it, which I guess is a personnel problem, after all.

Last weekend, Mr. X and I did a pick-up from the Encino branch, and only one item was good, so he asked if I was going to review it.  Good idea, sir! I hope this helps those of you who haven’t been there yet.

The basic dogs are really okay, but far from delicious. The fun part is that there are a variety of condiments from which you can choose as many as you like. Specialty toppings, such as chili and cheese are extra, but not much.

The problem with the dogs is that they never come the way we ordered them! This time, we ordered ten, and to make it easy for them, we said “all beef, all grilled really well, and all the buns grilled, too, please.” I repeated that a couple of times, the girl repeated it back to me, I stressed all the grilling again, and we hung-up. They’re always well-packed in big boxes, and I’m embarrassed to go through the boxes and check-out the cooking, especially if it’s a dollar day. I figure that this place’s specialty is hot dogs, so how can they mess it up, right?

Wrong. This time, as usual, they got the whole dog order incorrect, in one way or another. They were barely grilled at all, and the buns hadn’t seen heat of any kind—they were fresh from the bag. Very disappointing. On top of that, all Mr. X had requested on his was deli mustard, and lots of it. There was a thin, short squiggle on each one, which I can imagine was frustrating. He said he’s not interested in ever eating these again, which is unusual for someone who’s not food-obsessed like I am.

Except for the lack of grilled-ness, mine were okay, but, as with his, just a tiny amount of my choice of ketchup, although I had said “A lot of ketchup.” That was no big deal because we always have ketchup on hand, (who doesn’t?,) but the only reason Mr. X ever liked Stand Dogs in the past was because of the mustard!

Our real dissatisfaction was the side dishes. Their fries are beyond weak, and the baked beans are seriously inedible. There’s something weird in them, that has a meat-like texture. I had ordered large side dishes to look not cheap, but they were each just a waste, except the mac and cheese, which was semi-good. Not great, but passable. The sweet potato fries had good enough flavor, but got limp in about five minutes, which, as I’m sure we all know, is disappointing. The ranch dressing that came with them was really good, but they put in enough for just half the order!!! Why not be generous, just in case? How much could a dollop of dressing cost them?

So, that’s it. If you’re near-by on a Monday night, the dollar dogs (and free sides of pickles,) will do in a pinch.  But, at all costs, even if they’re free for some reason, stay away from those dreadful beans!  And I heavily suggest you stand there to be sure they’re making the dogs  correctly. Hey—maybe that’s why they call it “The Stand” to begin with!