Trending
You are at:Home»DINING»DINING: THE ROOF ON WILSHIRE
By Karen Salkin on March 14, 2012 · DINING

THE ROOF ON WILSHIRE

This isn’t a restaurant review per se. It’s the story of how to run a business, which other execs should take note of! Since I do so much more in this E-zine than just restaurant reviews, although that’s what I first became known for, I’ve been somewhat out of the loop in that category. I’m not always up on what chef goes where or won what award or who the new owners are. Heck, I didn’t even get to Craig’s until my January 14 birthday!

So, I really didn’t know anything about newish eatery The Roof On Wilshire except that I was surprised to see a boutique hotel, that reminded me of a mini W on Chicago’s Lakeshore, when I paid a recent visit to my dermatologist. (No worries—my skin’s still great, knock on wood.)

So, when Mr. X and I were doing errands in that area recently, I suggested we give it a try. It was surprisingly lovely in that sort-of industrial area of Mid-Wilshire, although it does seem to have become somewhat hip and happening in recent months. My old best friend had an apartment near there, in my clubbing days, and we had to leave the area to go anyplace decent. Ah, those were the days! 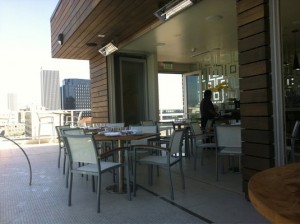 So, you go through the tiny lobby, up two elevators, and come out on a beautiful rooftop, complete with pool, umbrella-ed tables, and heaters. Unfortunately for us, it was a pretty cold day for LA and we were wearing thin shirts. So, we reluctantly decided to leave. I explained to the hostess (whose first day on the job it was!,) and she offered us one of the very few tables inside. We felt bad to her if we didn’t stay, even though the whole ambience is missing in there, so we decided to just go with it, foregoing the lovely view of the city.

But things were just not working out for us that day. For some reason, no one ever came over to take our order. I asked the hostess, a couple of waiters, and even a few busboys, to no avail. Shockingly, I didn’t get upset or even think of leaving. But it was a really bad day for us to just be sitting there, accomplishing nothing at all. (They never even offered to re-fill out waters, either, or ask if we wanted anything else to drink, which we did.)

All of a sudden, the guy who seemed to be in charge came over and apologized and said he’ll help us. When I found-out he was the owner, Jay Perrin, I told him that it was okay and we’ll wait some more, but he insisted. I realized they were new-ish, thus working-out the kinks, and just went with it. It was Dine LA week, and they were participants, so we ordered off that menu, just to make it quick and easy.

But it just wasn’t our day. While Mr. X’s salad was excellent, my was off. The combo of chopped ingredients was gorgeous, but the dressing was super-lemon-y and very spicy, though no one seemed to know why. I think others may have loved it, though. And we ordered our burgers medium well, but they came medium rare! Eww. Mr. X ate his anyway, which was nuts, but I had to, apologetically, send mine back.

All of a sudden, the chef, Eric Greenspan, (who I later found-out is very famous in the culinary world,) emerged from the kitchen, apologizing to me and saying the meal is on him because things weren’t working-out for me!!! How unbelievably nice is that??? I actually protested, and told him that I wasn’t the least bit upset, but he insisted. 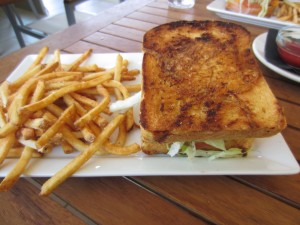 So, to the rest of the food: the burgers and fries were really attractive and delicious, once we got mine worked-out right. And the chocolate pound cake with peanut butter sauce was almost perfect, but could have used more sauce, though that might have made it less artistic.

At the end, while we waiting for a check for Mr. X’s meal, which we assumed we were getting, Jay came back over and said the whole meal is on them and apologized once again. Mind you, I’m pretty sure they didn’t recognize me, or know anything about me, and were just comping it because it was the right thing to do. Those guys are mensches. And smart businessmen.

The truth is, if they hadn’t made me aware of the difficulties that day, and done something about it, I would have thought that that was the way the experience there always goes, and would have washed my hands of it, with a bad taste in my mouth, figuratively and literally. But, with their pleasant handling of the situation, I definitely plan to pay them a return visit. But on a warmer day. And with more time.