Trending
You are at:Home»DINING»DINING: THE FLATS RESTAURANT OPENING PARTY
By Karen Salkin on July 31, 2017 · DINING

My friend Lisa and I are always happy to discover new eateries, especially in Beverly Hills, as is the case of The Flats, whose opening party we attended last week. 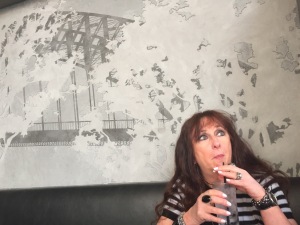 Artist Lisa loved this wall behind Karen Salkin, so she just had to snap it, (while Karen admired the lighting sculpture above.) Photo by Lisa Politz.

The place was packed! We were glad to have procured seats right under the beautiful lighting sculpture that commands the side of the room with tables, (as opposed to the bar area on the other side.) (It’s the one in the pic at the top of this page.)

This is the most different menu that either of us had ever seen! It features mainly flatbreads along with almost a dozen starters, and there are also a handful of salads thrown-in. Nothing is usual, though. 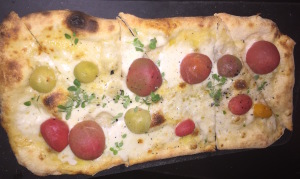 We were really looking forward to sampling a lot of their signature flatbreads, which we were told would be passed all night long. But, alas–they brought only a duo of varieties to our table. (We did get to at least see some others as they whizzed past us to other guests, but that only made us want them more!) Neither were my choices, so I left them up to Lisa. She liked the atypical margarita one. All the flatbreads are made like rectangle pizzas, but they’re flatter (hence the moniker “flatbreads!” Duh.) And the toppings at The Flats are different than the norm. For example, in place of tomato sauce, this one had a few round several-color actual tomatoes on it.

We appreciated that the owner encouraged us to order several starters off the menu, so, even with the dearth of flatbreads to our table, we did not go hungry that evening. 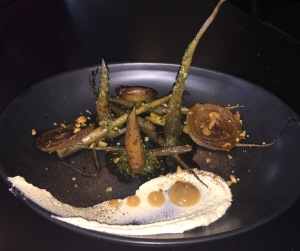 The carrots. Photo by Karen Salkin.

Those, too, were all very unusual. Each appetizer is made up of ingredients I’ve never seen put together anywhere else. It’s all very unexpected. For example, Lisa’s favorite was warm baby carrots which arrived in a big bowl with cippolini onions and chopped macadamia nuts. (I’m glad they told me they were carrots because they were green! And the presentation looked like an alien space sculpture, like something out of Close Encounters! And I mean that as a compliment.)

The dish that was the closest to being normal was the pork meatballs, which I could have eaten a ton of. They were very flavorful and delish! 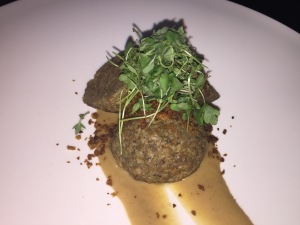 The meatballs. Photo by Karen Salkin.

The creativity does not end with the food; the “potent potables” menu continued that theme. We all know that I don’t imbibe, but Lisa ordered the Bucho, which was primarily tequila and bitters, and she said it “grew on” her.

Oddly, there were no desserts, but I have a feeling that will change now that The Flats is open.

So, next time you’re craving sort-of a pizza, but not exactly, you’ll know just where to go!