Trending
You are at:Home»DINING»DINING: REDWHITE+BLUEZZ
By Karen Salkin on August 26, 2015 · DINING

I had been to this fun restaurant many times before, although always for a party, both pre- and post- shows at the Pasadena Playhouse.  But I’m a big ladies-who-lunch kind-of gal.  So, when I heard that they were just beginning to serve lunch, I wanted to try out that menu before the new building across the street gets populated.  Those new tenants will be lucky to have redwhite+bluezz right across the street! 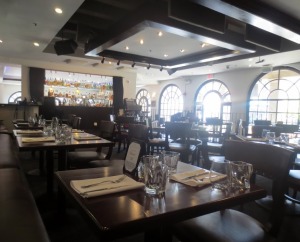 Part of the interior of redwhite+bluezz. Photo by Flo Selfman.

I had just re-connected with my very fun old pal, Nikki, who eats lunch out just about every day, so I grabbed her, Bonnie, and Flo to come enjoy a lovely lady luncheon there. It was the perfect group. And venue for us, too!

I had not realized how reminiscent of New York eateries the interior is until one of my friends pointed it out.  How apropos for a place next to a theater!  The bar area (manned by Eric that day) is super comfortable; I had a hard time tearing myself away from the Yankees game that was playing on one of the big-screen TVs!  All three of the ladies wanted to sit outside on the umbrella-ed patio, but I always need to be in air-conditioning, and what the Queen wants, the Queen gets! We were all happy inside, though, and our waitress, Becca, made us all feel at home in there. 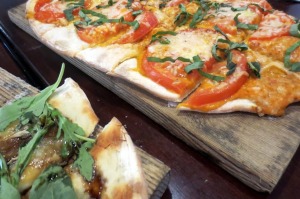 A bit of both Flatbreads we loved. The pear and brie is just peeking out a bit. Photo by Flo Selfman.

At the suggestion of the wonderful manager, Christopher, (who studied Culinary Arts at the acclaimed Johnson and Wales University in my second adopted home of Providence, Rhode Island, so we know that he knows his stuff!,) we began with two of their trio of flatbreads.  They were so gigantic that we could have made a meal out of just those!  (But, as this was their brand new lunch menu, we wanted to try as many items as we could!)  We all agreed that the basic tomato-basil-garlic flatbread was delicious, and very substantial; perfect for sharing.

The sort-of sweet pear and brie one was such a fun surprise! Nikki said it was “killer!,” and added that it was “pretty,” (which does always matter with the food you’re about to eat.) She loved the crust, (which is great because, opposite of me, she’s a crust girl.) Bonnie said it was a “delicate balance of the pear and brie.” Flo pointed-out that the pears are caramelized, which might be what made it so deliciously sweet. We all thought that it was a very innovative dish, and a great sweet alternative to regular flatbreads. It was an extra-special treat because none of us have ever seen it anywhere else. 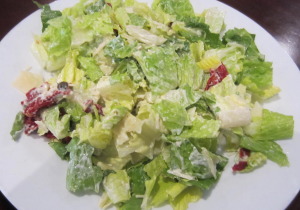 The Caesar. Photo by Karen Salkin.

Then we moved on to the salads.  We all loved the non-traditional Caesar.  In addition to the usual ingredients, the one at redwhite+bluezz comes with sun-dried tomatoes and crispy capers. Nikki said it was all a “lovely combo,” while Flo added that it was “very light.”

Nikki had the Chicken Cobb all to herself, as her main dish. She wanted me to tell you that she is a self-admitted salad snob, and she “loved, loved, loved” this one, especially because of the roasted cherry tomatoes, which she said are “very different.” 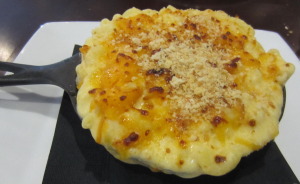 We all were interested in the Mac ‘n Cheese side, which is served in a piping hot skillet. We were thrilled that it was almost big enough to be a meal unto itself.  Nikki went the most nuts over the smokey flavor. She’s a Texan, (which means she knows her mac & cheese,) and she really flipped over it, declaring it to be the “best she’s ever had!” And we all loved the crispy topping.

We also shared the Garlic Fries, and I’m using the term “shared” very loosely—I ate just about all of them myself! I just could not unhand them. They were so perfectly well-done that I didn’t even need to dip them in the garlic sauce that came on the side. But when I mixed them into a little of the sauce that came with my short ribs, (that I’ll tell you about in a second) the result was downright magical! 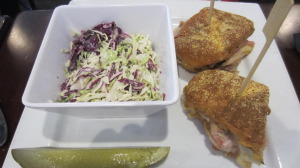 The Cubano and homemade cole slaw. Note the roll. Photo by Karen Salkin.

We were seriously full by then, but for your sake, dear readers, we plugged-on with more food. There are a few cold sandwiches, which are perfect for lunch, and many hot ones that Flo deemed “very interesting.”  She wound-up choosing the Classic Reuben, which comes with a very generous serving of the meat.  She said the “differently-seasoned” corned beef was “succulent,” and the Swiss cheese and sauce “made for a tasty Reuben.”

Bonnie went with the Cubano, and noted that the sweet corn hoagie it’s served on is “wonderful!” The sandwiches come with your choice of salad or cole slaw; they both went with the slaw, which Bonnie exclaimed is “homemade” and “excellent!” Flo noted that it consists of “finely shredded” purple and green cabbage, and added that it’s the “perfect complement to any sandwich.” 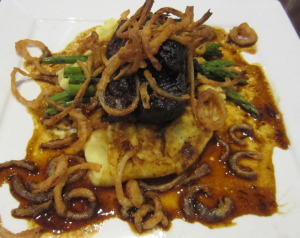 For heartier appetites (like mine!,) redwhite+bluezz also has a few of the most popular dinner items on the lunch menu. I had ribs on my mind that day, (because I had cracked mine a few nights before,) so I opted for…the Shorts Ribs!  I love this dish! The meat itself is super tasty, and since it comes on a bed of mashed potatoes with charred asparagus, it doesn’t need anything else with it. (But don’t forget to order fries to dip in the red wine demi-glace. I’m actually licking my lips while I’m writing this!!!)

Flo also tried the Fettuccine Alle Carbonara, and chose grilled shrimp to add onto it. She labeled the “tasty” pasta a “rich dish.” 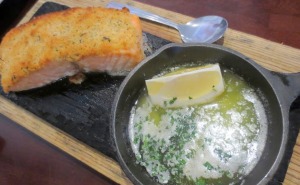 The generous piece of salmon. Photo by Flo Selfman.

I have to be honest and tell you that, although we ordered the Cedar Planked Salmon, for Flo and Bonnie to try, I wound-up taking it home to Mr. X when they both got too full for it. And he’s my salmon expert anyway, so it worked out great. He lauded the fact that the piece itself was “very thick and fresh.” I usually hate it when any of my junior reviewers tell me a dish is “fresh,” because it should all be, but he explained that many other eateries serve seafood that tastes much less than that. (Eww.) So, he was very happy with not only the quantity but the quality of the fish, as well. He told me the taste was “enhanced” by the chive butter that accompanies it. It’s the best-selling menu item at redwhite+bluezz, so we chose well. Christopher told us it’s the favorite of their entire staff!

We may have all been too full for the salmon, but certainly not for the desserts! The other three totally enjoyed the various sorbets and espresso ice cream with bourbon whipped cream, (which the restaurant is known for–they whip it up fresh there daily.)  [Note: I hate the tastes of coffee and alcohol, so I didn’t try them.] They went nuts for the warm Apple Crisp, which was served in a bowl, with a scoop of vanilla ice cream on top.  Bonnie, another Texas woman, said, “The combo of apples, a hint of caramel, and bourbon, makes you feel like down home.”  You can’t get a better review than that! 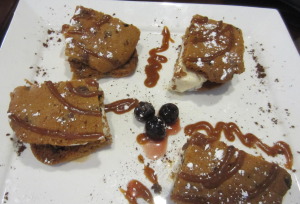 But the absolute winner, to all four of us, was the homemade Ice Cream Sandwich.  The chocolate chip cookies on the outside were the best!  I could have eaten just one (or ten!,) of those!!!

My coffee freaks out there—take note of this: As I just said, I don’t drink coffee, but they all do.  And did that day, giving it the most glowing reviews ever! I’ve never heard people carry on about that beverage like they did!!! Nikki said it’s “delicious, robust, and full-flavored.” (Hmm, that’s the same review Mr. X always gives me!) Bonnie said, “It’s so pure, you would ruin it if you added cream.” Flo agreed, saying that, for a rare time, she didn’t need cream with her decaf, which she deemed “amazing!” And, we all loved the interesting white cups the coffee came in. 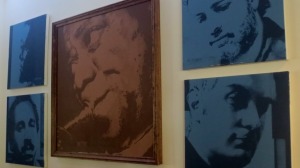 Some of the beautiful pictures in the hallway. Photo by Flo Selfman.

We had such a good time at redwhite+bluezz that we stayed almost till it was time for dinner! We couldn’t have eaten another bite, but we could have enjoyed the live jazz the place is known for.  (Flo really admired all the classic music pictures on the walls of the hallways.)

We all recommend this place, whether you’re already in or near Pasadena, or just want to have a good meal in a different environ than usual. And if you’re a tenant in that new pretty building right across the street, I suggest you just make it your commissary! You won’t go wrong.