Trending
You are at:Home»DINING»DINING: PAPER OR PLASTIK
By Karen Salkin on July 16, 2013 · DINING

This is the shortest of restaurant reviews, but it comes with a weird side story, too.

My friend, Lila, likes the breakfast items at mid-city’s three-year-old cafe, Paper or Plastik, (although I still don’t see the reasoning behind the moniker, nor know if there’s any significance to the end “c” being a “k,”) so I met her there for a recent week-day brunch. It was just okay; it’s a not-too-clean-looking basic faux-hipster hang-out. There’s food you order at the counter, some cookbooks and soaps for sale, and a ballet studio in the back. (Strange combo, but whatever.) The menu was okay, the service was a bit lacking but to be expected at counter-order places like this, and the food was good enough. 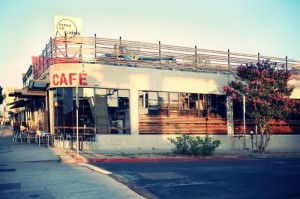 But here are the negatives: First, it was a tad pricey for the portions and atmosphere. We had a mini sandwich, an order of breakfast potatoes, (which could not hold a candle to the ones at Santa Monica’s Back on the Beach and Back on Broadway!,) an order of e-words, and a slice of banana bread, with no drinks, and it came out to almost $30!!! And you know the portions are small when I have no leftovers! (I ate at a similarly-priced order-at-the-counter place in the Marina the day before, but it was clean and bright, with excellent service, and gorgeous, good-sized portioned food! A far cry from this place.)

But worse than the prices, portion sizes, and shabbiness combined—they have no ketchup!!! At all!!! In any form! And…they serve breakfast potatoes! Who ever heard of such a thing??? They could have been nice and warned me when I ordered them! It’s just pretentious to not have ketchup on hand in a place that serves breakfast. Many people I know would like them with their e-words, too. Even Mr. X eats his that way.

Another negative is that it took about twenty minutes for them to bring me my basic ketchup-less potatoes and tiny, skinny sandwich. Lila was already done with her meal, which negates the “together” part of going out to eat together! We had to ask for it before anyone even checked. When the server finally did, she found-out that my order had been sitting out for quite some time without being served to me, so they had to make it all again! If they had just been honest at that time, I would have been happy to pass on the whole shebang, which is exactly why no one said anything to me to begin with!

So, those are my basic complaints, which are enough to keep me from going back there. Nothing really major, but too many in their totality. 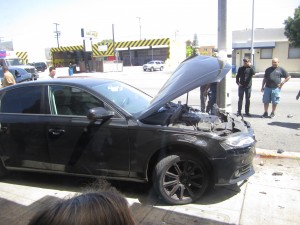 But here’s the weird story, which is no reflection on the cafe: I had just walked in ninety seconds before, greeted Lila, turned towards the menu board, and then we heard, and felt, a major crashing noise, like an explosion or something. I saw people running from their tables, some even leaping up the stairs. We were all freaked-out, and looked-out the giant length-of-the-edifice windows to see a car crashed into the pole right in front! And all the tables and chairs on the sidewalk eating area were askew, as were the customers. There were broken flower pots and dishes and dirt all over. Thank God no one was majorly injured, but one woman did have a gash near her elbow that was dripping blood all over. She was so good about it, though, so props to her.

It turned-out that a car was crossing Pico, even though another vehicle was coming up fast from Fairfax. They collided, with the straight-on one winding-up on the sidewalk in front, crashed into the pole.

Here’s a reason to be grateful always: if I had been entering the eatery just ninety seconds later, I would have been killed! It was a prime eating time, so it’s a shock that no one was in the doorway at that exact second.

We watched the triage unfold as we ate, and I talked to four adorable cops after. (Not even to get the scoop although they gave it to me anyway—just because they were cute and said hi!) 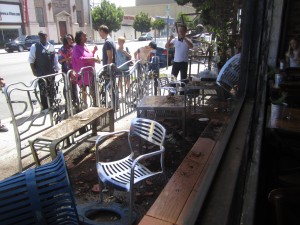 But here’s something I thought of during the aftermath: every single person on the scene was shaken-up. Many, including Lila, thought it was a bomb. We were shaking and nervous for the duration of our meal. And the people who were eating outside, or right by the window, were a mess. The owners are going to make the financial damages back from the insurance of the responsible driver. So, I really feel that they should have done something for the customers who were affected. I don’t drink coffee, but even a simple gesture like sending someone out with a pot of coffee would have shown some consideration for their customers. Or juice. Or something to soothe everyone’s nerves. Maybe even a voucher for something free next time. That would be a good PR move because I doubt if anyone will be back voluntarily after suffering such a trauma. At least that would bring those customers back in and give them a better memory of the place. The fact that they didn’t think of that amazes me. Not smart business folks.

But, this review isn’t just to complain—it’s to teach. So, what did we learn from this little debacle? Never eat outside if it’s near the street, (as opposed to a back garden or the like.) (I never choose to eat near the street anyway, not just for safety, but because I hate the vehicle fumes.) So, let this story be a lesson to all us hip Angelenos! And perhaps to other cafe owners, of how to do business right.

[No info here because I’m not recommending it at all.]