Trending
You are at:Home»DINING»DINING: LEMONADE
By Karen Salkin on March 16, 2012 · DINING

A friend took me to the Lemonade branch in Beverly Hills for lunch the other day. She loves the place, but for me, what a disappointment! Yes, it’s considered somewhat hip to go through the line and pick-out your own food from the visuals. And yes, it’s nice that they let you try the salads and soups before you commit. And yes, it’s pleasant to sit out on the deck on a nice day.

But each dish I tried was more awful than the last! The bad food was my main issue with the place, but really, isn’t that what matters most in a restaurant??? 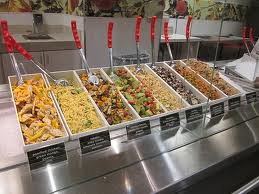 So, you walk in and see all these colorful salads. Actually, looking back, not one of them appealed to me! Gelson’s has more interesting salads, and I’m not even very fond of those. At my friend’s insistence, I did try a couple, but none were to my liking. And, they were all full of lemon, which I don’t like at all. (By the way, I don’t hate the flavor as much as I used to, if there’s just a drop in a recipe, as opposed to coffee, which ruins everything for me just smelling it!)

They had sandwiches and three “main dishes, ” too, so I thought I was in luck. The counter guy talked me into a “Holiday Sandwich,” which he said they call “Christmas in a Pot.” I’ve had a few versions of sandwiches like these recently, and liked them all, so I just went with it here at Lemonade, too.

Well, let me tell you, it was disgusting! First of all, it was all dark meat, a fact he neglected to let me in on. I’ve never been to a Thanksgiving or Xmas dinner that serves just dark meat! Worse than that, it was all stringy, and since we were sitting out in the light, which illuminated everything so clearly, I noticed that through the turkey were all those rubbery strings that are ligaments or something! I couldn’t even choke it down. And I was starving.

And all the sandwich came with is what the guy called a salad of “mixed greens,” but in actuality was just dandelion greens. It’s what we kids used to pick from my backyard to play “house” with when we were little. And worse, to me, is that they didn’t even ask what dressing I’d like, and just threw on some lemon stuff. Not fun. I went back to ask if they had another dressing, and they did. So why didn’t they ask me my preference to begin with??? (It was raspberry vinaigrette, by the way, and, though good enough, burned my tongue.)

My pal thought I should try some other dishes from there, so we took two home. As a mac and cheese aficionado, I must tell you that it was pretty awful. It was too thick and had no flavor whatsoever! And the buttermilk chicken almost made me puke. I looked down to see why it was so bad, and it was all pink inside, like it had barely been cooked! And this is after they said it was fit to eat on the spot, AND I had heated it in the microwave! Gross. I had to throw-out both dishes, something I am absolutely against doing. I’ll force down almost anything just to not waste food. (Or, more accurately, pass it over to Mr. X, and make like it’s delicious and he must try it.) 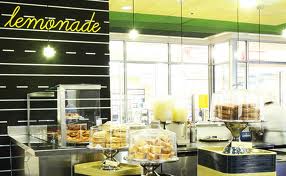 As if the food wasn’t bad enough, their signage was the worst I’ve ever seen; it’s the most confusing writing of a menu ever. Even I, with my 147IQ, was totally confused. And, after trying the food, I don’t have to learn how to use it, if you get my drift.

And, for some strange reason, they had a turkey sandwich listed under pot roast. The know-it-all counter guy snidely told me that turkey pot roast is a usual thing. But, by definition, “Pot roast is a braised beef dish.” Which can be read as: “not turkey!!!”

When we were leaving, I asked the guy at the check-out for a box for the sandwich, (trying not to let me friend know I had to throw it out,) and a bag to carry said box in. He told me I had to go over to the food counter for them. I never push ahead of people so I had to stand there waiting for my turn to ask for the carriers. The girl gave me a box, but said I had to ask the check-out guy for the bag! So, I had to wait over at his station all over again!!! Why didn’t he just give me the bag in the first place??? What a jerk!!!

My last complaint about Lemonade is that, while we were sitting at a table on the deck, the sprinkler went on!!! It drenched a couple of tables and a few patrons, including my friend. Why would they have it set-up like that??? What an odd choice for a business to soak their customers. In this case, in every way.

No info because it’s not worth your eating at!