Trending
You are at:Home»Uncategorized»DINING: LA SANDIA
By Karen Salkin on October 28, 2011 · Uncategorized

Many of you ask me why I never promo Dine LA, a once-or-twice-a-year program where you can try three courses at many local eateries for less than usual. The answer is because I never know beforehand!!! Their PR people, if they even have any, are a bit lax, it appears.

So between my late knowledge of this season’s program, and my busy schedule those two weeks, I got to visit only a couple. Surprised I participate? Even restaurant critics enjoy a deal every now and then. 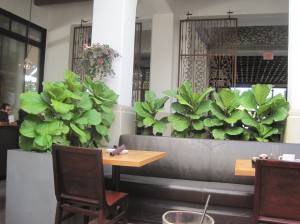 So, I roped Mr. X into going with me. I chose La Sandia in the new Santa Monica Place because the special menu had foods we both eat, and neither of us had been to the mall yet, even though it debuted probably over a year ago. I didn’t even know it was outside!!! How stupid of the planners! It’s like it’s for tourists only. I guess they don’t care if rainy days bring no customers. Didn’t they know that Westside Pavilion Two was (and continues to be) a big bust!? And that shoppers shun Century City in the winter?

Anyway, back to the restaurant. I always go by the fish dish for Mr. X, and the desserts for me. This was the only place on the list with only one choice in the latter category, but since it was flourless chocolate cake, which I love, I was fine with it.

We wound-up going on the afternoon before the Yom Kippur fast began, and, because this year I wasn’t having an early pre-fast dinner with pals, this was going to be my only food for the next twenty-five hours, so it was important to me to make it count for taste, nourishment, and satisfaction. Remember those desires for later, but I’m going to go in order because it was a bit of a yin and yang experience.

When Mr. X told me on the way that the mall is mostly outside, I retorted, with certainty, “But the restaurants aren’t!” I guess there’s a first time for everything because I was finally wrong; La Sandia is basically outdoors!!! We were fine, though, because it it was a gorgeous day. But there was a strange breeze coming onto my left side the whole time, which really wasn’t comfortable. (We had to stay put because Mr. X is not a fan of changing tables. We had already switched as soon as we sat down because the first seat was so low that my face was on the tabletop!) 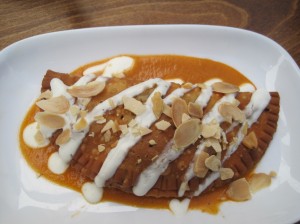 The empanada appetizer. And trust me, because of the colors (not to mention the excellent photography,) all the food looks better than it really is.

So let’s cut to the food. The chips and salsa were okay; the latter was just a little too barbecue or smokey tasting for us to really like it. (We couldn’t identify the taste, which made it even a tad stranger.) My appetizer, a sole beef and chorizo empanada, was delicious, but Mr. X’s quesadilla platter was downright weird, although it was very generous, especially compared to my tiny morsel. His consisted of five quesadillas, each with a different mole. (That’s Mexican sauce, for those of you who are not up on this type of food.) But they were smothered in them, which was not pleasant. And we both liked only one of the five: perhaps we’re just not mole people. 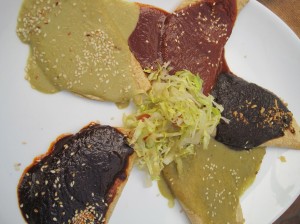 The quesadillas, if you can even find them under all that mole! Ugh.

Another problem with the moles is that no one explained them to us. The waitress didn’t appear again for quite awhile, so we had to ask the bus boy which was which. Not only was he not sure, but, while he was trying to figure it all out, he kept touching the plate! And not the edges either. Ugh. Mr. X, being the food animal that he is, though, just kept shoving the quesadillas down, to just get it over with. 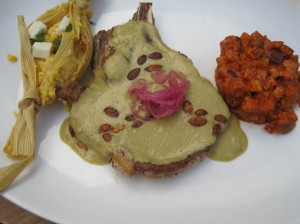 They smothered the pork chop, as well, to hide all the fat!

Then came the entrees. Mine was good enough, but the pork chop was almost paper thin, and over half of it was fat! Ugh again. It was accompanied by pizza-flavored (for lack of a better description) chopped potatoes, and delicious corn pudding, so the sides were okay. 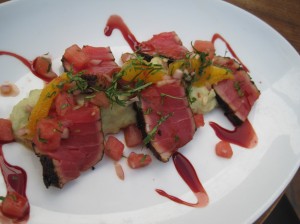 The "grilled" tuna. Not exactly what we were expecting with that title.

But Mr. X got slices of the rarest grilled tuna I’ve ever seen in all my years as a restaurant critic! Again, we’re far from ahi connoisseurs, and he said it was surprisingly okay, but that’s not exactly a ringing endorsement.

The waitress kept asking if it was time for her to “put in” the dessert, so I thought that meant that not only was it a flourless chocolate cake, but perhaps a molten one! Where else would she “put it in,” except an oven?! (I know, I know—I realized many days later, when I kept fixating on the incident, that she may have meant “put in the order,” but I swear, that’s not how she delivered the line at all.)

So, we were finally ready for it, with bated breath. (In reality, Mr. X was ready for it five minutes after he began the whole meal, while I’m the opposite and would have been really ready by the time of the fast, incredibly slow eater that I am.) As I was debating ordering milk to go with the chocolate, here comes the busboy delivering each of us some beige-colored square thing. My shocked face said it all. (Mr. X actually took a picture of, as he put it, of my disappointment. It was a sad sight.)

I told the guy that I didn’t believe that was chocolate cake, and he said, “Oh no—we ran out of it. But this is tres leches cake. It’s good.” I didn’t care what he, or anyone, thought of the goodness of this snack—I didn’t want it. I wanted chocolate. So, much to Mr. X’s horror, because he would eat wood if it would get him out of there and home quicker, I asked the waitress to bring us the dessert we ordered. And were paying for!

So, she talked to the management and then fast-talked us, saying that she was mistaken, and they were making new chocolate cake. The, she showed up with plates of a fancy-looking concoction, but she didn’t realize with whom she was dealing. They were chopped-up brownies with cinnamon ice cream, strawberries, and chocolate syrup!!! Did she think I was an idiot??? I told her nicely that this was a brownie and ice cream and I wasn’t interested in it. Mr. X kept his, and ate it, disliking it the whole time. I took one bite of the ice cream and cringed. The whole mess was pretty bad. And chintzy, to boot.

To her credit, they took the dessert off the bill, (which, of course, they had to anyway,) without me asking. But the big question is: how does a restaurant have only one dessert on the special menu, that I’d guess half of the lunchtime crowd was ordering, (if they even know about the poorly-promoted promotion,) and then not have enough of them??? I can see if there are the usual three choices and they run out of one, but running out of the only one is just crazy!

I know I said this review is yin and yang, but it’s mostly just the bad one. (I know there’s no “bad one” in the concept of yin and yang, but I’m sure you all know what I mean.) The only positive was the corn mush in the husk on the side of my pork chop. Oh, there is one more positive—now we have another restaurant to never eat at again.