This simply named Westside eatery had often caught my attention, on paper. But driving by, it looked not special, so I never chose to go there.

But on a recent super-hot day, when the non-air-conditioned Apple Pan was too steamy to have lunch in, a friend and I chose to try the near-by Food. 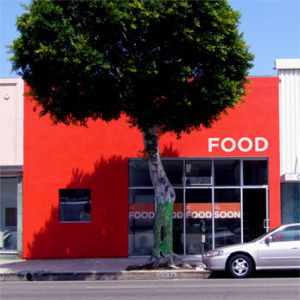 This is the deal: You order at the counter and then sit in one of the most uncomfortable seats I’ve ever been in. The tables and chairs, or benches along the wall, were all way too hot, (and also very stiff-looking,) so the owner told us to sit at the counter, under the one vent that cooled that area. My back was miserable in those seats. This experience was so not worth the discomfort.

And the whole place looked kind-of dirty, too. It even had an “outside” floor. I felt like I was in a garage! Very unappetizing. But we were hungry, so oh well.

The menu had some interesting-looking salads and sandwiches, but when I saw that they had rotisserie chicken, that was it for me.

But, let me tell you, this chicken, that was three times the price of the delicious ones that we all love from Costco, was basically dry. I kept feeling like I was going to choke on it. And the skin was far from crispy. And it barely had any taste. I had to do something I never thought I would—I had to drag the chicken through the bottom grease just to get some flavor to it.

It came with chunks of roasted potatoes, but they, too, lacked flavor, and were pretty much swimming in grease, as well.

Judy ordered a simple chopped Cobb salad, and specifically asked them to leave-out the bacon pieces. I asked them to please just put them on the side because I love bacon.

So, the salad came, with the extra little monkey dish of the chopped bacon. Judy took one look at it, and saw what looked like bacon pieces in her salad, already covered in dressing. So, she asked me to try them, just in case. What role reversal that was! I’m always the one with Royal Tasters because I’m such a picky eater. But I was so confident that they were bacon that I tried a couple for her. And yes, they were indeed bacon, which she hates.

How much would it have cost them to just make her another salad??? They were acting like there was gold in there! Seriously, this went on for several minutes. They said that maybe a few pieces of the chopped bacon had fallen onto the salad plate, but that there shouldn’t be any more in there. The ones I tried were covered in dressing, so, there’s no way they just fell onto the top of the plate. And even if they did, the customer requested no bacon!!! Period. That should have been the end of the discussion.

Either way, what if the customer was allergic to bacon? Or was kosher? Or had some other dietary reason to ask for it to not be in their salad? How does an owner stand there foisting the salad on her? That was unbelievable to me. Just make her a new salad, for goodness sake!

The one good thing was the side Caesar salad that came with my chicken. That was really good. But definitely not worth it for the hassle of the other salad, nor for the not-very-good chicken and potatoes. Nor the bad seats, nor the warm temp.

And God forbid they would give us a couple of pieces of bread, or crackers, or the sort, especially since we didn’t order just sandwiches, which come with their own bread, of course. Since they make sandwiches, we know they have wheat products on hand!

So, there you have it! The yin-and-yang of Food on Pico. Trust me—there’s a lot better food on that street!