After a few years of being fixtures in the New York restaurant scene (with three locations in Manhattan and a recently-opened one in Westchester,) Fig & Olive has finally moved west. And not just move–arrive on tony Melrose Place! They took a page out of my party book and held a three-night opening party. (They beat me, though–I’ve had my birthday party on only two nights. But once, I had four parties, complete with different caterers and outfits, on one day–in my house! Don’t ask.) 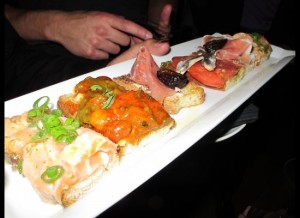 Some guests I spoke with said they were there for all three, but, in one of my busiest weeks all year, I attended only one. I can’t remember if it was Spanish, Italian, or French night because I had appetite for only their signature crostinis, which were passed on all three. With my weirdo tastes, many had ingredients I don’t eat, (like olives, truffle oil, and artichokes,) but I absolutely loved the crushed tomato ones! I wish I had some right now. They were out of this world. My classy friend loved them all, especially one with mushrooms and artichokes. And truffle oil. 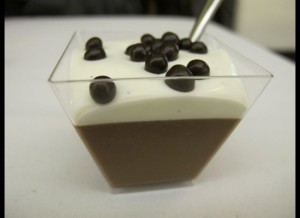 They passed some other taste treats, too, but, as the guest list was quite interesting on the middle soiree, (including a lovely fan of my show who gave me some fabulous tips for my in-the-works restaurant book,) I couldn’t stop mingling long enough to try anything else. Until dessert, that is. Thank goodness I had another engagement to get to after or I’d still be there scarfing those super-delicious creamy chocolate pot de crèmes! OMG! 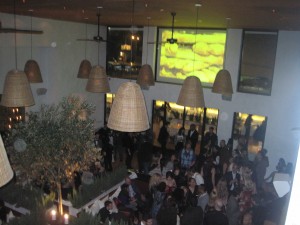 The cocktail selections were quite entertaining, as well, and all but one server were fabulous and eager-to-please, which I would have thought to be hard with such a big crowd. We really appreciated just how conscientious they were, which is what I look for most in an eatery. (Well, that, and cute waiters.) 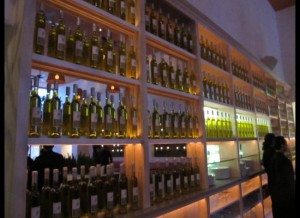 The place itself is gorgeous, with many different areas–bars, lounges, main dining room. I hadn’t realized till we were leaving that the huge wall near the front was made-up of bottles of olive oil! I believe they’re all for sale, too, which means that this may be the one restaurant Mr. X comes with me to. He’s all for using olive oil on everything, especially since sticking to a Mediterranean diet is considered the most healthful thing one can do for oneself. It’s the basis for the Fig & Olive menu. 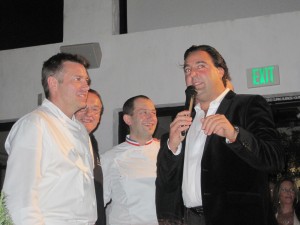 Midway through the fete, a group of men who I can only assume were the owner, chefs and a dignitary, valiantly tried to welcome us and impart some knowledge. As usual, I stopped mid-bite and tried my best to decipher what they were saying, over the din. Also, as usual at event of this magnitude, the assemblage just continued what they were doing and didn’t give a fig (pardon the pun) for giving their hosts even polite attention.

I kept wishing that Arnold Schwarzenegger was at the mike–back in the day, when he and Maria first told me they were fans of my show, he invited me to the most star-studded event I’ve ever seen to this day, outside of awards shows. He was trying to give a “welcome” speech and no one, (except me again,) was giving him their attention. All of a sudden, he admonished the crowd sternly, in his thick Austrian accent, “You are being very rude, and I don’t appreciate it.” They all stopped in their tracks! A small shiver ran down my spine. Clint Eastwood was standing right next to me, and even he looked frightened. The men of Fig & Olive needed Arnold that evening. At least I got to enjoy them; their pride brought a smile to my face.

I love an establishment that does its opening correctly. I have a feeling, with their east coast reputation, Fig & Olive will continue to serve us well for many years to come. I’ll try to do a real review for you sometime down the road. And I’ll bring my healthiest eaters with me!