Trending
You are at:Home»DINING»DINING: BIERBEISL
By Karen Salkin on April 11, 2013 · DINING

My friend Judy and I ate at the newish Austrian eatery BierBeisl, in Bevery Hills, for my January 14 birthday, and were far from impressed. So much so (or not so,) that it didn’t even merit a review from me! It was just plain blah. 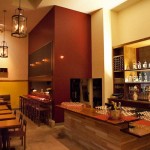 But now it keeps popping up on lists of “best” in the restaurant world, and I have to weigh-in. Its success has me harking back to something that happened at the Restaurant Critics Association dinner many years ago.

I had passed on invitations to join that organization many a time. It just wasn’t my cup of tea, even though I enjoyed several of the members with whom I was acquainted. But, a guy who wanted to write a restaurant book with me asked me to join him for their classy annual dinner, so I did.

It was at a prominent L.A. Hotel, and we were seated at a round table with eight others. When I saw the pretentious menu, I almost barfed! It consisted of sweetbreads, wild boar, and other such dishes, and I had two immediate thoughts: one that it was a joke, and the other was that, if this was indeed what we were to be served, I had to get the hell out of there!

I realized it was the real deal when the other eight began oohing and ahhing over it, saying how wonderful and creative and they couldn’t wait to try it all. When the waiter came to get our choices, I quietly told him I couldn’t eat any of it, and asked if I could have just chicken instead. He totally understood, and said of course I can. My date copied me. When he moved on to the next, she asked if she could have the chicken, as well, mumbling something to the effect that she always has wild boar, so she wanted a change. (I think I actually saw her nose grow a little.) And so it went around the table. They all eschewed the “special” menu and joined me in sanity. But no one wanted to be the first to say it because they each desired to appear as “culinarily enlightened” as the rest.

I think that’s what’s happened with BierBeisl; no one wants to say how overrated it is because they’ll look like they don’t know restaurants. But the only thing I’m afraid of is making flight reservations, so I’m don’t mind being the first to tell the truth about this place.

The food is good enough, which I’ll expound on in a second. But the place is totally uncomfortable, the service is not very good, and the prices are astounding. This is what we had between the two of us: two veal schnitzels with french fries, one salad, and one coke. Period. Guess what the bill was. Ready? $88!!! Before the tip! Could you imagine if we drank? Or had desserts? Puh-leaze. As Johnny Carson once said to me over the description of a restaurant, give me a break here!

And the place is sooooo uncomfortable, and not just in the choice of chairs. It was a creepy little Beverly Hills side-street cafe in its previous incarnation, so the tables are in two or three small rows. The first few tables are directly in the line of the door, and the diners at those locations are subject to the weather with each opening and closing. Such a vexatious situation.

Then the, shall we say intellectually-challenged?, waitress, who was pleasant enough, didn’t seem to know anything outside of her recited-exactly spiel. Judy, whose heritage is German, (and therefore, she’s really familiar with close-by Austria’s cuisine,) and whose family was big caterers here in Los Angeles, (one of my first jobs in town, by the way,) almost got into an argument with our decidedly non-European waitress about the fare! (Not quite, but the girl just wouldn’t accept what we were saying.) 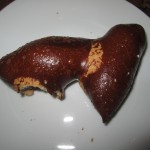 They did have one sort-of interesting food item; the girl told us it was “fingerling potato salad on German bread,” which was really a big pretzel. It tasted weird, but as I kept munching on it, I realized what I was doing, and asked Judy, “Why am I putting potato salad on a pretzel because they told us to?” She made a face and said, “I wouldn’t even eat that with your mouth!” Not exactly a ringing endorsement. And as I told you, her family is from that region! And foodies, to boot!

Another annoyance is that they put out the word that they have a “communal” table, like the iconic Duke’s did, back in the day. Loquacious Judy loves that kind of thing, especially one in Beverly Hills, so that’s actually why I chose this place for my birthday dinner–so that Judy could have a social time, despite it being just the two of us, who talk to each other all the time. I even inquired about it when I made the reservations, yet, when we arrived, we were seated by the door, at a table for two.

Looking around at the cramped digs, we didn’t see anything close to a table for a group. When we asked, the dour hostess pointed to the last table against the wall, which was for eight. It turns out that, when desperate, they seat not-together parties there. Oysh.

When two of them left, they finally moved us there to let us get away from the door. We were now seated with two couples who were friends, and were clearly annoyed by our presence at their table. Have I mentioned the uncomfortable factor yet???

They had few desserts, and I really needed one, for my birthday. The waitress told us several times about their main one, even though each time, we reminded her that I was seeking chocolate, which this clearly wasn’t. I noticed a man I semi-knew near-by, who had just finished dessert, and asked what he thought. He told me to go elsewhere if I wanted something good in that category.

So, we did! We wound-up at the just-opened Beverly Hills branch of Monsieur Marcel, and were extremely happy. (Maybe I’ll even do a review of them down the line.)

So, to wrap-up BierBeisl, Judy said the schnitzel was excellent, and that’s her area of expertise. To me, it was just a really thin, nothing special serving, one which you can probably get in the service deli of several supermarkets. Or public school cafeterias! The salad was pretty good, but not worth $19., especially with the pitiful ambiance. There was no fun to be had there at all, in any category.

So, despite what you might read elsewhere, you’re not missing anything if you don’t want to ante-up a month’s rent for the privilege of dining here. The End.