Trending
You are at:Home»DINING»DINING: BACK ON THE BEACH CAFE
By Karen Salkin on June 13, 2013 · DINING

BACK ON THE BEACH CAFE

At a recent holiday barbecue, when some guests asked me what my favorite restaurant in Los Angeles is, without hesitation, I replied, “Back on the Beach!”

They then said that they don’t think I ever officially reviewed it in this e-zine, which I absolutely could not believe. (I’ve made mention of it a few times, though.) Fans of my show used to think I was part owner because I talked about it so much! And I definitely reviewed it during my gigs at Beverly Hills People, the Culver City News, and the Bay City News. But what an oversight to never have done it right here!

So, I realized it was time for a couple of almost-summer visits there, especially to review their new dinner menu. But there’s so much to say about this place that I hardly know where to begin!

The big news at Back on the Beach Cafe is that they now serve beer and wine, including at the tables outside! And an entire drink menu is forthcoming, which will include sake cocktails. 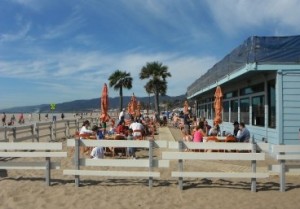 Side view of the outdoor dining area.

For the summer, they’re open from eight in the morning to eight at night daily, serving all three meals. I basically love everything there, but breakfast is the star.

I’ll tell you about the heavenly fare in a minute, but first I have to describe the scene. The cafe is indoor-outdoor, so you can sit at umbrella-ed tables right in the sand, or inside, looking out at the beach from there. There’s also a great room for private parties. I witnessed one for a twelve-year-old recently, and wondered why the kids weren’t making a lot of noise. Turns out, they were making use of the playground right outside the side door! They were close-by, but didn’t disturb us dinner patrons even one little bit!

The café is adjacent to the famous Annenberg Beach House, so after you eat, you can always go to that venue, and either explore or use the beautiful pool. (Check on admission prices and rules first.) Or you can rent beach equipment right from Back on the Beach for the day. They also have a magazine stand, in case you forgot to bring your own beach reading materials. The clever ideas there just go on and on. (Check the “Rentals” section on their website for all the deets. You’ll be amazed!)

The week-end brunch scene is where it’s at. Diners are willing to wait a long time to get seated, but they never seem to mind because waiting is actually part of the fun experience.

People like me, (who crave the food, love a morning beach situation, never have time to wait anyplace, and have week-day mornings free,) can choose to go there Monday-Friday. It’s the same great food and atmosphere, but a little less hectic.

One such visit for me was just the other day, when I wanted to give out-of-town visitors, Thomas and Anita, a royal send-off. They opted to sit on the beach, and we got a table that was in both the shade and sun, to accommodate all of our likes.

Along with what Anita deemed “lovely views in all directions,” (even when she was looking just at me!,) we appreciated the warm and accommodating service we received from Angel, a long-time server there. I swear, I’ve never seen that man in a bad mood! (Even when he’s had to work with an occasional tough customer who’s joined me.)

Finally to the food! Breakfast is up first, then lunch and dinner in the next few paragraphs.

We started with mimosas, which were served in the perfect plastic glasses; each had an indentation for the thumb! Smart tumblers and even better mimosas!!!

We also ordered the regular fresh-squeezed OJ, that was not only tasty, but contained the most generous, not-expensive portion of the juice that any of us had ever seen! (When people in their ’20s comment on that, you know it’s impressive!) Anita loved her cappuccino, as well.

Everything we ate was delicious. And equally as generous in portion-size as the OJ. We began by sharing a fresh fruit plate. Since we couldn’t finish even one dish, (and I agree with the Pope about not wasting food, though I still don’t see how it would be “stealing from the poor,”) I took the rest of the fruit home to Mr. X, who eats fruit every day. He said it was the freshest he’s ever tasted!!! 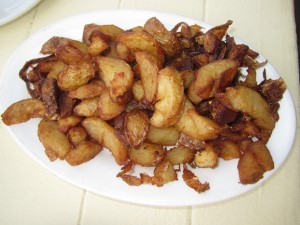 The most delicious potatoes in the world! YUM! Photo by Karen Salkin.

I ordered the sides of bacon and potatoes as my meal, which is the supreme breakfast to me, and let me tell you, they were the best I’ve ever had! I’m still dreaming of them! As Anita said, the bacon was cooked perfectly—no fat, like we see everywhere else! It was the perfect crispness, without my having to tell them how to do it.

I ordered the potatoes well-done, but they may come like that to begin with. I even ate them without ketchup, that’s how scrumptious they were!

Anita’s scrambled e-words were really good, too, and she loved that they came with a mini scone! It added a touch of elegance to a basic dish.

Thomas said his “delicious” huevos rancheros, that come with black beans and rice, were “better than the best” he’s ever eaten!

I created an interesting concept here, which you can use, too: dessert with breakfast!!! Since I hate e-words, and usual pancakes, etc. are boring to me, I lean towards ordering something with chocolate when I go out for a morning meal. At Back on the Beach, the bacon and potatoes were so attractive that I just had to go with them. But I was still craving a specialty item I noticed on the menu: bananutella french toast! I knew I must have it also, but when it came to the table, it was so gigantic that I had to share it with my pals…as dessert! It was a stroke of brilliance, if I do say so myself. 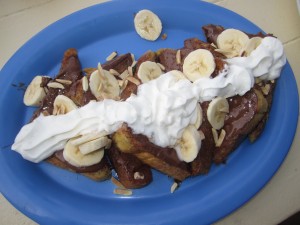 The French toast had six pieces, rather than the usual four, and was topped by the perfect combination of nutella, fresh banana slices, and slivered almonds. The bread itself had a little extra flavor to it, and it was downright heavenly. And, again, generous–even with three of us working on it, I took half of it home.

Something I’m amazed at is that I never ate again that day, except to finish my bacon and potatoes, and have one more portion of the nutella toast. I guess that proves that breakfast really is the most important meal of the day! At least on Back on the Beach.

The lunch menu features salads, sandwiches, and a few entrees. The nine-item kids menu is full of classic choices, including the kosher hot dog that I would have begged for if I had seen it in advance. (As I mention at every restaurant, I am my mother’s kid, so I’m entitled to use the kids menu.)

I always gravitate towards two salads that are unique to Back on the Beach. The Marion Davies, (named after the actress girlfriend of William Randolph Hearst, owner of the original property here) is a lovely combination featuring cranberries, caramelized walnuts, and blue cheese. Everyone’s favorite is the signature Fred’s Salad, created by the owner, Fred Deni. It almost defies description, but includes chicken salad and potatoes in a caesar-esque dressing, that’s a bit lemon-y. How’s this for an endorsement?: I’m far from a lemon lover, but I can’t stop eating it! You just have to trust me on this one and try it for yourself to understand the attraction.

One of the few reasons I’m happy that summer’s here is that now Back on the Beach serves dinner. Yay! What a lovely way to enjoy the sunset on the beach! Mr. X and I went there last week to see what Executive Chef Felipe Mares was cooking up.

We lucked-out with the night we were there because they had made some of their catering appetizers, (whose names I don’t remember,) and shared with us! OMG, were they terrific!

Perhaps a little too terrific, because we were too stuffed after scarfing them to try-out many other dishes. But we were ultra-pleased with the ones we chose.

We shared a perfect summer salad, the grilled stone fruit one, that featured summer peaches that night. The other ingredients are arugala and my favorite substance of all time, burrata cheese!!! Yum-my!

My grilled skirt steak was well-seasoned, but the potatoes au gratin and charred broccolini that accompanied it were even better!!! And I’ve never liked that vegetable anywhere else!!! 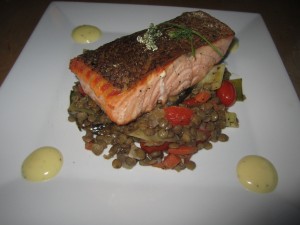 Mr. X could not have been happier with his pan-seared salmon, with leeks, lentils, roasted tomatoes, and a lemon aioli. He said the portion was “huge,” and the salmon itself was “fresh, succulent, melt-in-your-mouth.” He’s still raving about it days later, and wishes we lived closer to the beach so he could have it all the time. Would that be a crazy reason to move? Perhaps not. (Note: if you’re not a fan of fish skin, ask them to remove it before cooking.) 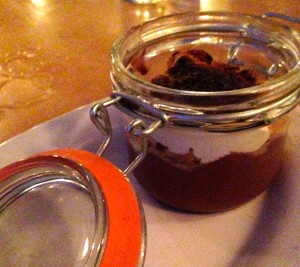 As we know by now, dessert is my favorite part of any meal, (as witnessed by my breakfast dessert invention above,) and we were thrilled with these. Though there are only three of them, it was quite enough. We eschewed the summer berry cobbler for the giant cinnamon roll bread pudding and the “smore preserve,” and absolutely loved both! The smore concoction of chocolate pudding, house-made graham crackers, and marshmallow brûlée comes in a cute jar, so it’s visually fabulous, as well.

One last note: I’ve long used their catering for my many soirees, both on-site and off, and I highly recommend them for that, too. I don’t delude myself thinking that my guests show up for me; it’s one hundred percent for Back on the Beach’s food! In addition to the delicious fare, owners Fred Deni and Jim Crystal know how to make each fete look just right for the occasion.

Okay, I have to go plan another party there right now! Although, any meal at Back on the Beach is already a party unto itself!