This is a fun story of how a potentially bad evening turned excellent. And became a discovery of a wonderful eatery, 94th Aero Squadron Restaurant, that has been in existence for over four decades, but neither my friend, Alice, nor I had ever even heard of it before! (Alice told me later that it kept reminding her of “somewhere familiar,” and it “made her feel at home,” but she didn’t know why. That all cleared-up when we found-out that it’s part of the Specialty Restaurant Corporation, who also own the very famous Castaway in Burbank, which, of course, we’ve both been to before. Haven’t all Angelenos?!)

The excellent adventure was all thanks to the calm restaurant personnel, who knew just how to deal with a difficult situation with grace. I wish everyone in that industry would learn from them. 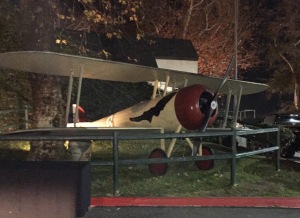 We noticed this interesting artifact outside on the grounds when we finally exited. Photo by Karen Salkin.

Alice (whose comments are the ones in quotes from here on out,) and I were actually at the 94th Aero Squadron Restaurant at the Van Nuys Airport for an interesting airline party. But, because too many entities had gotten involved with the invitations, it was overrun with a plethora of guests. And they were all in gowns! I’m not great with crowds to begin with, and we were hungry. We were supposed to be at a private dinner party that was part of the evening, but that room was already packed, too, (we were not late—just everyone else came really early, apparently,) so we were about to just leave, very disappointed in the outcome of the evening. But the place itself, and the hostess, Karen, were so inviting that we just started talking to her and Kelly, Debi, and Roxanna, the lovely women who run the place.

They explained that they were accommodating the overflow private banquet room dinner guests in the restaurant proper, and invited us to dine there. Well, they didn’t have to ask us twice! 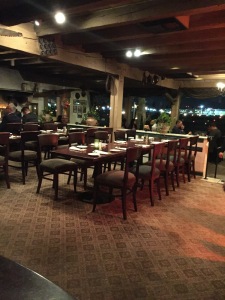 The view from our corner booth, at the tail end of the night. Photo by Karen Salkin.

We noticed several other people we know doing the same thing, but we opted to sit in a cozy booth by ourselves, so we could get a real feel for the place. And the experience was truly delightful, on every level!

It was charming, cozy, and warm, especially with the fireplace going. And the entire staff could not have been nicer or more accommodating. Alice noted, “This is a really great date place. In addition to the cozy interior, the outside has a really great vibe, with a view of the planes.” And there’s a “pilot’s table” in one room, where they host pilots…from World War II! I’d love to hear those stories!

The top-notch service continued with Ismael, our waiter, who was so attentive. Alice commented that “whatever we needed, he was there, making sure we were served everything exactly right.”

So, let’s get to the delish food already! 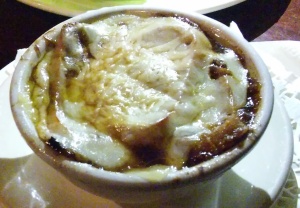 We didn’t order a lot of different menu items to tell you about, because we weren’t there to review the place, per se, but what we did sample, we enjoyed. [Note: And since we had no idea we were doing this when we left for the evening, neither one of us brought a good camera, so please forgive us that our photos aren’t fabulous this time.]

We began with the “exquisite” French Onion Soup, which Alice said was “so perfect on a cold California evening.” She added that “this is the place to get it the original way.” It was absolutely perfect, with just the right taste and texture, and the perfect amount of cheese and bread.

Then Alice moved on to the Chicken Lettuce Wraps appetizer, which she said was “a really nice choice, and great fun to put together.” I’ve never seen it on a menu other than of a Chinese place before, so it was a good surprise. 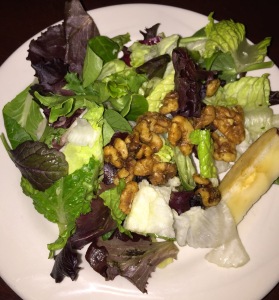 With my new stricter way of eating, I was thrilled with my Mixed Green Salad featuring apples and candied walnuts. (But I had to make it minus the blue cheese crumbles, which I’m sure would have added a lot to it, but it was excellent without them.) I opted for just oil and vinegar, rather than the raspberry vinaigrette that it’s usually served with, and it was still very tasty that way.

Then came the wonderful entrees. I had been treated to a lot of birthday dinners around town that week (and the one before, too!,) and let me tell you–the 94th Aero Squadron Restaurant’s entrees were the most generous ones I encountered.

The very first thing my eyes went to when I opened the menu was the Blackened Swordfish, and I was very happy with it. I had actually been trying to find swordfish on other menus for all my b-day meals, (because I can’t eat meat anymore, I don’t eat other fish, and I’m sick of chicken,) with not much luck. Someone told me that swordfish is not “in vogue” anymore, but that’s just nutty. I’m so glad the 94th Aero Squadron Restaurant is above that nonsense. 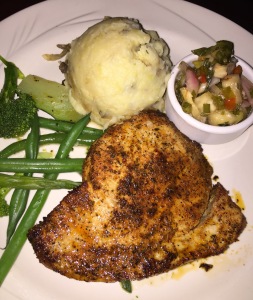 It was served with grilled pineapple relish mashed potatoes (that I believe had a hint of garlic,) and fresh veggies. There’s usually a lemon butter sauce for those of you who would like that. I wanted it just grilled in olive oil, and it was perf that way.

Alice went with the “yummy” Fresh Salmon, that she said was “not fishy at all.” She loved that it was “so moist and tasty.” It was accompanied by papaya relish, and came with rice pilaf (which was actually “very tasty” basmati rice that night, which she said was done with a “risotto twist”) and fresh green beans. She said she “can’t wait to come back for it again.”

You would think that we didn’t have room for dessert, but you’d be wrong. (Actually, you are correct about that. But we ordered it anyway.) They showed us our choices on a tray, and we absolutely could not resist.

Alice said her Apple Pie was “scrumptious!” She explained, “The top crust was made of caramelized pecans, and it was like a double dessert because it came with a scoop of vanilla ice cream. The whole thing was to die for!” I had actually never seen her finish an entire dessert before, so I was shocked to witness her devouring this one! 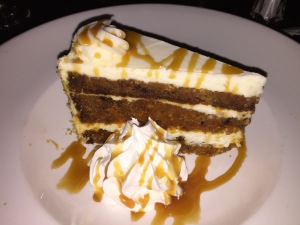 I took one tiny bite of my carrot cake, but realized that I was way too full for it. (And I’m not allowed to eat sugar, anyway, so I felt guilty “cheating.”) I wound-up bringing mine home to eat in tiny bites over the next few days. But Mr. X took one look at it, and said he had to have it. He deemed it to be “dense and thick” and “perfect for sweets-aholics.” He added that the whipped cream was “rich and fluffy,” and declared, “I don’t know what they did to it!”

I’m so glad we took the left-overs home because that action brought about my favorite touch of the whole night—their doggie bags. After they wrap the boxes in normal plastic bags, they put it all into canvas “goodie bags,” for you to re-use! How nice is that?! I’ll carry mine to the market with pride!

After that wonderful time, we can’t wait to go back and feast on their week-end brunch the next chance we get! (I’ve heard the entire place looks very different during the day, so it will be a whole new experience for us.) I have a big hunch that it will be something special. And, of course, we’ll let you all know about it, too!