Trending
You are at:Home»DANCE»DANCE/THEATRE: BURN THE FLOOR
By Karen Salkin on April 27, 2011 · DANCE, THEATRE

Go see this show!!! Do not miss it! Burn The Floor’s curtain call alone is better than most full shows I’ve ever seen! This is one time where the word “amazing” is not over-used–it truly is amazing. I wanted to see it again immediately the second it was over.

Before I tell you about it, I must thank Broadway LA for bringing this show to Los Angeles! I can’t tell you how many times I tried to see it in New York, and something always got in the way; either there were no tickets left, or the seats really sucked, or someone needed my help on the only night I had left in town. I’ve been trying to see it since Karina Smirnoff and Maksim Chmerkovskiy, who were starring in it during their summer hiatus from Dancing With The Stars, were engaged! And loyal viewers of that show know just how many seasons ago that debacle ended. (Sadly, to me–I liked them as a couple.) 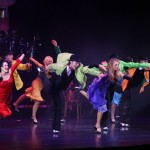 Burn The Floor began over a decade ago as a presentation at Elton John’s fiftieth birthday party. It was so spectacular that someone decided to mount it as a full-scale production. And it’s been a staple on the international scene ever since. (In my research, I’ve found conflicting stories of just who was responsible for what, but the original producer seems to be Harley Medcalf, with Australian dancer and choreographer, Jason Gilkison, directing and choreographing it. No matter whose idea it was, I’m grateful to them.)

I’ve always loved all forms of dance since I was a little girl and dancing ballet myself. I was beside myself when I got accepted at UCLA as a dance major, with a concentration on afro-jazz, which is kind-of far from Ballroom and Latin, although all dance is related, (as witnessed in Burn The Floor, which is billed as a ballroom dance show, but is sooooo much more!) I’m so much better with bare feet than with heels on–I don’t know how these ballroom girls do it! I can barley walk in heels, let alone burn the floor in them. 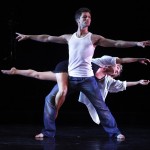 Photo of Pasha and Anya by Joan Marcus.

I was thrilled to see some of the dancers I knew from So You Think You Can Dance, and even the inane Superstars of Dance that did not exactly “burn” the airwaves a few summers ago. Every dancer on stage was incredible, but I was surprised to realize that I did have special interest in the ones I was familiar with: Anya (Garnis) and Pasha (Kovalev), Janette (Manrara), and Karen (Hauer) from SYTYCD. I even teared-up when Anya and Pasha first arrived on stage. No lie.

But Mr. X and my favorite dancer in BTF, England’s Giselle Peacock, didn’t make it on to that show yet. That’s a true shame because that girl can sell it! Mr. X had never seen her before, (I had, of course,) and he even singled her out.

Giselle Peacock--she moves so fast that there are no great still pictures of her!

You don’t have to know much about Burn The Floor going in except that it’s two hours of pure magic. Even if you’ve never seen ballroom dance before, which I don’t even see how that’s possible with all the dance shows on television these days, you’ll love it! I never once looked at my watch, yawned, thought of anything else, (like I do at just about every show I’ve ever seen–it’s where I get some of my best thinking done, including just what to pack on my next trip,) or said a word to Mr. X, except to make sure he could see the stage okay. (There were a lot of big and tall folks in front of us, let me tell you. Whew.)

I’ve rarely heard more cheers from an audience before. And after every number, too. Actually, often in the middle of the numbers. I loved that each one flowed into the other–there was no real stoppage in-between, no down time, no time to even catch our breath. It was a true whirlwind.

I was especially intrigued by the fact that there was not one ounce of fat on that stage! I’ve never seen anything like it. No wonder there was no after-party–none of them would eat. Seriously, I’ve never seen so many incredibly in-shape people in one place before, not even a gym.

These dancers worked their butts off. I think I even lost weight just watching them! (Fingers crossed.) My back disk was getting more herniated by the minute, though.

When we were walking out of the Pantages Theatre, Mr. X and I were remarking that we can’t believe how great the entire cast was. Unlike other show business disciplines, where you can totally fake it, (like oh so many singers and actors do,) dancers have to dedicate their entire lives to the pursuit of perfection, from when they’re little. They have to be almost singular of purpose. It totally showed in this cast. I still can’t believe that they have to do that performance more than once! Unbelievable.

Even though BTF is all about the dance, the ambience just wouldn’t be as great as it is without the accompanying instrumentals and vocals. Sadly to me, as the sister of a Broadway musician, the show uses a pre-recorded track, but on-stage are two wonderful percussionists, Joseph Malone and Henry Soriano. Their beats are the dancers’ life force. Add in the occasional vocals by Peter Saul, with whom Mr. X was most impressed, and Vonzell Solomon, so much improved since her stint on American Idol in the early days, and you’ve got yourself a show. And I absolutely cannot leave out the fabulous costumes, many of which I was drooling over. Almost literally.

So, please trust me on this one. You cannot imagine the magnificence of this show until you see it live. Television dancing pales in comparison. (I finally understand what the SYTYCD judges see in some dancers that we at home cannot. For example, Karen was absolutely stunning in person while she really didn’t shine on the TV show. I can now see why Nigel Lythgoe kept saying that she was the sexiest dancer ever.) We in Los Angeles, and the other cities on the National Tour, have this incredible opportunity to witness talent like this up-close and personal. You’d be a fool not to take advantage of it.