Trending
You are at:Home»DANCE»DANCE: WORLD CHOREOGRAPHY AWARDS 2021
By Karen Salkin on December 17, 2021 · DANCE

By now most of you probably know what a major fan of all things dance I am. It’s the most beautiful and exciting art, and never gets enough plaudits, in my humble opinion. 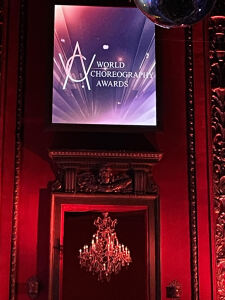 So I’m thrilled that the World Choreography Awards were back this year, to celebrate the creators of many beautiful works, in all categories of dance. The in-person-only show was one of the few events I missed going to during the pandemic.

The 2021 Awards were handed-out earlier this week, and I was delighted to attend the show after all of our almost-two-year hiatus. Sadly for me, my krump-dancing bae, Oldz Kool, had to sit this one out, but my friend Marc was more than happy to fill in for him.

Even though my favorite presentations of theirs have been the ones in close-to-me Beverly Hills, I so appreciate that producers Allen Walls and Cheryl Baxter-Ratliff choose different venues from time to time. It really keeps things extra-interesting.

This time it was held in the Globe Theatre in downtown Los Angeles. One of the nice things about this site is that the audience sat around tables or on big couches in the back, as opposed to the “auditorium” seating that is in most theatres. This set-up was more conducive to socializing during the show, (but only when nominees and winners were announced—not at all during performances, except to ooo and ahh.) 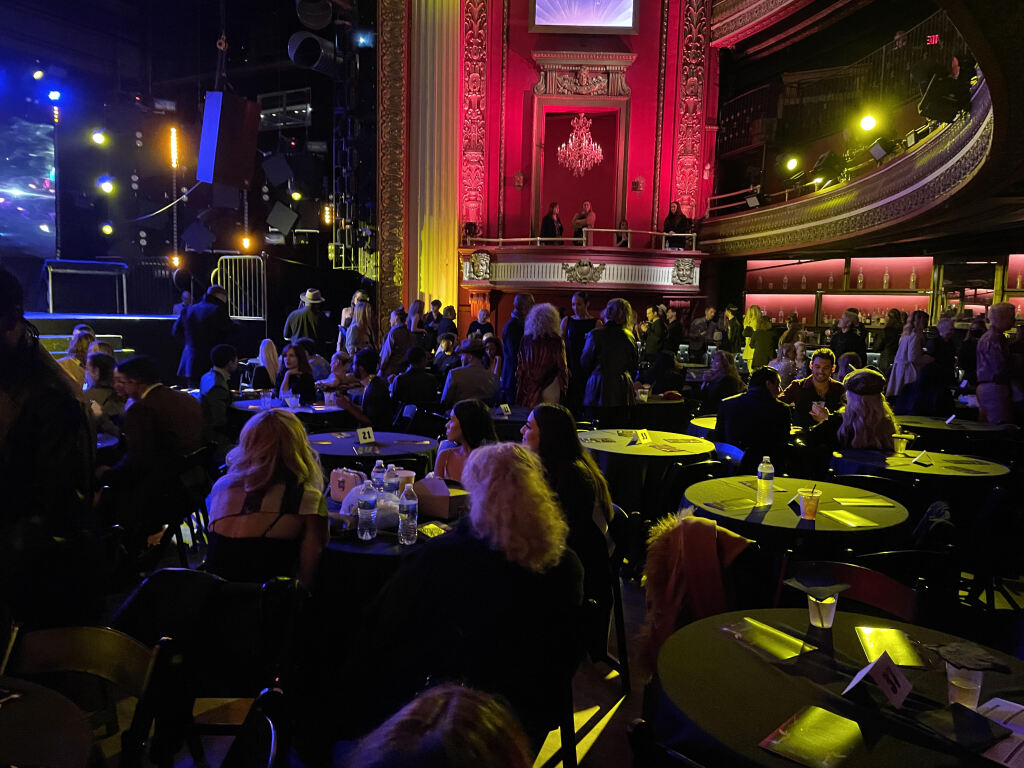 Some of the happy pre-show mingling. Photo by Karen Salkin.

Actually, for the entire night the assemblage seemed soooo happy to be out and about and together again that I have a feeling the mingling—before, at intermission, and after–was longer than the show itself! It seemed like the dancers, choreographers, press, and fans could not be torn apart. It was a very congenial situation.

Marc was so impressed with the World Choreography Awards that he kept asking me why this show isn’t televised. I agree with him—it definitely should be!

It’s always great to see snippets of exciting dance performances, such as Derek Hough’s award-winning Paso Doble on Dancing With The Stars, on such a giant screen. (Alas, he couldn’t be there in person to pick-up his Choreo because he was busy finishing-up his residency in Las Vegas.) On top of that, we were treated to incredible live performances that evening, such as the one that opened the show, featuring Anthony W. Johnson, (in his tighty whities, I might add!)

Part of the opening number. Photo by Karen Salkin.

It was also fun to see the arrivals—each “honored guest,” (I love that assignation, don’t you?,) was dressed so fashionably and, at the same time, uniquely. Marc could not stop commenting on everyone’s outfits, even their shoes! Meanwhile, I was happy to spy choreographers extraordinaire Tessandra Chavez and Christopher Scott, and later on, former Dancing With The Stars pro, Peta Murgatroyd, at intermission. Dancers are one of the most tight-knit communities I know of, and I adore seeing everyone together.

A good time was had by all, and now I can’t wait to see where the World Choreography Awards will be presented in 2022. I’m voting for back to Beverly Hills. But you know I’m always down for traveling to see great dancing, so I’ll keep you posted next year.