I recently was lucky enough to see three very entertaining but different dance shows, so I figured I’d tell you about them all together. I enjoyed them all, and am so happy that Los Angeles appreciates dance enough to bring us so many opportunities to see my favorite creative art!

BODY TRAFFIC AT THE WALLIS

Outside of anything by Sir Matthew Bourne, I deemed Body Traffic at The Wallis to be the best dance show of 2018. So I was thrilled to see them at The Wallis once again this year. Three of the quartet of numbers were new, with the final one being what I assume is among their most popular, as they presented it last year, as well. (You can read my 2018 review of that piece, A Million Voices, right here: itsnotaboutme.tv/news/dance-body-traffic.)

The one addition to that newly-danced piece that made me wish it had never ended is Myles Lavellee, dancing in just a pair of body-hugging shorts! I had no idea anyone else was on that stage with him! OMG! His beauty is just one more reason I love dance so much! (But, sadly for many of us, I have no pix of him in that number.) 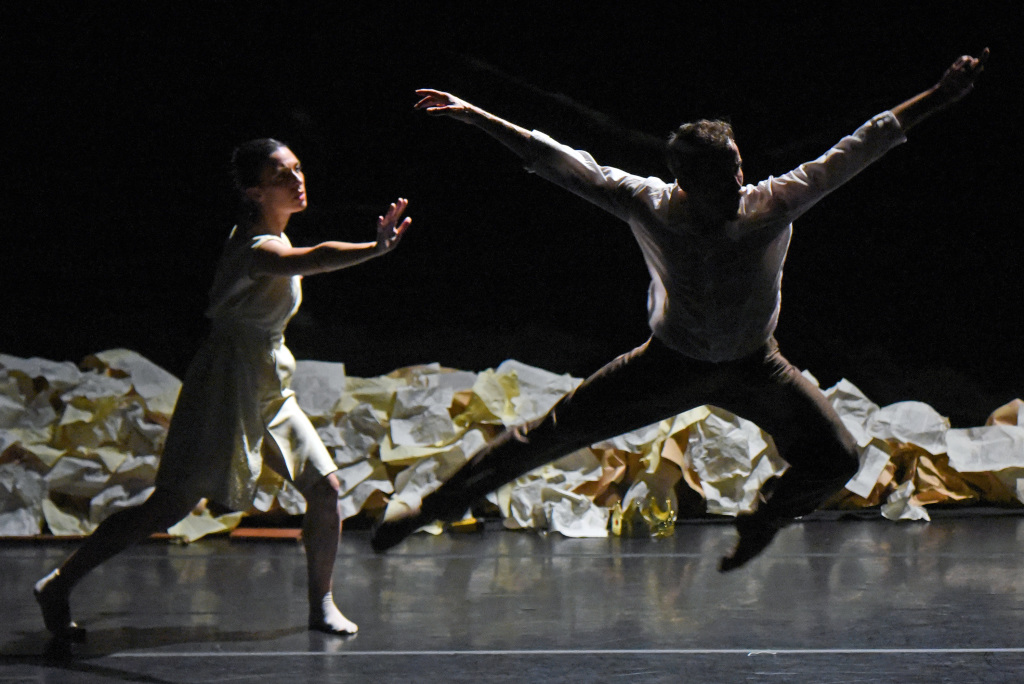 Tina Finkelman Berkett and Guzmán Rosado. Photo by Kevin Parry, as is the one, of the same duo, at the top of this page.

This year’s Body Traffic program opened with the stunning duet, (d)elusive minds, danced by Guzmán Rosado and one of the company’s two Artistic Directors, Tina Finkleman Berkett. That brilliant piece was waaaay too short for me; it was twenty minutes long but felt like only three! I loved the movement, the music, and the premise. Both dancers are outstanding, but I was especially fond of Guzmán–he is one of the loveliest dancers I have ever seen in my entire life! (I would love him more, though, if he shaved-off that porn stache! It really ages him.) And I usually hate hearing spoken words in a dance number, but this time it added so much. 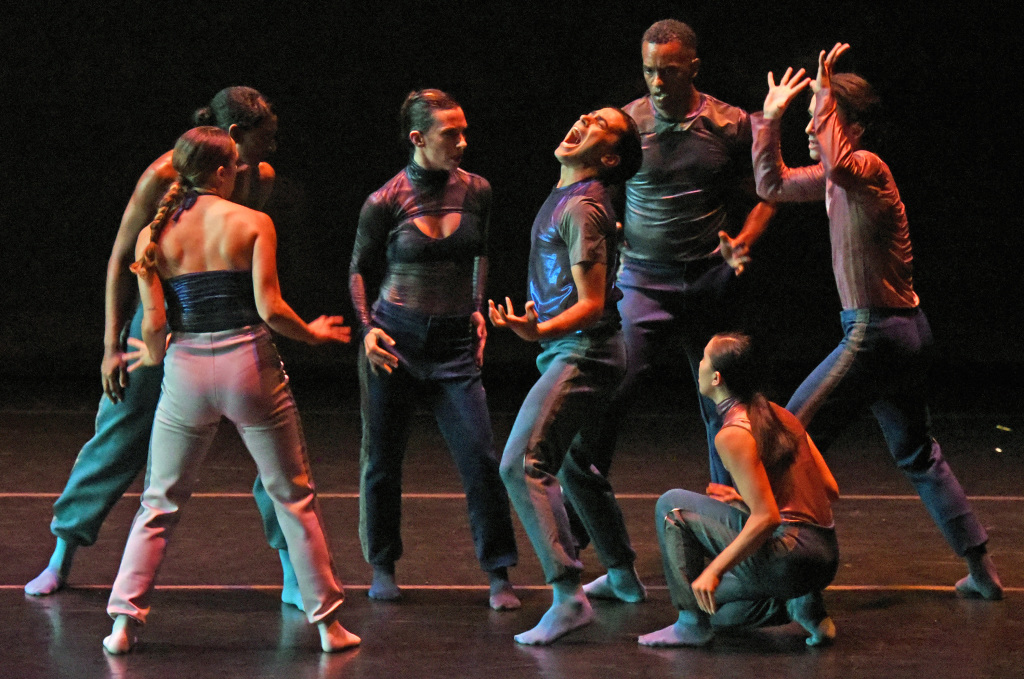 Then came Snap, a tribute, of sorts, to James Brown, featuring the number’s choreographer, Michaela Taylor. She opened the piece with such energy and hip-hop technique that she grabbed our attention right away. The krump-dancing Mr. X almost jumped out of his seat when he saw her work!

The music by DJ Tennis for the third one, Resolve, was so good that I wanted to get up and bust a move myself. The only thing that kept me in my seat was the riveting dancing of the duo performing it– Guzmán again, this time with Joseph Davis. 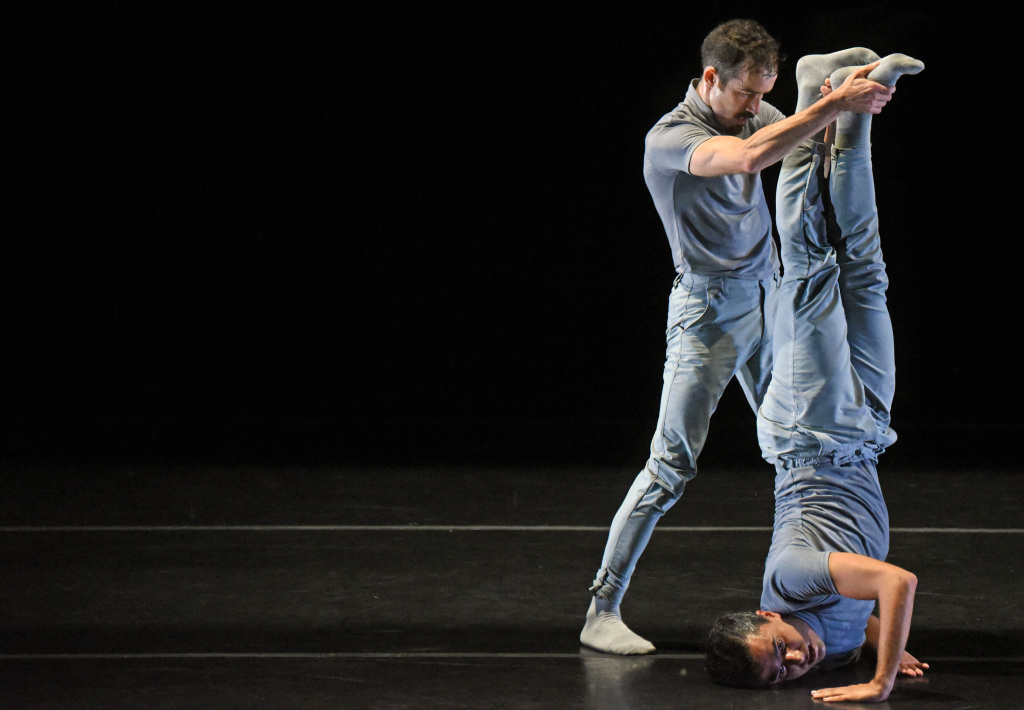 When I had this good fortune to return to my favorite theatre, The Wallis in Beverly Hills, after their ten-week summer hiatus, I was immediately reminded that this is the best theater in which to see any form of dance. No seat is too far away from the stage, and they’re all so roomy and comfortable. So I hope to see you all there for their next presentation!

I spent a lovely afternoon seeing the Los Angeles Youth Ballet present Peter & the Wolf, along with a few short contemporary numbers, at the El Portal, a theatre I love, in the uber-interesting NoHoArts District. 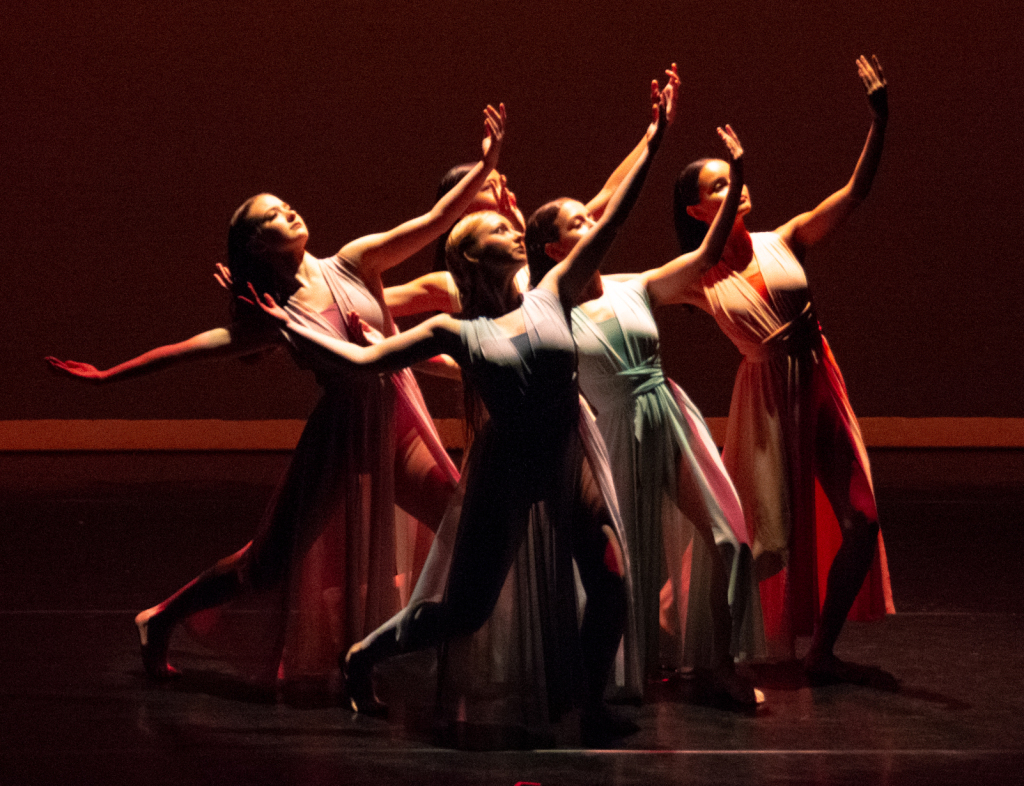 I was really wowed with not just this delightful dance show, whose first half was all contemporary, with the main act being one hundred percent ballet, (which is my favorite dance discipline; I get to see it all too rarely in LA,) but also that there was such a full house for a Sunday matinee, which was their last performance of the week-end run. And the audience was a very enthusiastic one, to boot.

Let me tell you–I adore seeing young people with a passion! And all of these junior dancers are good enough to possibly be featured on So You Think You Can Dance in just another year or two, so dance-lovers should all pay attention to them right now. I love being in on the ground floor of someone’s career, especially dance ones.

The whole show was very charming. It began with three contemporary pieces, choreographed by Cedric Dodd, whom My New Best Friend, Kelley Voy, a teacher at the academy, introduced me to after the show. [Note: In case you’re curious, Kelley earned that most coveted title because we admired each other’s shoes at intermission. And because the break was uber-long, we got to discover that we have a lot of mutual pals in Aspen. So you potential MNBFs better come up with something good if you want to wrest it away from her!] 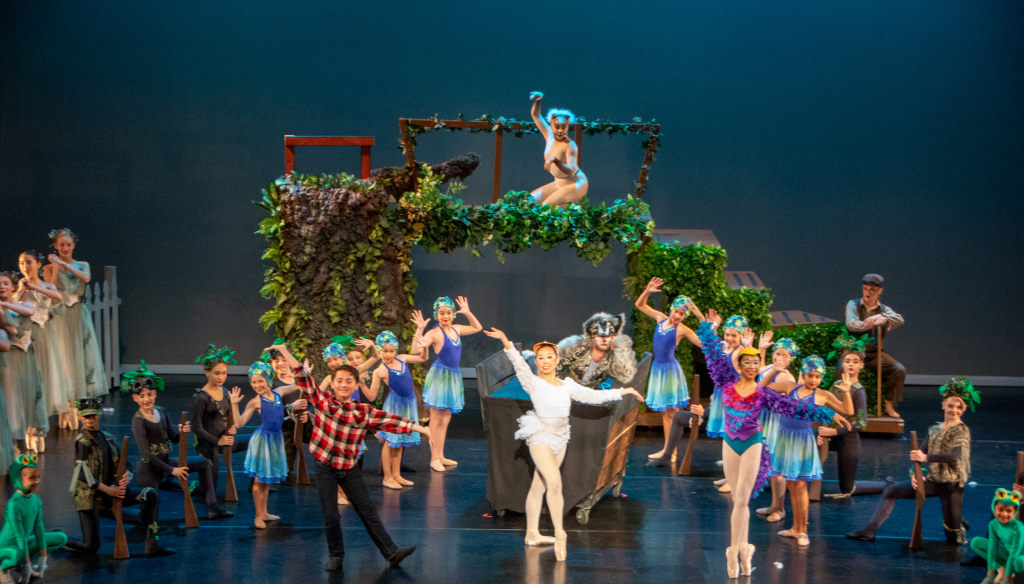 The second half was all Peter & the Wolf, danced beautifully by the young dancers (ages seven to eighteen) from Encino’s Los Angeles Ballet Academy. I got a kick out of seeing all the already-defined calf muscles on the tiniest of the girls; that shows how serious they are about dance. And those tiny tots were absolutely adorbs! They were dressed as little Esther Williamses and frogs to illustrate the pond where the duck lives. That was ingenious choreography by Conny Nathot.

And the teen girls were really impressive. They danced perfectly en pointe at such young ages! The cast changed at each performance, but I saw Jana Teruel as The Bird, Carly Fujioka as The Duck, and Annya Redfern as The Cat, who was especially good. And let’s not forget Malcom McLaurin-Takumi as Peter! His admirable performance shows us that more boys should be taking up dance, parents! 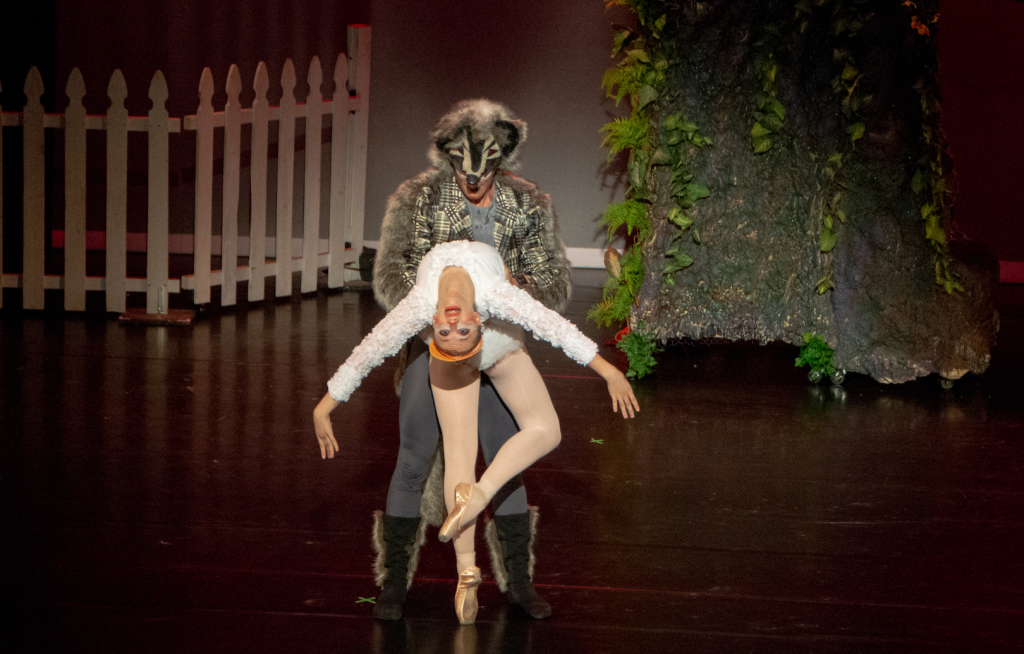 Adam Lendermon and Ellie Wein (who is not the duck I saw.) Photo by Iker Gutierrez.

As wonderful as all the kids were, we were thrilled to see grown-up Adam Lendermon, a longtime professional dancer and actor, as The Wolf, so up-close and personal like that. His expertise really brought panache to the show, even though the young ’uns really did hold their own with him! [Note: Dancing in costumes like this one seems to be one of Adam’s specialties—he spent a lot of time appearing in Cats!]

The company’s choice to present Peter & the Wolf was a very smart one—this ballet appeals to young and old, and gives an opportunity to so many of the dancers. The corps de ballet added so much beauty to the tale. 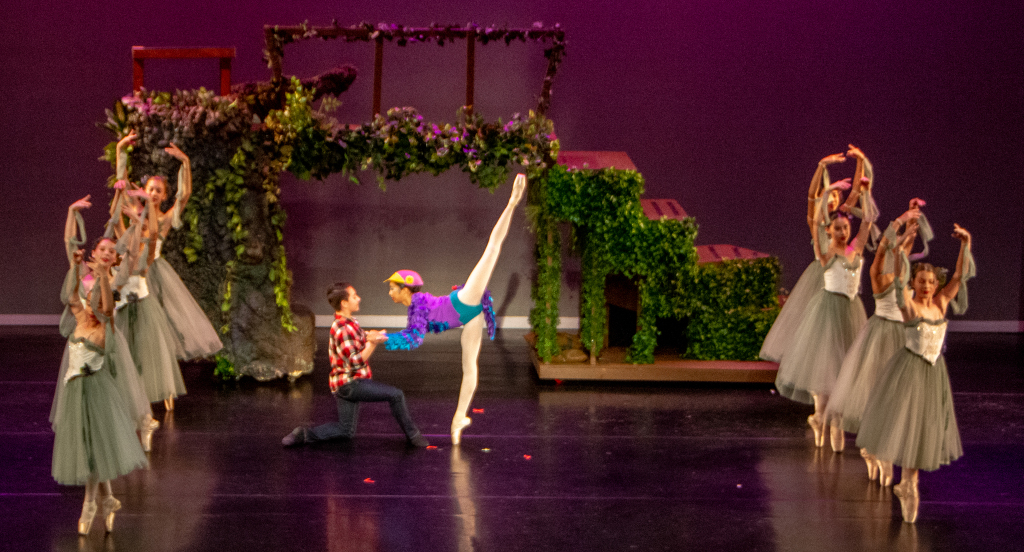 Until I did some research for this review, I had not realized that there were a plethora of narrators for this tale over the years. But for me, there’s always only been the inimitable Sterling Holloway—I could not imagine this tale being told by anyone else in the world, (although I would love to hear Dame Edna’s version some day—that must be a trip and a half!) But David Bowie’s very classy 1978 reading, which they used here, was just perfect for the ballet.

When I was little, I listened to my family’s old recording of Prokofiev’s Peter & the Wolfover and over again! (That’s where I learned to love Mr. Holloway, who was also the original voice of Winnie the Pooh.) I’m such a fan of that music that I’ve always chosen to ignore the fate of the poor duck, so I can still hear it without being traumatized by that part of the story. I had never seen a ballet of this saga until this one, so I thank Los Angeles Youth Ballet for filling-out that part of my ongoing Arts education. (And for giving us a happy ending in their rendition!)

Continuing my summer of international experiences, (most of which you already have, or still can, read about in this e-zine,) I was happy to recently see Leela Dance Collective’s kathak classical dance from India, Son of the Wind, at the Ford Theatre. I had forgotten how beautiful and summery the atmosphere is in that lovely outdoor arena. 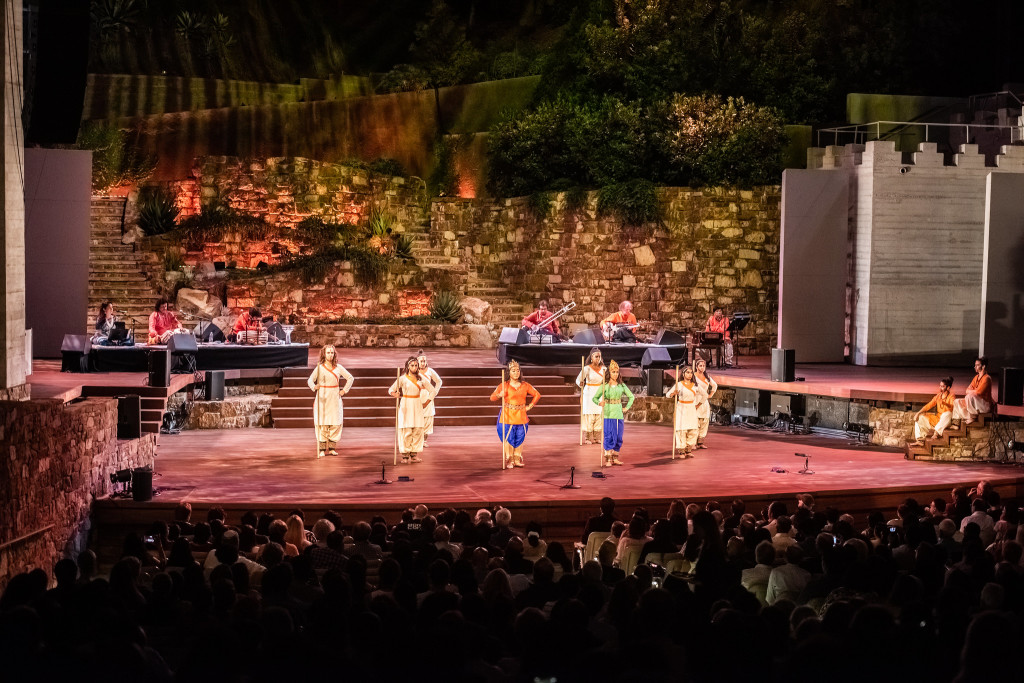 The show was performed by an all-female troupe, many disguised as men. I totally appreciate that effort because it reminded me of something I had done for a guy pal once. We were watching basketball together, and he told me that as much as he really did enjoy watching sports with my uber-knowledgeable self, he missed having a guy pal to do it with. So I went in the other room and put on shorts, taped my chest down, put on a white ribbed tank top and a backwards cap with all my hair up underneath it, and then the two pièces de résistance–I not only used make-up to draw-on stubble, but I cut off some of my hair and taped it to my chest! How’s that for dedication?! And it’s basically what the Leela Dance Collective did to achieve their male personas. (Only I doubt there was any hair chopping involved!) 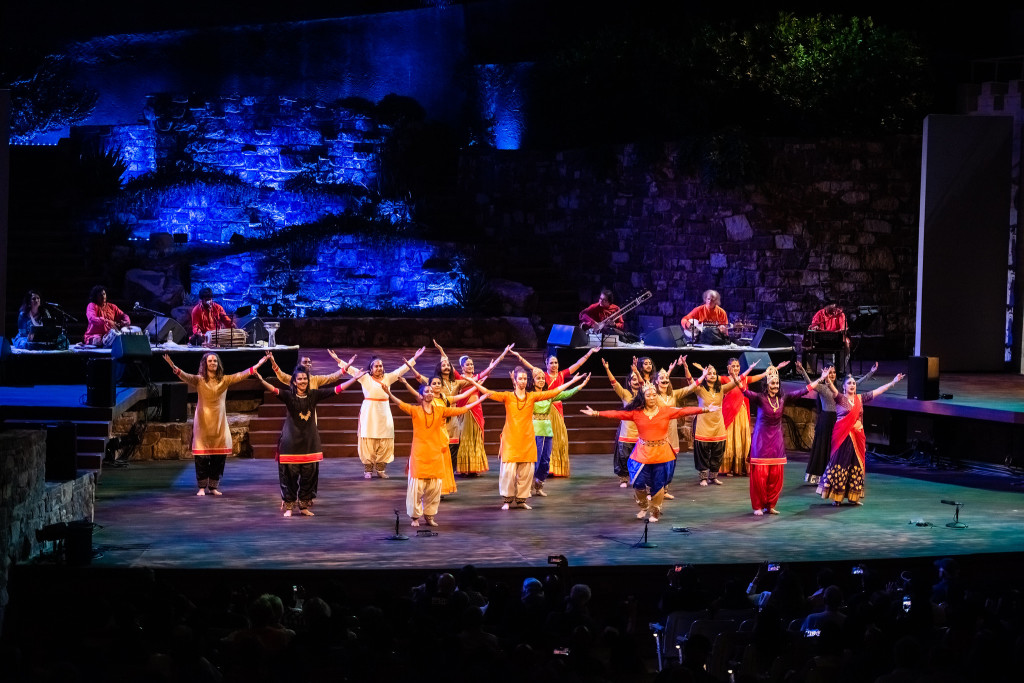 The whole presentation was very different and interesting. And it wasn’t just the dancing; it was a complete self-contained show. There were fabulous Indian musicians on stage, as well, sort-of in the background but definitely with spotlights on them. And there was a narrator to explain the story that was unfolding before our eyes, which was most helpful.

Son of the Wind showcased a different style of Indian dancing than the one I’m used to, which is the Bollywood choreography that I’ve seen on shows like So You Think You Can Dance. So I loved seeing something new and unexpected. And in the perfect setting for it, to boot!