I began my action-packed Easter week-end by seeing this Jesus-themed modern ballet performed by the Los Angeles dance company, Luminario Ballet.  What a fun time, from entering the building until the very end. 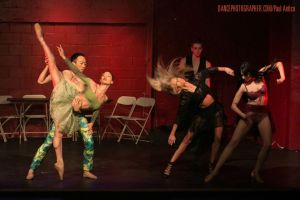 Photo by Paul Antico, as is the big one at the top of the page.

It was at a really interesting venue that I had never heard of.  Nor even imagined!  Faisdodo appears to be a dance club, but, as the woman behind me on the ladies room line told me, it’s many other things, as well.  (I knew something was up when there was a sign on the way to the uni-sex restrooms that read something to the effect of, “There’s no smoking, of anything!”  But I’m here to tell you that, by the aroma some of the guests were rocking, I don’t think that everyone heeded that warning! Hey—it was a holiday week-end! And these are the performing arts!)

Faisdodo is in the West Adams area of Los Angeles, which I had no idea where that was.  I’m always a bit fearful of things in life with which I’m not familiar, but I needn’t have worried in this case—it’s in a happening section of town, right near LaBrea and Washington.  No biggie at all.

And it’s a fabulous venue!  It has a New York City, no—Brooklyn, experimental theatre vibe to it. I love places like this! 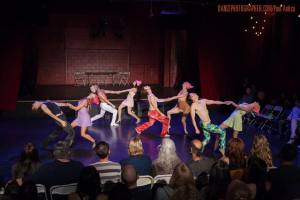 There’s a stage at one end of the humongous room, which also includes a bar and a couple of booths around the periphery.  But the main component is a big beautiful dance floor, which is even padded a bit for that purpose, a situation of which the performers that night were thrilled.

So, now let me tell you about the show itself. The evening started off with a local guy sort-of rapping a story about his upbringing.  I’m sure it was okay, but I was there to see dancing, so, (I apologize to him for saying this,) I couldn’t pay that much attention to him.

And then the performance of the original program, The Last Supper, began. It’s a series of eight short dances telling the story of that fateful night, but in a very different, hip, of-today way.  The style of it all is modern ballet, as opposed to classical, which is what I love more, but I really enjoyed it.  The show actually looked much more like contemporary dance, except that two of the girls were on pointe, my favorite thing in the dance world to see. I could barely take my eyes off their feet when they were on! [Note: I danced ballet since I was very little, but because of my way-too-bendy ankles and uber-short toes, dancing on pointe was difficult for me. So dancers who are not only able to do it, but toe-dance beautifully, are the most special people in the world to me.] 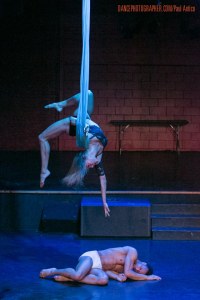 And the Luminario cast didn’t dance just on the stage; they used the entire floor. And ceiling, too, actually! There were several numbers that were either full-on aerials, or incorporated that art into the rest of the choreography. It was really a privilege to see such wonderful talent so up-close and personal. (Yes—really personal—sometimes members of the company danced right up to us, and, at one point, even pulled several audience members up to the stage to dance with them! I was invited, but declined because, in this case, I’d rather see than be seen! And yes again—that does happen occasionally! Not often, but every now and then.)

Even though there was an octet of talented dancers, Sheila Burford was the star, by far.  She could do everything!  Her aerial work was not to be missed.  You could tell right away that she has spent multiple years performing in Cirque du Soleil! (And she’s pretty, too. I guess I should hate her!) 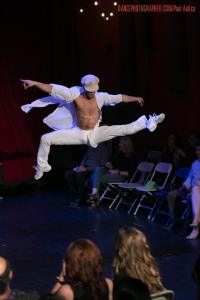 Jamal Story as Jesus, (he also co-choreographed the show with Luminario Artistic Director Judith Helle,) was pretty special himself. I spent half the show coveting his abs.

The eight of them put together don’t have as much body fat as even one of us mere mortals! (I guess I better start dancing again. If I do so right away, maybe I can be in as unbelievable shape as these guys—when I’m a hundred and twelve!)

When the show was over, and after the enthusiastic ovation, the group invited the entire assemblage to stay and join them in a dance party. Had I been outfitted in my club attire, rather than in my spectator duds, I would have done just that. (Yes, even with my broken back! The pull of a good DJ is too hard for me to resist. But wardrobe vanity overrides even hip-hop music!) 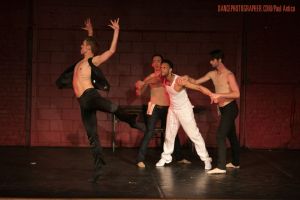 There was only thing wrong with the entire production–it wasn’t long enough!  When was the last time I said that about any show?! Luminario Ballet definitely got the memo to always “leave ’em wanting more!”

To that end, you can see Luminario Ballet for yourself, at the LA Dance Fest. It takes place on Saturday, May 6th, at Diavolo at the Brewery Arts Complex in Los Angeles. For more info, please go to www.ladancefest.org.

And lastly, for those of you who are as outraged as I am about all the cuts to funding for the arts in these hard times, please support local dance companies such as Luminario.  I know they would really appreciate it.