Trending
You are at:Home»DANCE»DANCE: LULA WASHINGTON DANCE THEATRE AT THE WALLIS
By Karen Salkin on January 16, 2018 · DANCE

To commemorate Martin Luther King Jr. Day, The Wallis in Beverly Hills presented an entire week-end of programs from the Lula Washington Dance Theatre, leading up to yesterday’s holiday. And, of course, I was there all three nights. (Because, besides paying my respects to Martin Luther King Day, which was finally on his actual January 15th birthday this year, that’s how I chose to celebrate my January 14th birthday week-end!)

I had seen just one number from this company prior to that, (The Message, which they repeated here,) but it was so powerful that it made me look forward to seeing them again. I’m glad that I saw the trio of programs because, although my favorite piece was repeated on two of the nights, and the most important one was featured on all three, I got a well-rounded impression of their repertoire and dancers. And it’s all positive. Actually, beyond positive! 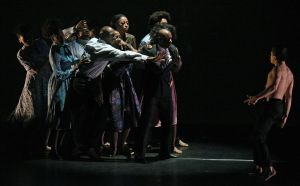 There was a real mix of subjects. Lula Washington Dance Theatre is a modern dance company, but we were treated to all different styles under that one heading. There was something for every dance fan.

Since the raisin d’etre for the timing of the presentation was Martin Luther King Jr. Day, they performed The Movement, a tribute to the great man, on all three nights, which was very appropriate. And on two of those evenings, they augmented that number by including The Little Rock Nine, which is a tribute to the civil rights movement, specifically the nine African-American students who were chosen to integrate Arkansas’ Central High School in the fifties.

As much as I respect all that, I have to say that I was a bigger fan of the lighter, happier routines that were presented along the way. On the closing night, the number that came right after all this heaviness was the whimsical Snowy Day, which I adored! It’s the dance interpretation of Ezra Jack Keats’ award-winning 1962 children’s book of the same name, and was the perfect showcase for that spot in the program. 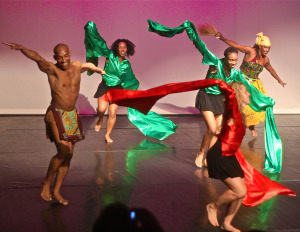 Global Village, although not with most of the dancers at The Wallis.

There were two numbers that were the most my kind of dance. One was on the middle night–Global Village, which is a very upbeat, energetic rendition of my favorite dance style, Afro-Jazz, with non-stop action.

But my absolute favorite of all the nights was the exuberant Reign, choreographed by Rennie Harris, who is one of the pioneers of hip-hop, which you all know that krump-dancing Mr. X and I are major fans of. (I wish that these incredible dancers had been around in the late ‘90s, when I was running my hip-hop clubs! Although I would have been too intimidated to be on the dance floor with any of them!)

I can’t even describe this number (that’s pictured at the top of this page) except to tell you that I saw it twice that week-end, and that’s not even enough. I could see it every night! And that’s no exaggeration! One of my pals said it was “mind-blowing!” But I was surprised that the dancers could stay on beat on Saturday night with the awful clapping-along of the audience. They were throwing me off just in my bopping to the music! 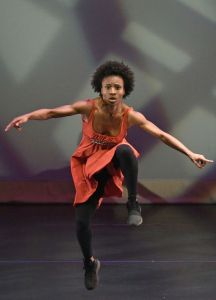 Each dancer must lose a dozen pounds a night doing that one routine, although I hope not–the percentage of body fat on the entire ensemble put together is probably one-tenth of that of any mere mortal! They did a few scantily-clad presentations over the three days, and let me tell you, I’ve rarely seen more beautifully chiseled people! That’s beyond impressive because, besides being stunning to look at, it shows their amount of dedication to their art. We should all love what we do as much as these dancers obviously do.

Speaking of the dancers, they were all incredible, but there were a handful of stand-outs for me.

Krystal Hicks, (whom I first wrote about here last year: itsnotaboutme.tv/news/dance-la-dance-fest-at-theatre-raymond-kabbaz,) is amazing in all aspects, but the height on her leaps is ridiculous. Her vertical leap is probably higher than Spud Webb’s!

Then we have Saidiya Imari, who can portray pain better than just anybody I’ve ever seen! I swear, when she did a solo that is actually titled Pain, I felt like I was back in New York, watching my first Alvin Ailey performance. She also danced Rosa Parks in The Little Rock Nine with that same angst; we felt her pain and pride in the audience. 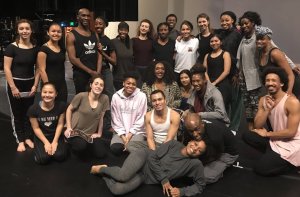 The entire Lula Washington assemblage, backstage at The Wallis.

And I’d love to harness the energy of Michael Tomlin, III in Global Village. That guy was still giving it his absolute all as the curtain rang down. And I have a feeling even beyond that!

But my favorite troupe member is tiny dancer Jasmine Francisco. She has the best bounce and fluidity of them all. Everything about her being was in movement at all times. I love that style!

Now to be fair, since I lauded my favorite dances, I also have to tell you the little bit of the other side of the coin for me. Each night had a different theme, and that of the middle night was “Dances With a Meaning,” which I just may be too shallow for. I intensely dislike talking and singing with my dance, (unless it’s an outright musical, of course,) and the pieces on that particular evening featured a lot of talking and yelling and even some primal screaming. So that was my least favorite program. Except for seeing the aforementioned near-naked men of Search For Humanism; that one perked me right up! (I did mention that I’m shallow, didn’t I?) 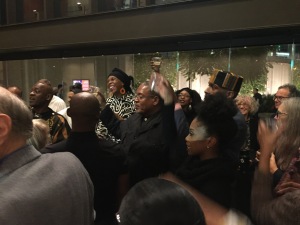 The closing night celebration, with Lula Washington right in the middle, and her husband and business partner, Erwin Washington, to her left. (Then, to his left are dancers Christopher Frazier, in the hat, and Jasmine Francisco.) Photo by Karen Salkin.

A perk of seeing dance at The Wallis, (besides that the sightlines are great for viewing movement,) is the post-show “Talk Backs” with the artists. So these audiences were invited to stay after the first two performances for discussions with the dancers and Lula Washington herself. That was followed by a champagne toast the first night, and an even bigger celebration to put a big fat bow on the entire triumphant week-end. I stayed to applaud them all, as I do here now.

And I must also give a bit of applause to the venue itself. I happened to sit next to a board member one night, and he reminded me that The Wallis presents more dance shows than any other theatre in town. What a wonderful achievement!!! So, major props to The Wallis for that specialness!

For more info on either of these entities, just click on these sites:  www.thewallis.org  www.lulawashington.org