Trending
You are at:Home»DANCE»DANCE: L.A. DANCE PROJECT AT THE WALLIS
By Karen Salkin on April 9, 2018 · DANCE

L.A. DANCE PROJECT AT THE WALLIS

Let me not bury the headline—I loved this dance show at The Wallis in Beverly Hills! And I had a bit of concern about it beforehand. I had seen a different presentation from L.A. Dance Project last year, and it was so–let’s say, not to my liking—that when a guy fainted in the audience during the second number, I was really suspicious that he was just trying to get out of seeing the rest of the show.

But this one was divine! The entire quartet of pieces was lovely and fluid. I would have been happy if the show had been longer this time! (But always leave them wanting more.)

I have to tell you about each number because I’m a fan of them all. First up was Martha Graham Duets, a trio of pas de deux from the legendary Graham’s repertoire. I have to admit that I have never been a fan of hers, even when I studied her technique as a young dancer, but I loved every second of Duets’ eight minutes! It featured simple yet interesting choreography performed by very talented dancers. 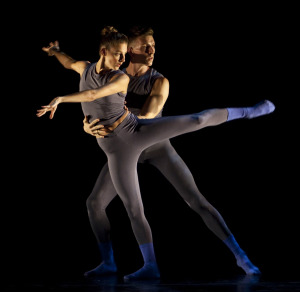 Helix. Am I right about those blue socks or not? Photo by Rose Eichenbaum.

Then came Helix, another short burst of creativity from six dancers, in all different configurations. The only thing wrong with it was the explanation of their wardrobe in the program. It said, “The dancers’ slate gray unitards paired with electric blue socks lift the piece out of time, place, and narrative…,” but I disagree with that assessment. Even though that’s one of my fave color combos, I found the socks to be very distracting. No matter, though—I still loved everything else about this one.

After an intermission, during which I spied still-beautiful and classy Jaclyn Smith in the ladies room, (way too few celebs seem to be fans of dance these days,) I was ready for Sarabande. This one was made extra-special by two things. One—it was choreographed by Benjamin Millepied himself, (the Artistic Director of this company) and two—it featured a duo of musicians (one at a time, though,) right there on the stage with the dancers! Devan Jaquez played flute for the first two sections, and Fabiola Kim took over the rest on violin. (She even received the most applause of anyone at the end, but I have a feeling that also had a lot to do with the fact that she’s a beautiful, hot young lady. This is still L.A., after all.)

The solo on-stage accompaniment of each section made it all so very haunting and captivating. And dancer Francisco Mungamba was so fabulous in his brief solo that he actually elicited gasps and applause from the audience right then and there! 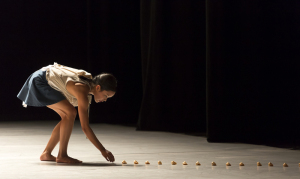 See what I mean about the inane cookie trail? Photo by Lawrence K. Ho, as is the big one at the top of this page.

Which brings us to the last number, which is about a mysterious family, and has the odd moniker, Yag, (a real word, actually, which has more than one meaning, but I don’t know which one they were going for here, so I’m not going to pretend that I do.) I was absolutely in love with all the clever movement and unusual choreography by Ohad Naharin. But I do have to say that it did get a bit slow and silly in the middle when one of the “family members” spent an inordinate amount of time laying down fortune cookies across the stage, one at a time, and then, equally slowly, a couple of the others walked on them, crunching as they went. I didn’t get that bit at all, and could have lived without it, (especially because I was hungry at that point! And, seeing food being wasted is never to my liking, ravenous as I was or not.) 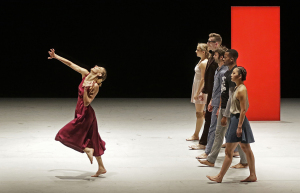 Also, that section’s blurb in the program states, “As the ballet’s intriguing narrative progresses, the audience is left to interpret the family dynamics at play, informed by the work’s audacious, curious, and imaginative staging.” The only thing I got out of it is incest, a topic I don’t like seeing played-out in my dance shows. But the dancing in this one was so spectacular that I let it go. (One weird thing for me was that, once Rachelle Rafailedes, as the mother, donned her husband’s brown suit over her own red dress, I noticed her fabulous dancing even more that I had before! Strange, right?)

The characters all state, out loud, (which you know I hate in dance,) that the parents are both dead, but we can’t figure out how the mother died. It appears she killed her husband after he raped her daughter, but what’s the rest of it? And, as the kids say they never met their grandfather, why was he there the whole time? I really wish they had given us the synopsis so we would know what all the movements were showing us. I hate having to figure anything out for myself—just tell me what you want me to know, people!

But again, nothing else mattered to me when my eyes were treated to such beauty all night. And my ears were, as well, with those two live soloists. So, if ever you get to see L.A. Dance Project perform these four numbers, I say grab that opportunity! I know I will again. 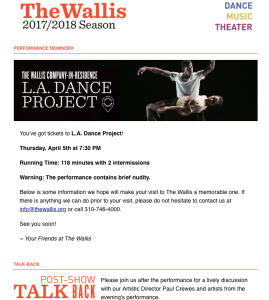 Just a bit of the info The Wallis sends out before your visit there that night.

Another dance show to not miss at The Wallis is this week’s afro-jazz version of the classic ballet, Giselle. I’m absolutely jumping out of my skin to see this one by South African choreographer and dancer, Dada Masilo. You know that I’ll tell you all about it afterwards, but I hope to see all my fellow Angeleno dance fans there.

By the way–I have to laud The Wallis for doing something I’ve never seen any other theatre do for its patrons. An alert is always sent to ticket-holders on the day of the performance, so that they know the whole story before they even leave the house! The info included can be what streets are closed, if there’s a food truck on-site that night, where else you can eat in the ‘hood, and running time of your event! Very classy. And appreciated, by me at least.