Trending
You are at:Home»DANCE»DANCE: KENT BOYD AND COMPANY IN DANCEWEAR PHOTO SHOOT
By Karen Salkin on May 18, 2011 · DANCE, Uncategorized

I first became aware of the Sugar and Bruno dancewear company at a gifting suite last year, and the rep said they’d be sending me some clothing, which looked great, btw, for the krump dancing Mr. X, and some for my hip-hopping self, as well. As happens with a few products nowadays, my info got passed to on to someone else, who never sent the items, but, with so many more wonderful gifts to write about, I forgot all about it. 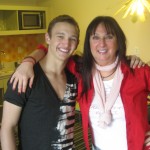 So, when, back in February, I was the only journalist to be invited to the shoot of their new catalog, (don’t worry–I don’t get why, either, but it sounded good,) I figured I should go check-out their line to see exactly what I missed. But mainly, meeting the adorable (in person as well as on TV ) Kent Boyd, who came in second on last season’s So You Think You Can Dance and was one of the models for the shoot, was the attraction of showing-up during a super-busy pre-Grammys week.

So now, with SYTYCD getting ready for its season premiere in just a few weeks, right after the American Idol finale, I figured this is an excellent time to share my insights, about the dancewear line, the shoot, and, most importantly, Kent. 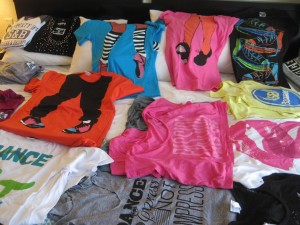 The session was on the roof of Venice’s Hotel Erwin, which is kind-of funky chic. Sugar and Bruno’s new lines were as colorful as the ones I had drooled over at the suite the year before, but I didn’t get to really check them out in depth; the personnel were all very busy doing their work. On the first day, I got to spend a few seconds with a former Rockette named Keltie Coleen, and one of SYTYCD’s main choreographers, Canadian Stacy Tookey. Stacey was darling, informative, and looked way younger in person. I can see why the dancers always seem to love her on the show. 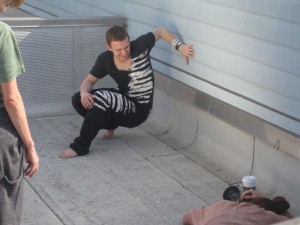 But the only reason I schlepped all the way back to the hotel the next day was to interview Kent Boyd. Since everyone knows I watch that show, I always get asked if I thought his farm-boy goodness was an act, and I answer of course not! And now I know I was correct–he’s exactly as adorable and enthusiastic in person as he was on the show. Super honest, as well.

The only thing I’m sad about is that he told me he’s concentrating more on acting than dancing, and that’s a loss for us fans of his wonderful movement. The good news is that he’s still single; I think everyone expected him to be an item with winner Lauren Froderman by now, but no. (Yay!) He’s moved to Los Angeles and is rooming with third place finisher Robert Roldan.

Since everyone was at the shoot for serious business, I got to spend only a few minutes with him, but I have something amusing (to me, anyway) to tell you about it. As I was leaving, a photographer I met the day before was arriving, and asked if he could take a couple of shots of Kent and me. So, I went back up to the roof with him, and obliged. [Note: He never did send them to me, so I can’t share them with you. Why doesn’t anyone do what they say they’ll do?!]

While we were doing the “good pals” pose, I noticed that Kent smelled so good! I’ve rarely thought that about anyone, so I couldn’t help blurting it out. (You should always give people their props, so I’m glad I did.) I left right after that, and on the drive to my next event, I had a funny revelation, so here it is: Mr. X and I always noticed one of the other male contestants sniffing Kent when they stood off to the side on SYTYCD results nights, and we just thought it was kind-of creepy. (He just put his head on Kent’s shoulder or neck and sniffed–I swear. But Kent didn’t even seem to notice.) Now I know why the guy did it–he couldn’t help himself! Kent just smells so great! I was thinking of standing there and taking a whiff myself! I should have asked his secret, but maybe it’s just some farm boy kind-of thing.

So, if ever you meet him, tell him Karen says he smells the best ever, and now I totally understand why the other guy was sniffing him! He should know what you’re talking about.

And don’t forget to watch this season’s show. Maybe some of the dancers will even be wearing dancewear from the line Kent modeled for!