Trending
You are at:Home»DANCE»DANCE: JACOB JONAS THE COMPANY
By Karen Salkin on May 15, 2019 · DANCE

I’ve met choreographer Jacob Jonas several times over the past two years, when we were both supporting other dance shows at my favorite theatre, The Wallis in Beverly Hills. So I was glad to finally get to see his work, which was mostly excellent, but a bit yin and yang for me.

This company is comprised of absolutely superior dancers. I was wowed by the beauty of all of their movements, which Jacob so handsomely choreographed. The actual dance was all incredible! 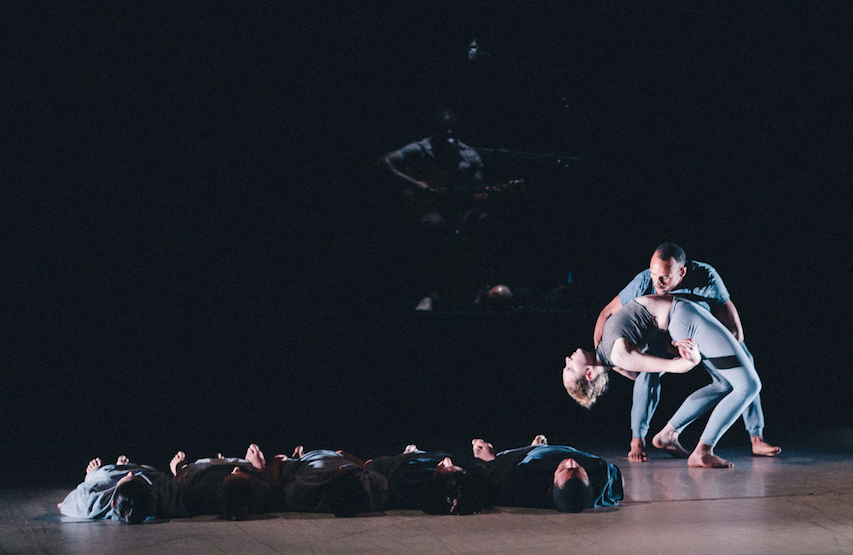 Photo (of the dancers on the floor, and the musician in back,) by Matthew Brush, as is the one at the top of the page.

As far as the numbers go, two of the pieces were about social consciousness, only one rightfully so, in my educated opinion. The premise of the other one, (which I’ll discuss last because I’m going in order of the presentation,) annoyed me so much that I had a hard time enjoying what I was watching.

As interesting and very creative as most of the steps were, by the fourth piece, they became too repetitive.

And three of the four went on way too long. (The second number was just four minutes, so no issues there!) Each of those three overstayed its welcome. I think Jacob showed us every move that ever popped into his mind!

But again, I really did love the movement and performers, so it was a worthwhile show.

So let’s get to them in order.

Crash: Only an LA guy could have choreographed this one, and I was totally feeling it. The dancers were waves, and Okaidja Afroso provided the very interesting live music, along with sounds of the ocean, which I always love. (But many of us use those same wave sounds, both real or mechanical, to go to sleep, so that aspect may have been a bit too relaxing.)

I was especially a fan of the varied ocean-hued outfits by Tessa Matthias; they were perfection. 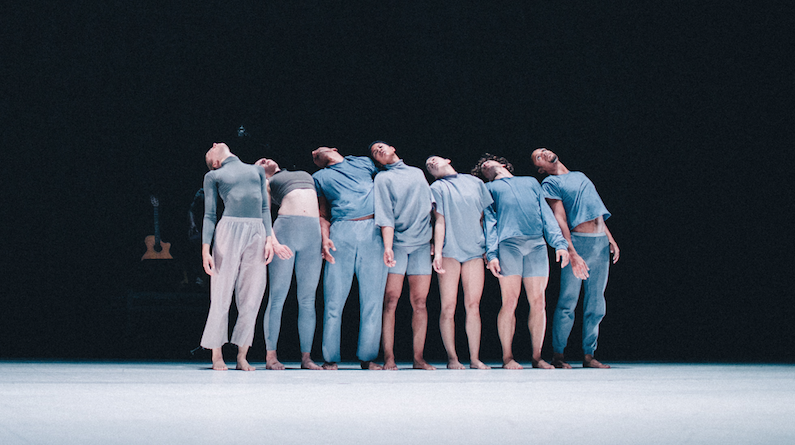 The choreography was all pretty fascinating. I absolutely adore when a choreographer makes clear what he’s going for, which was totally the case with this number.

The funny thing is that all the beginning moves, which took place with the dancers rolling on the floor, to simulate waves, is exactly what I do with my legs and arms every morning! I actually scared my mother that way once, when I stayed on the floor of her hospital room; she forgot I was there, and when I stretched my arms up from my mattress that first morning, she screamed! I should have told her I was dancing!

To The Dollar: This was that super-short one, which made it a breath of fresh air. It was about how both genders should be paid equally for the same jobs, and was cleverly danced in male-female pairs, to just spoken words, which I usually shun in dance, but Senator Elizabeth Warren’s Equal Pay Day speech was marvelous. And I appreciate that the company was extolling equal pay for equal work. 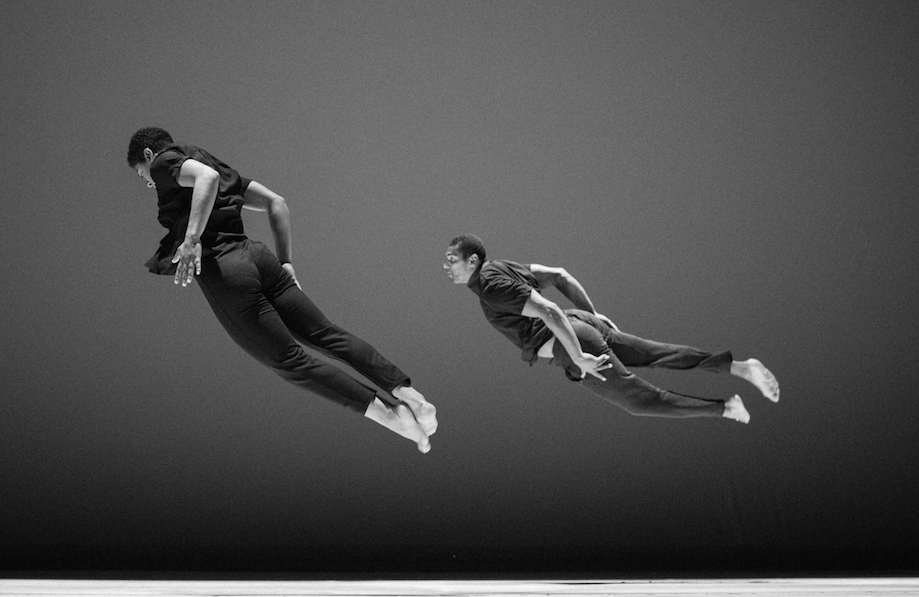 Viceversa: This World Premiere was the weakest piece for me.  Even though I’m sure that the LA dance community was the most interested to see this collaboration between Jonas and award-winning choreographer Daniel Ezralow, whose own company I’ve lauded in the past, it was a tad tedious to me.

I can’t imagine any other sexagenarians dancing as well as Daniel, (except for the amazing hip-hopper, Toni Basil, who was in the audience that night and is actually older than that, and grown-up krump dancer Oldz Kool,) so he was really interesting to observe. He gets a slight pass because of his age, but basically, this duet looked like some weird “fighting and making-up” skit between Adam Sandler and Al Pacino! I have no idea what they were going for. (And the program explanation did not clear it up. At all.) 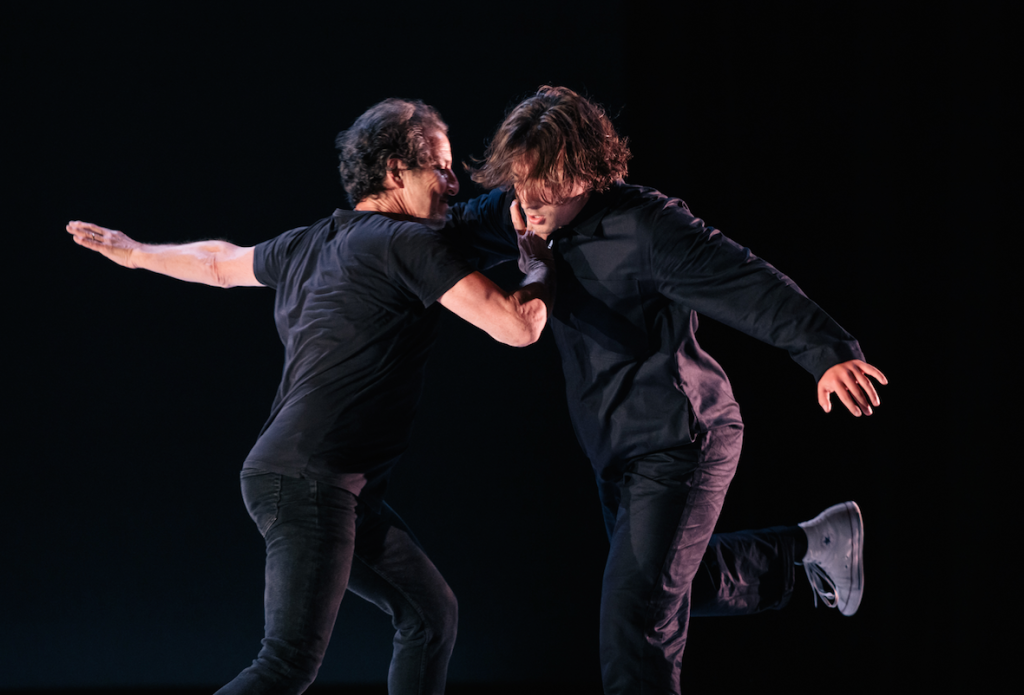 Surprisingly, these two very talented creative men were the only dancers all evening who did not live up to the rest of the cast’s prowess in the category of “dance ability.” But no worries for them–one can be an outstanding choreographer without being the best dancer in the world—they’re two different areas of expertise.

On a non-dance note, with so many people having neurological issues these days, they should perhaps nix the flashing lights if ever they perform it again. They add nothing.

There’s Been A Study: Even though I’m not big into pastels, the simple chartreuse and lilac outfits in this one made my mouth water. Tessa Matthias just might be the Costume Designer of my dreams!

And, once again, the dancers proved their brilliance, to superb choreography.

But, outside of those two areas of excellence, I had so many issues with this routine! First of all, it was waaay too long!

Second of all, the live music was brutal. I would have given-up every secret I ever had to make it stop!

While, once again, I loved and admired all the creative and fabulous steps I was seeing, I have to tell you that Jacob Jonas is sure a fan of people rolling around on the floor! This number, about education, seemed to be basically the same as the first “waves” one. My friend Marc put it best when he whispered, “So basically, it’s the ocean in school now.” Touché! 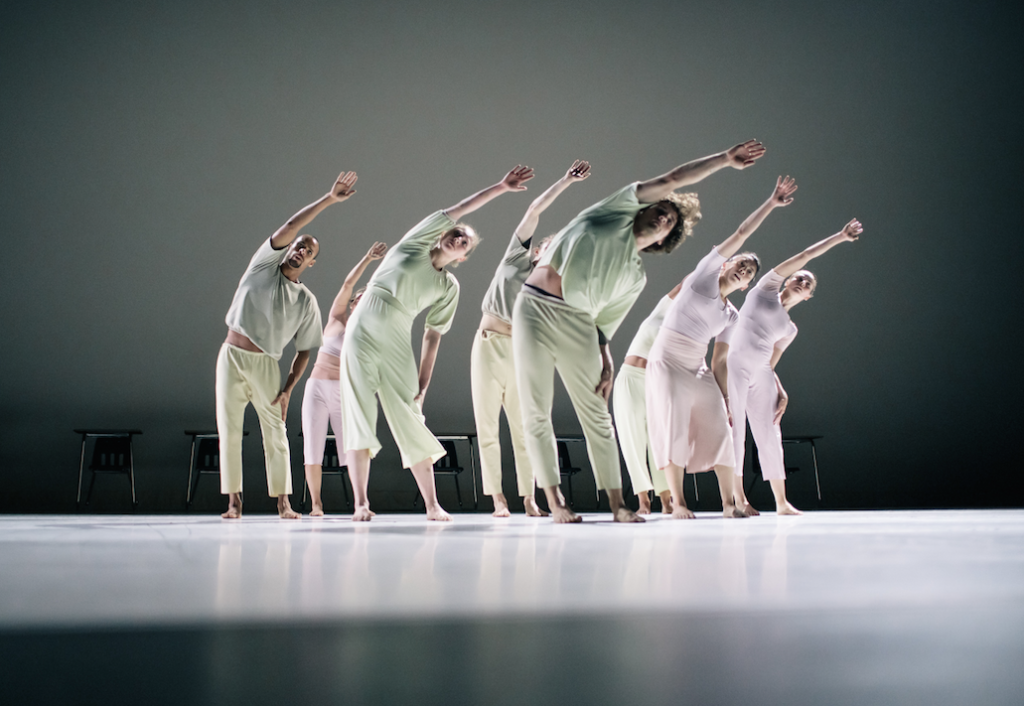 But the movements and performers were all still stunning, and I totally appreciated those aspects of the production.

So here’s what I absolutely detested about it—it was basically ragging on the educational system for teaching by repetition, which the writer of the monologue in this piece feels is stifling creativity. Well, I have news for this choreographer—how does he think dancers learn to dance?! By repetition!!! Not the free will the young girl who narrated this section was espousing! (I explained the action to another professional dancer, and before I was even done, he exclaimed, “That’s dance!”) Leaning to follow direction, and steps, is exactly what they learned to do in school! And the ad nauseum repetition of those steps is what dancers do their whole careers, even after they’re already pros! So I’m at a loss to figure-out the raison d’etre for this number from this company.

Yes, playtime in life, in general, is way down these days, but that’s because children are addicted to technology. That is not the school system’s fault.

As a former teacher, especially one who taught with both the traditional methods and with creative learning centers, and someone who grew up with both parents also being teachers, Jacob Jonas and company are so wrong about this one. Kids definitely need to learn discipline, order, parameters, and to respect laws. We all do! What did they think they’ve been doing their whole lives learning dance?! I was a dancer myself, and we do each step zillions of times; that’s the only way to learn and perfect.

There is a lot wrong with many school systems; they need more funding for the arts, better teacher training, more respect and pay for teachers, more recess and playtime, and more physical fitness. And so much more. But the words that were scripted for this very young and wonderful contortionist in this show were mainly erroneous.

And the actual choreography didn’t seem to have anything to do with education, outside of the few times the dancers sat at desks and raised their hands.

So I’ll end this discussion here.

On a sidebar, I think that I’ve been watching too much TV and sports recently because seeing two of the beautiful men dance in this show, I could not stop thinking how much one looked like the character “Michael” on the CW’s Roswell, New Mexico, and another looked like Andre Iguodala, who was helping the Golden State Warriors to a Conference Semi-Final win at those exact moments his doppleganger was entertaining us! So a night of live theatre, especially at The Wallis, was exactly what I needed right then.

As always, I thank The Wallis for bringing us yet another dance show, which not enough theatres do these days. It’s the most comfortable theatre in town, with all great sightlines; it’s just perfect for dance. I can’t wait for their next presentation!  www.thewallis.org