Trending
You are at:Home»DANCE»DANCE: CELEBRATE DANCE
By Karen Salkin on March 11, 2015 · DANCE

As a life-long fan of dance, (you can’t believe how much so,) I was thrilled to witness the live show, Celebrate Dance, this past week-end at the Alex Theatre in Glendale. The whole event was wonderful, beginning with a classy pre-show cocktail party that was held in the upstairs bar area. (Deets on that fun a bit later.) 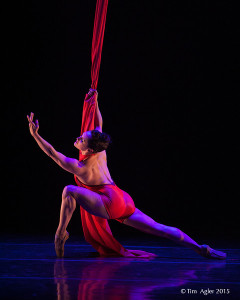 I first have to share my thoughts on dance in general, that this beautiful show brought to the forefront of my mind again.

When I was little, there could be nothing higher in life to me than an excellent dancer. (Mr. X asked me, “What about a surgeon?,” and I replied, “No, not even them!”) When I grew-up, I realized the injustice that the people with the most talent constantly get the short end of the fame stick. Mr. X gets really upset about this topic, as well. So a presentation such as Celebrate Dance is a fantastic opportunity to show audiences these incredibly talented artists.

As I’ve alluded to in previous columns, you can fake singing, you can fake acting, you can even sort-of fake stand-up comedy. (Just look at many of the no-talent contestants on Last Comic Standing, who just talk loudly and make faces to get laughs!) But you absolutely cannot fake dance talent!

The years and years of dedication to their art, and the hard work that dancers put in, doesn’t often culminate in the fame of other show business professions. (Although being a young dancer does pay dividends for a lifetime; they look good forever, they always carry themselves regally, they know discipline, and a certain panache emanates from them—you can always tell who’s a dancer.) So I’m asking you to please make note of the names of the dancers and choreographers I’m lauding here, because these are the people who deserve the recognition. 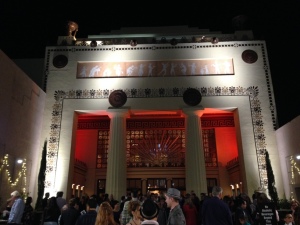 Event Producer, (and dancer and choreographer) Jamie Nichols, (what a great name!,) knows that all, in spades. This was her tenth year of producing Celebrate Dance, which always features several dance companies in and around Los Angeles. And celebrate dance is exactly what the enthusiastic audience did on Saturday night. I love a receptive and appreciate audience and this one was definitely that! Even though I had never before met anyone involved in this project, I could feel a lot of love in that building.

There were numbers from nine dance companies. Since the show was considering it to be their tenth anniversary*, all dances were reprises of ones that had premiered in this very show in years past. *[Note: Being the nut for details that I am, I have to point-out that, since the first Celebrate Dance was in 2006, it was the tenth year of the show, but really their ninth anniversary. But they’re all so talented that they can call it anything they want!] 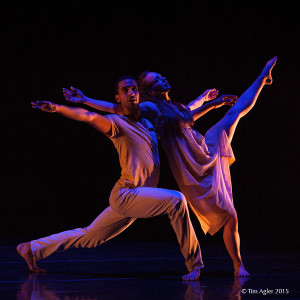 Some of the numbers took my breath away. I have to tell you of my three favorites, in hopes that you can see the dances, companies, and actual performers somewhere down the road. (Please keep an eye out for their amazing work.)

The first act featured a duet entitled Push, with choreography by Jennifer Backhause, for her eponymous company. It was seamlessly danced by Tawny Chapman and Joshua King, and could not have been lovelier.

Next came a filmed tribute to prolific choreographer Marie de la Palme. I had never known of her before, but by the end of the brief video, I was as saddened by the recent loss of this beautiful woman as the entire audience seemed to be. To continue the tribute, soloist Jean Michelle Sayeg, of the Motion/Tribe company performed one of Marie’s signature pieces, Le Coeur Illumine, complete with red acrobatic silks. You could have heard a pin drop. I didn’t want it to end! 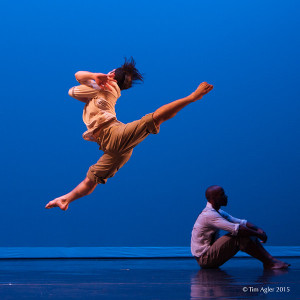 Stunning photo of Zareh Markarian (with another company member) by Tim Agler. (When Mr. X saw this photo, all he could get out was, “Wow!”)

I had thought that that last one would be the highlight of the evening for me, until I laid eyes on the incredible Zareh Markarian, performing in Joelle Martinec’s The Walk West, for the SoleVita Dance Company. This number featured about a dozen dancers, but I had eyes for only Zareh. He was so stunning that I just had to go home and research him. I was shocked to discover that this guy did not start dancing until he was fifteen! Fifteen years old!!! How is that even possible?! I don’t understand how someone can be this incredible when they start dancing that late in life. I have not been this excited about a dancer since I first saw Ricky Ubeda’s very first audition on last seasons’s So You Think You Can Dance, when I correctly crowned him the eventual winner! I feel Zareh needs that opportunity, as well.

The audience, which I was happy to see included many young dance students, left in the most upbeat mood, still buzzing about we had just been treated to.

I applaud all involved—dancers, choreographers, teachers, parents, families, sponsors of this great event, and the Alex Theatre itself—but most of all, the energetic Jamie Nichols for conceiving the idea, and putting it together each year, to begin with. I’m tired just thinking of the work that she puts into it!

One of the tasty tidbits. Photo by Alice Farinas.

Now, as promised, a few words about the pre-party. It was deliciously catered by Pink Salt Catering, who put together the perfect menu of easy-to-eat and delicious hors d’oeuvres for the guests. Among my faves were filet mignon on toast, Thai chicken salad on crisp triangle chips, and even tiny cups of chilled carrot soup! We loved adorable server Julien. And even had fun chatting with his less light-hearted co-hort Connor. It was all overseen by amiable Eric, who made the presentations look lovely. 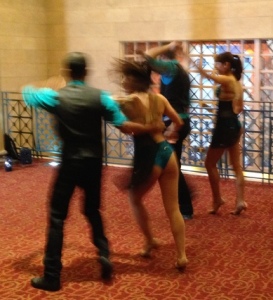 Latin Rhapsody, moving too fast to be properly captured. Photo by Karen Salkin.

The happy barkeeps kept the champagne flowing, and we were also treated to a couple of dance numbers from salsa quartet, Latin Rhapsody. It was a perfect dance fete, and was exactly like the ones you see in movies about the genre.

So, it started perfectly, and ended that way, as well. And, as an added bonus, I got my introduction to the fabulous Alex Theatre! I’m hoping to start including it in my regular theatre rounds. And I’ve already circled next year’s Celebrate Dance on my 2016 calendar!!! I wouldn’t miss it!