This is a quick review of the most pretentious dance show I’ve ever seen in my life! And I would venture a guess that I’ve seen at least four to five hundred of them live, not to mention all the dance I’ve seen in movies and on TV, and in musical theatre!

Available Light, at Disney Hall in downtown Los Angeles, was hands down the worst dance presentation ever. In every way. It was perhaps even the worst thing on any stage, anywhere, period. And I’ve seen the National Ballet of Yugoslavia in a broken-down theatre in Malta!!!

So, here’s my simple official review: They should use this show to make prisoners talk!  I would have told every secret I have to make it stop!!! 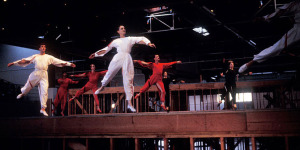 These are pictures of the show from three decades ago. I could not find images of this latest incarnation, but I can tell you that their costumes were way skimpier.

I don’t really want to describe it much, because wasting even one more second of my life on it would be detrimental to me, so I’ll do it quickly. Picture watching a dance class, run by a demonic teacher, who makes the class do the same moves over and over again, to horrible atonal music, for an hour in a row. That’s Available Light in a nutshell. The piece is thirty years old, so maybe audiences liked Chinese Water Torture-esque fare back then, but I can’t imagine it. What I can imagine is why it’s been kept hidden for all these years!!! (I just wish it had stayed that way for thirty more.)

The friend I saw it with and I (both former dancers) were truly appalled. And we very rarely agree on anything. (I’m glad to say that, on the way out, many of our fellow audience members expressed that very same sentiment.)

The dancers were talented enough, (except for one goony guy—I don’t know how he snuck in there,) and the two-tiered set that Frank Gehry designed three decades ago was impressive, especially in that auditorium, but that was it. The choreography, by Lucinda Childs, was beyond boring and repetitive. And the John Adams-composed music was literal torture. I really don’t know how my pal and I were polite enough to sit through it! (Afterwards, we both joked that we wanted our money back—and we hadn’t paid! We had inadvertently won a give-away of the tickets, and let me tell you—the people who gave them away must have seen a preview of the piece!)

The only good thing I have to say about the show is that it was, mercifully, short. It ended just as I was about to begin spilling much more than my name, rank, and serial number!

[Note: I noticed one particular woman who sat two rows behind me, in a strange, highly-considered little section. She put her feet over the empty seat in front of her, closed her eyes, and slept through the entire performance. (Yes–I was jealous.) But, when it was over, she was one of the first to jump up and give them a standing ovation! Talk about full of it! It was The Emperor’s New Clothes of dance. Everyone was afraid to admit how awful it was, for fear he or she would be the one who looked bad. Obviously, I’m devoid of that fear!]