Trending
You are at:Home»CHARITY»CHARITY/THEATRE/EVENT/: ONE STARRY NIGHT 2016
By Karen Salkin on August 26, 2016 · CHARITY, EVENTS, THEATRE

First let me say upfront that I wish that people would just donate to causes to be nice, instead of also needing to be entertained. But since that charity model does exist, the recent One Starry Night was the perfect show to raise funds. It benefited the Golden West Chapter of the ALS Association, which is such a worthwhile group. 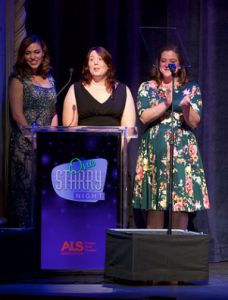 The producers of the show, welcoming the audience. Photo by Earl Gibson III for the ALS Association Golden West Chapter.

In case you’re not familiar with ALS, it’s the progressive neurodegenerative disease that was made famous when Yankee great Lou Gehrig had to retire because of it, which is all that most people know about it. It’s absolutely horrible, so raising funds for research to fight it is mandatory. Last year’s Ice Bucket Challenge went a long way to help with that, and other events, such as this beautiful show, pitch in a lot, as well.

One Starry Night was held once again at the Pasadena Playhouse, which is actually my favorite theatre in Los Angeles. It’s such a perfect venue for three-part soirees such as this, with it’s lovely courtyard, close proximity to redwhite+bluezz, (the restaurant that hosted the two receptions that evening,) and especially the very comfortable theatre itself.

Some of the silent auction items. Photo by Earl Gibson III for the ALS Association Golden West Chapter.

As we arrived, (right alongside headliner Jason Alexander, I might add,) the patio was absolutely jumping! In the warm summer night, so many people were happy to mingle outside. But my friend, Alice, and I went into the VIP party at the aforementioned eatery to enjoy some of their delicious fare. The buffet for this very special fete featured salads, fresh fruit, and a carving station with turkey and prime rib. Yu-um! There were also a lot of passed appetizers, like crab cakes, beef sliders, caprese salad on skewers, and my favorite, spicy crispy chicken sticks. The whole while, the silent auction was being conducted, with lots of exciting goodies up for grabs.

For once, I have to say that the show was even better than the food! It was fabulous performance after fabulous performance! They’re all very talented, and obviously very kind and caring people to have donated their services. Alice hadn’t seen last year’s rendition, so she went extra-nuts over this revue of wonderful singers, dancers, and variety acts. You know my linear mind has to go in order, but please read this whole column to discover my surprise favorite act of the evening.

So here are just a few of the highlights:

Broadway star Valerie Pettiford was the first one up. (You might know her from TV’s The Blacklist.) Let me tell you, that woman is a performer with a capital P! She was marvelous, and made the most of her time on stage, which was made even better by a group of energetic young dancers backing her up. [The big pic at the top is of Valerie Pettiford and company. Photo by Earl Gibson III for the ALS Association Golden West Chapter.]

Then perennial soap star Bill Hayes did a delightful little song and dance. His rendition of Put on a Happy Face (from Bye Bye Birdie) was not only charming, but very appropriate for the evening, and made us all smile, as the song told us to do!

Comedienne Wendy Liebman added some great humor to the proceedings. I’ve seen her work over the years, and I think she’s actually gotten funnier with age. And I absolutely love her new longer locks! You go, girl! 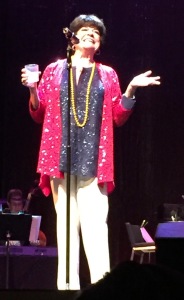 One of our absolute favorites, (and I think the same goes for everybody in that audience,) was Scott Land’s marionettes. Besides being funny and spot-on, they were so real. My heart actually broke for the sad clown one. I had to remind myself that he wasn’t human. (Or was he?) The whole act was just brilliant!

John Lloyd Young, (who played the spectacular Frankie Valli in Jersey Boys on Broadway,) sang a beautiful, unrushed Unchained Melody. The Righteous Brothers would have been proud!

When Joanne Worley, (of Laugh-In fame,) appeared after intermission, (at this very theatre where she had begun the Los Angeles portion of her show biz career!,) Alice almost jumped out of her seat. She’s such a fan of hers, and Joanne did not disappoint. I’ve seen her at soooo many events in Los Angeles throughout the years, and still had no idea that she sings!!! Her ditty, Vodka, was just fabulous! She was the highlight of the show for Alice, for sure! (The song was written in 1926 by George Gershwin and Oscar Hammerstein, but Joanne performed it like it was new. I had to do a lot of research to find-out just what it is!) 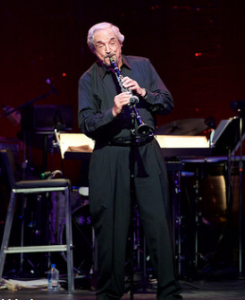 But then came my surprise highlight. My head is still reeling from this performance by Hal Linden. Of course, I’ve always known him as TV’s Barney Miller, and I’ve heard him sing a time or two, as well, in his booming baritone. So, when he came out toting a clarinet, I thought he was going to play a note or two in the middle of singing, to impress us. But, he wound-up not singing at all, but rather playing a whole Benny Goodman medley that would have literally knocked my socks off, if I had been wearing any. I had no idea Hal Linden had that level of musical talent. It was truly amazing. (Thank you, One Starry Night, for revealing that to me!) When Sing, Sing, Sing ended, I almost gave myself whiplash jumping to my feet. I have a feeling I mooned the audience members behind me, (because my skirt was short, and I couldn’t give up applauding wildly for even one second to pull it down,) but I didn’t even care. That’s how enthralled I was with Hal’s (and the band’s) performance. Wow. Just wow. I was blown away, as I’m sure we all were. I’ve been jitterbugging through life since that night. 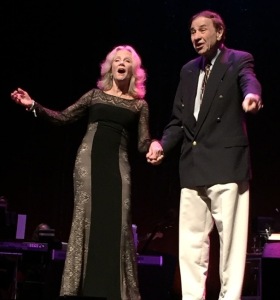 After that, I did not think I could calm down to enjoy any other act. I thought, “Really, who can follow that?” But I almost cried when the beautiful Hayley Mills, my idol since I was a little girl, floated onstage. I had just found-out that morning that she would be making an appearance, (or else you know I would have definitely included her in my preview of the event,) and was a tad worried about what grown-up Hayley Mills would be like. The little girl is so engrained in my mind, (Parent Trap is one of my two favorite movies of all time,) that I almost didn’t want to see her in person at any other age. And, of course, I wanted her to be twins. (Please don’t ever mention to me that she is not! I need to hold on to some fantasies in life.) But I need not have been concerned. She became a beautiful woman, and Alice and I both went nuts over her dress, which was the best of the night. After she spoke, (eloquently, of course,) she brought out our mutual good buddy, prolific songwriter, (and uber-nice gent,) Richard Sherman. And then they dueted on—get ready for it—Let’s Get Together, her song from Parent Trap! It was a truly magical moment, and one I’ll be forever grateful that I witnessed up-close and personal like that. (So, here’s another “thank you” to One Starry Night.) 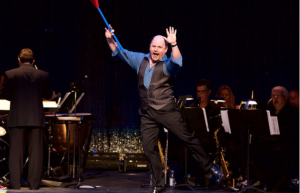 So, now, what performer would be secure enough to follow this already-incredible line-up, you ask? Well, none other than Seinfeld’s Jason Alexander! I had never seen that show, (don’t judge–it was on during my clubbing days,) but, of course I know who he is. And that he’s also an excellent singer. But what he did this night was beyond. He came complete with a comic spiel and a whole musical act, based on Broadway roles he wants to play. It was a real musical comedy act, but my main take-away is that he has a great voice! I would have been happy to listen to him sing an entire song of the many he sang just a line or two from, including Jesus Christ Superstar. The whole audience really appreciated Jason.

There were many more performers than that, but not enough space here to laud them all. So you’ll just have to go to next year’s One Starry Night to witness it all for yourselves. 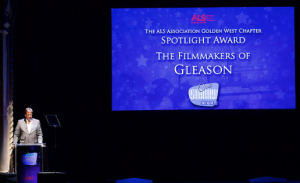 Perhaps most importantly, in the middle of all this music and levity, there were several serious moments, (but not maudlin ones.) First up was the Spotlight Award to the filmmakers of the documentary Gleason, which follows former pro football player Steve Gleason though his journey from famous athlete to ALS patient. I’ve followed him myself through the years, and, if this film doesn’t make you understand what living with ALS is like, nothing will. As sad as it is, I’m glad that someone made it. (And also that Steve had the vision to make a video diary for his, at the time, soon-to-be-born, son.) 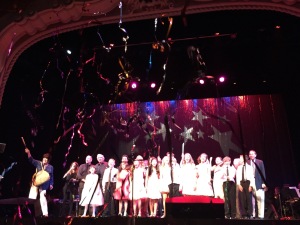 The finale. Photo by Karen Salkin.

The Commitment to Care Award was presented to a team of doctors from Kaiser Permanente Southern California, who are really helping in the fight against ALS. Scott Miller, the doctor who spoke for the team, said the research isn’t just about curing the disease, but healing, as well. There is a fine difference I don’t think many of us would have thought of. He added, “Nobody cares how much you know until they know how much you care.” Spot-on, Scott!

Part of the dessert buffet. Photo by Karen Salkin.

After a rousing finish to the show, by all the performers, and the wonderful Richard Allen-led band, (who added so much to the night—there’s nothing like live music!,) we moved back into redwhite+bluezz for a dessert meet-and-greet. Richard Sherman did me the solid of introducing me to Hayley, and she was as sweet as could be. She expressed to me that she was impressed that I’m a writer! Who would have thought that my idol would think that? OMG!

It was truly a “starry night,” for one and all. I sincerely hope that ALS will be cured by this time next year, but, since that’s probably being way too optimistic, I then hope to see all of my readers at next years’ rendition of One Starry Night! I can’t imagine what fabulousness and surprises they’ll have in store for us then!

And if you now feel inspired to donate, or would just like to learn more about ALS, or are curious to see the complete list of this year’s One Starry Night performers, please go to: www.alsagoldenwest.org