This might just possibly the juiciest Celeb Sightings ever! What a varied bunch! Except for the first two, they all happened in the month of January. So let’s get right to them:

12/23/14 Amber Rose driving a luxurious white SUV on Valley Vista in Sherman Oaks. Although my car-mate was 100% positive it was she, I wan’t convinced at first. But the big honking Escalade put me over the top. 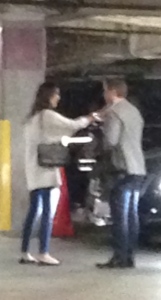 12/27/14 ABC home improvement guru, Michael Moloney, at the Century City Mall. He walked right by me, and let me tell you guys—he looks exactly like he does on TV! Trust me when I tell you what a rarity that is! (When I was doing my show, Karen’s Restaurant Revue, at first I used to get upset when people told me I was so much prettier in person than I was on TV, because I thought you should look the same in both places. And then I realized that looking better in person is so much more desirable than looking better on tape and film. Well, I guess except for really famous people who are seen by more people in those mediums than in real life. Wait—I think I have to re-think this whole concept.)

1/4/15 Benedict Cumberbatch and Allen Leech speaking after a screening of their film The Imitation Game in West Hollywood. The entire place was packed to see them! (If you missed it, you read my review of this not-really-the-true-story here: itsnotaboutme.tv/news/movie-review-the-imitation-game. Sadly, the one thing from the film that is true is the part about the treatment of homosexuals back in the day.) 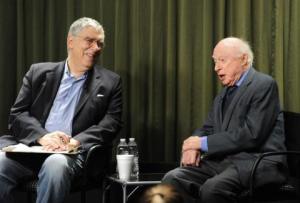 1/6/15 My wonderful old pal, Elliott Gould, at the SAG building in West Hollywood. He was interviewing amazing one-hundred-year-old actor, Norman Lloyd, and was just the perfect man for the job. He was kind and attentive, and never interrupted Mr. Lloyd’s long but fascinating stories. And I’m glad to report that Elliott’s bear hugs are as warm as they always were! 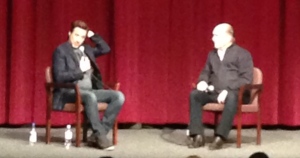 1/6/15 Robert Downey, Jr. interviewing co-star Robert Duvall after an industry screening of their film, The Judge, in West Hollywood. That’s what I call a bountiful bunch of Bobbys!

1/7/15 Jennifer Aniston speaking in Westwood Village after a screening of her film, Cake. (Still don’t get the gimmicky name. Nor the rest of the film, actually.) She was as non-special as I had expected. I feel for the girl. (My review of this weak film will be published in the next few weeks.) 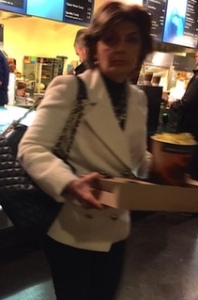 1/8/15 Gloria Allred buying popcorn to have at the ready at a Hollywood screening of The Theory of Everything. Then she spent the rest of her before the film began talking animatedly on her phone in the hallway of the theatre. I give her credit for being polite enough to not do that at her seat!

1/8/15 Eddie Redmayne and Felicity Jones speaking after the above-mentioned screening of their film, The Theory of Everything. They could not have been more sincere, charming, informative, natural, and nice to each other. They really were a delight. I’m so glad I saw them speak together, rather than at two separate times, because we got to see how well two co-stars can get along, absolutely naturally. (You can read my review of this wonderful film here: itsnotaboutme.tv/news/movie-review-the-theory-of-everything.) 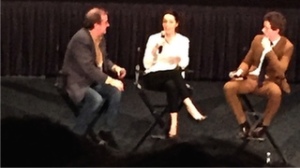 (L to R) An interviewer with Felicity Jones and Eddie Redmayne. Photo by Karen Salkin.

1/9/15 This was my favorite celeb sighting in a long while: Jason Ritter of Parenthood at the Secret Room Events’ Golden Globes suite at the SLS Hotel in Beverly Hills. I got to tell him a story of when we met when he was little, which is one of my favorite celebrity stories of all time, and he couldn’t have been more receptive. He laughed hard and loud. (If you missed it, I hope you’ll check it out here: itsnotaboutme.tv/news/gifting-suites-secret-room-events-golden-globe-style-lounge.) 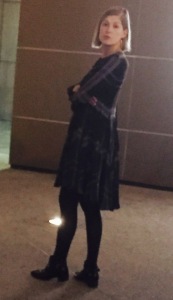 Rosamund Pike waiting for her plus one outside the Ahmanson. She refused all photographers, but we got a snap! Photo by INAM staff.

1/10/15 Viola Davis from How To Get Away With Murder, Chord Overstreet from Glee, and several Jane The Virgin cast members at the GBK Golden Globes suite at the W Hotel in Hollywood. Viola and I have a mutual really dear friend in Rhode Island, so it was wonderful to catch up with that professor’s news that Viola’s adorable husband Julius told me about. (For more of the story, read this: itsnotaboutme.tv/news/gifting-suite-gbk-golden-globes-2015-lounge.)

1/12/15 Rosamund Pike, speaking after an industry screening of her film Gone Girl in Sherman Oaks. She was hands-down the absolute most boring interviewee ever! (And the movies was pretty stupid, too.)

1/13/15 Amy Adams, just sitting in an outdoor chair at the Century City Mall! She was just talking on the phone, with no drama. It was lovely to see such an excellent actress being a normal, polite person.

1/16/15 Behind-the-scenes celeb George Schlatter (he produced Laugh-In, ushering in an entirely different way to do comedy on TV,) having lunch next to me at hot spot Cecconi’s in West Hollywood. 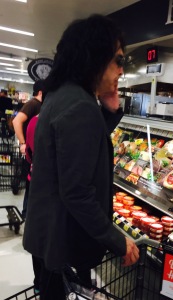 1/28/15 For the second time this month(!), Rosamund Pike, waiting for a pal outside the Ahmanson Theatre in downtown LA, at the opening night of Dame Edna’s Glorious Goodbye. I also spied handsome Pierce Brosnan at intermission. I was so glad to see his wife there with him, because she made me feel thin. And made Mr. X feel luckier than James Bond! (Read my review of the fabulous show here: itsnotaboutme.tv/news/theatre-dame-ednas-glorious-goodbye-the-farewell-tour.)

1/31/15 KISS guitarist Paul Stanley at the new-ish Ralph’s supermarket in Sherman Oaks. He was at the service deli counter, on the phone. Probably doing what Mr. X—calling his loved one to make sure he orders the sandwiches correctly!