I started the year off with a sighting on the very first day, less than a half hour after I left the house! Here’s hoping that’s a good omen, for all of us.

1/1/14 Olympic diving legend, and dive master of the celebrity diving show Splash, Greg Louganis, at the New Year’s Day fete of PR whiz, Joanne Geffen. He left in an interesting little car; I must ask him about it he next time I run into him, which I have a feeling will be soon. 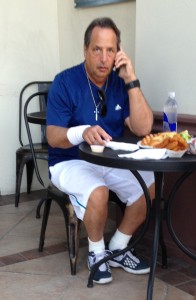 1/3/14 Sour-ass comedian Jon Lovitz having lunch by his lonesome on the patio of a fish place in Sherman Oaks. Mr. X said, “I think he was sitting there thinking of bad things he can say about Obama.”

1/4/14 Krump dance legend, Tight Eyez, hosting a major competition in industrial Tustin, California. A who’s who of the genre was there, including judge Big Mijo, eventual winner Dread (aka ELI), and my all-time favorite krumper, Oldz Kool.

1/9/14 Charlene Tilton, Tommy Chong, and David Steinberg all at the fabulous Oh Canada fete at the uber-classy Peninsula Hotel in Beverly Hills. (You can read all the deets here: itsnotaboutme.tv/news/party-oh-canada-benefit-cocktail-party.)

1/10/14 I was happy to spend some time chatting with actor John Savage at the Secret Room Events Golden Globes suite in Beverly Hills’ SLS Hotel. Despite his complete body of work, he’ll always be known as the guy whose legs get messed-up in the iconic film, The Deer Hunter. 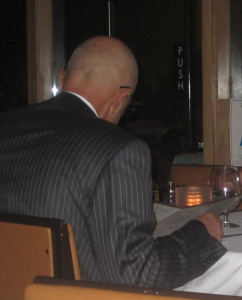 Sorry–the back of Robert Shapiro’s bald head was the best I could do on this one! Photo by Karen Salkin.

1/11/14 It seemed that everyone at the GBK Golden Globes suite was the most excited to see Matthew Moy, the little guy from Two Broke Girls. He’s so young-looking in person that I heard a few people say, “There’s that kid from…” the show!

1/14/14 I was happy to have a sighting on my b-day because I got to write that fun date!!! It was uber attorney, and commercial pitchman nowadays, Robert Shapiro, having dinner right next to me at Il Segreto, the newest eatery in the Beverly Glen Center. (My negative review of the place to come down the line; let’s just say that it was almost $150. for two of us, with no drinks or desserts!!! Despicable!) Shapiro had shaved his head, so my friend (who can spot celebs at five hundred paces!,) was proud of me for recognizing him anyway. 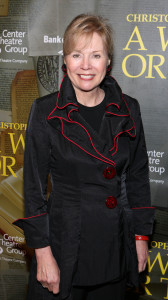 1/22/14 The still-gorgeous Kathryn Leigh Scott, of Dark Shadows fame, with me(!) at opening night of Christopher Plummer’s one-man show, A Word or Two at the Ahmanson Theatre in downtown LA. She’s my pal, so I forget about her notoriety, but that night, I remembered right away when I saw a pack of autograph-seekers descend upon her as we were walking in.

1/23/14 This still-funny married comedy duo, Charlie Brill and Mitzi McCall, having lunch close to Mr. X and me at a popular eatery in Sherman Oaks. The funny thing is that they used to be big fans of my show, but they stopped us to say hi because they recognized Mr. X, not me! After a little bit of talking, I’m the one who remembered Mitzi and Mr. X had done a TV show together a few years back; not to be left out in the camaraderie department, Charlie and I realized that our birthdays were a day apart the week before, so we all had extra connections. I love a showbiz lunch like that!

1/24/14 Academy Award winner Lou Gossett, in the lobby of the W Hotel in Westwood. I was sitting in the lobby after an event, waiting for a friend, when he got off the elevator and gave me a nod. He looked great! So much better than he has in recent years. I should have asked his secret, but I just sat back and admired an actor of his high caliber.

1/24/14 And let’s not forget Cheech Marin. I spied him at Red Carpet Events LA’s gifting suite for the Grammys, the event I mentioned that I was at in the previous paragraph. (You can read the deets here, if you missed them: itsnotaboutme.tv/news/gifting-suite-red-carpets-events-la-grammys-style-lounge.) So, I saw Cheech and Chong within a few weeks of each other! I’m really getting a kick out of that.