Okay, here it is—my last Celeb Sightings column 2013! And now that I’ve come to the end of all my SAG Nominating Committee screenings, I’ve gone back to living life outside of a screening room or movie theater, so I spotted only the first two at one of those. The rest of the month was just the normal, yet very interesting, sightings that happen every day in LA. Lucky us! Let’s get to them:

12/5/13 There was lots of star power at the Landmark Theatre in Westside Pavilion that night for a special screening of August: Osage County, but it was former supermodel Cheryl Tiegs who held me up in the concession line for a little bit. I was behind her, and the guy serving her seemed really nervous that something was taking so long with her. When she turned around, I was shocked at her plastic-looking face. It took my friend to point-out who she was for me to recognize her! 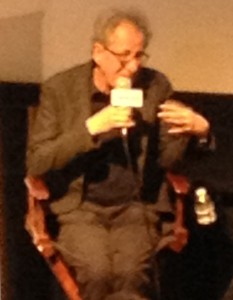 12/5/13 Geoffrey Rush doing one of the best Q&As ever at the same Landmark Theatre as above, after an industry screening of The Book Thief, the best movie of the year, in my opinion. He was intelligent, informative, witty, and charming, and commanded attention like few others I’ve seen. And could not stop praising his co-stars, none more than the brilliant new youngster, Sophie Nelisse. (You can read my review of the film here: itsnotaboutme.tv/news/movie-review-the-book-thief.)

12/6/13 The Facts Of Life‘s Mindy Cohn on Montana Ave. in Santa Monica for the annual Holiday Open House. My friend cracked me up when, very matter-of-factly, she stated of Mindy, “She’s not that fat anymore!” Now, if only she could also say that of me!

12/8/13 Nebraska‘s Bob Odenkirk sitting next to me at the magic show, Millennium Magic, at Theatre West in the Valley. He was there to support his pal, headliner Andrew Goldenhersch. (But my pal, Jeanine Anderson, produced it, so I win!!!) 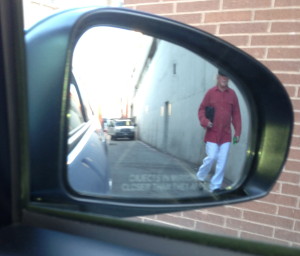 Nick Nolte. I know you can’t see him that well, but I just thought it was sort-of an artistic snap. And it shows off my detective skills, as well! Photo by Karen Salkin.

12/10/13 Nick Nolte, walking down an alley in Beverly Hills with a pal, towards Little Santa Monica, where they turned up the block. I really hate to say it, but he did look sort-of like a homeless man; I have a feeling he doesn’t care much about appearances, though, luckily for him.

12/11/13 What an eclectic mix with of famous people, from all eras, turned-out for the opening night of Aladdin and His Winter Wish at the Pasadena Playhouse! While Bruce Vilanch was working his magic on-stage, Neil Patrick Harris, Jerry “The Beaver” Mathers, ’80s TV star Charlene Tilton, (looking like a grown-up, but still very pretty,) and Dancing With The Stars pro Kim Johnson were in the audience being entertained by him.

12/13/13 Yes, I know—it’s shocking that I left the house on a Friday the 13th! But I was rewarded by having still-handsome old school actor Billy Dee Williams walk right past me into Vibrato Grill in the Beverly Glen Centre. We were all there for the festive holiday-themed Taste of the Glen.

12/20/13 CNN talk show host Piers Morgan, crossing Rodeo Drive in Beverly Hills before noon. He had obviously done some shopping because he was carrying several high-end shopping bags. I thought it was a tad strange that he was also pulling a suitcase, but then I saw the luggage store on the side of the street from whence he came, and I understood.

12/21/13 This is for you Police Academy fans: Marion Ramsey, who played Officer Laverne Hooks, at a beautiful holiday party at the home of actors’ manager, (and my New Best Friend, for almost a year now!,) Maria Calabrese. I may be the only person who never saw that series of films way back in the day, despite the fact that many years later, one of the stars, the sadly late Debralee Scott, became my manager for a brief time before she moved back to New York. So getting to talk about her again with Marion brought up lovely memories.

[Note: Obviously, this month and year have two days left, but I wanted to post this column while it’s still 2013. Never fear, though; if I spot any fabulous celebrities today or tomorrow, I’ll include them in the next Celeb Sightings.]