October turned out to be quite the juicy month for celeb sightings, several because I’m on the SAG Nominating Committee this year, and many famous actors attend the screenings, both to promote their films, and in the audience with me. Here’s a sampling:

10/2/13 This was an old school one, but David Faustino, of Married With Children fame, waiting to get his hair cut at Bahram’s on Sunset in West Hollywood. I had never seen that show so I didn’t know who he was, but someone told me and then I realized they were correct. And he was with his cute dogs, so it was all good. 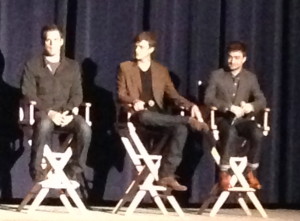 10/4/13 Harry Potter‘s Daniel Radcliffe, Dexter‘s Michael C. Hall, and In Treatment‘s Dane DeHaan, speaking after the first industry screaming of their indie film, Kill Your Darlings, in West Hollywood. (If you missed my review of it, you can read it here: itsnotaboutme.tv/news/movie-review-kill-your-darlings.) Even though none of them were exactly what I would call entertaining, it was kind of interesting to see Daniel Radcliffe in person. I was totally disappointed, though, when he said that all the smoking in the film didn’t bother him because…he is a smoker! Perhaps that’s why he’s so short. At least he was a tad charming when he told the groaning assemblage that his parents are even more disappointed about his bad habit then we were. 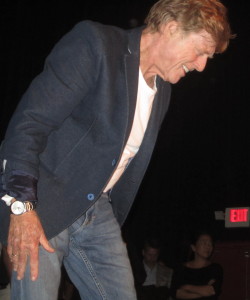 Robert Redford. Does that guy look almost eighty to you??? Photo by Karen Salkin.

10/6/13 Robert Redford!!! OMG! Now, that’s a true movie star. He spoke after the first industry screening of his new film, All Is Lost, in West Hollywood. The funny thing is that, even though he’s far from the most loquacious person I’ve ever seen, his half-hour of answering questions was about thirty-fold the number of lines he spoke in the movie. Here’s a spoiler alert about the film: Redford is the sole actor in it, and he speaks about only eight lines in the whole almost-two hours. (If you missed my review of it, you can read it here: itsnotaboutme.tv/news/movie-review-all-is-lost.) But he certainly held my attention, both in the film and speaking graciously after it.

10/13/13 An interesting group of actors, Matthew McConaughey, Jared Leto,  and Jennifer Garner, doing the Q&A after an industry screening of their new film, Dallas Buyers Club, in Hollywood. And surprisingly, each one was entertaining in his or her own way. (That “surprisingly” was for Jennifer.) Props to Jared, by the way, for honoring his commitment to be there, despite being sick as a dog! It was a successful panel, for a wonderfully important movie. (If you missed my review of it, you can read it here: itsnotaboutme.tv/news/movie-review-dallas-buyers-club.) 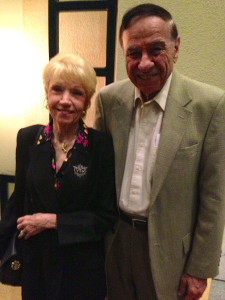 10/16/13 Disney’s songwriter extraordinaire, Richard Sherman, and his lovely wife Elizabeth, at the Freud Playhouse on the UCLA campus for the opening of When You Wish, the new musical about Walt Disney’s beginnings. Richard, a pretty tall man, told me that he’s being portrayed by the diminutive Jason Schwartzman in the new film Saving Mr. Banks, so keep that image in mind when you see it.

10/17/13 An interesting mix of celebrities at the breakfast for the Media Access Awards at the Beverly Hilton Hotel in Beverly Hills. There were not only presenters and honorees, such as Fred Willard, Marlee Matlin, Lauren Potter of Glee, Greg Grunberg late of Heroes, and RJ Mitte of Breaking Bad, but also working actresses (and SAG-AFTRA execs) Gabrielle Carteris and Amy Aquino. 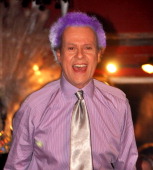 10/19/13 Richard Simmons at the For The Stars Fashion House launch event on Melrose Avenue in West Hollywood. I hadn’t seen him in his many years since we had done a dance/exercise number together on a national telethon almost two decades ago! I almost didn’t recognize him in normal clothing. I know that his lavender-colored suit that night doesn’t exactly qualify as normal, but at least he was out of his usual exercise garb.

10/21/13 Julia Louis Dreyfus, taking questions from the assemblage at a screening Enough Said, her new film with the late James Gandolfini. The session ended on a high note when an older woman just complimented the heck out of Julia, rather than ask a question. All of a sudden Julia screamed, then said, “That’s Estelle Harris!,” a co-star of hers on Seinfeld. Well everyone applauded, Julia got out of first the and walked to the edge of the stage and jokingly admonished, “That’s not a question, Estelle!” Without skipping a beat, the octogenarian came back with, “I couldn’t think of a f**king question!” Loving it!

And on that note, I’m going to end the celeb sightings for the month because no one’s going to top that encounter.