After the excitement of flying to New York at the beginning of the month seated next to the wonderful Lily Tomlin, (read all about it here: www.itsnotaboutme.tv/news/2012/06/13/celeb-sightings-celeb-sightings-17,) all sightings of other celebrities just could not compare. But, at least they began right away, on my very first full day in the Big Apple on this trip.  So, as June 2012 comes to an end, let’s get right to the Celeb Sightings this month:

6/7/12 This one was kind of funny. My friend Lauren and I were driving off her block in Manhattan, and she said, “Henry Winkler.” Since she used to date him, way back in the day, I thought she was going to tell me something about him. But, there he was, standing on her corner!!! (Just by coincidence; it wasn’t like he was there to serenade her or anything.) Just as she was about to say “hi” out the window, the light changed and he crossed the street. So, I witnessed the reunion that almost was. 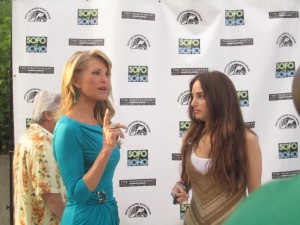 Christie Brinkley and her daughter Alexa Joel. All photos by Karen Salkin.

6/16/12 Christie Brinkley, at the Sofo at Soho event in Bridgehampton.  She was the honored at the event, for her environmental work. I was told that all her children were with her, but I saw only her daughter with Billy Joel, Alexa Joel.  Alexa’s open about her plastic surgery, so I’m not telling you guys something private, but I didn’t have the courage to ask for her doctor’s name.  Trust me, I would be speed-dialing him right now if I had gotten the info!  Christie looked like her usual gorgeous self. 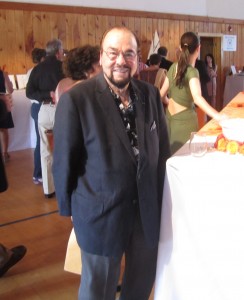 6/16/12 On the same night that I spied Christie at another Hamptons event, I chatted for a brief moment with Inside The Actors Studio host James Lipton at the Actors Against Abuse cocktail party.  (I know–that’s kind-of a silly name for it.  What actors are for abuse, except maybe Charlie Sheen and Tom Sizemore?)

6/16/12 This sighting is not so much of a celebrity, per se, but a working actress. But I wanted to include Tamara Tunie for you Law and Order fans. I saw her at the Midsummer Night Drinks event, to benefit worthy charity God’s Love We Deliver, on the stunning East Hampton property of designer Randy Kemper, who looks just like an old school Johnny Carson. At first, I thought Tamara was an old pal from L.A., whom I hadn’t seen in awhile, but the friend I was with asked around and found out she’s an SVU regular. Tamara was at the fete with her husband, and shamefully, she was sitting there smoking a cigarette! How anyone can still be dumb enough to do that, knowing the horrible death it can cause, is well beyond me. 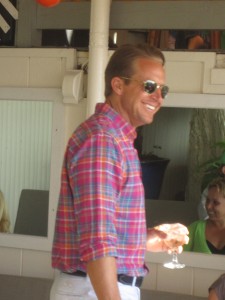 6/17/12 Celebrating Father’s Day with my friends the Bennetts, (since I apparently have no family of my own, I found-out recently,) we ran into former The Early Show co-host Chris Wragge.  He was actually pretty nice, and not at all like his goony on-air persona.  (In truth, I had seen only a few brief snippets of that show ever, but that was my impression from them; some of my New York pals, on the other hand, tell me they like his local news work.)  That CBS morning show must do something to its personnel to make them seem all so unappealing. (Not just my opinion; just check the ratings.)

6/24/12 Peisha McPhee, mother of Smash‘s Katherine McPhee, and a vocal coach on American Idol herself, (but not until several seasons after Kat came in second,) was on my plane back from New York. She looks so much younger and prettier in person than on her brief appearances on the show! She looks almost like her daughter!