February turned-out to be a juicy month for celebrity sightings in L.A.! I’m glad because I don’t know how many there will be in New York, where I’m spending for the entire month of March! I’ll be in Brooklyn a good deal of the time, and even though that borough has become a hot bed for young-ish actors in the past few years, you just don’t see them out and about like you do in good old Los Angeles. So, let’s get to the February ones:

2/3/12 Leaving a delightful lunch at the Paramount Studios commissary, my friend and I bumped into 93-year-old producer A. C. Lyles, who still has an office on the lot today! He was perhaps the best dressed man I’ve ever met! And stands so straight that many younger gents should take a lesson from him. For those not up on Hollywood lore, Mr. Lyles is best known for producing many westerns in the ’50s and ’60s. I wish I had remembered to tell him that I starred in a Western just a few short years ago, Brothers In Arms! I think he would have gotten a kick out of it; I know everyone else sure did! 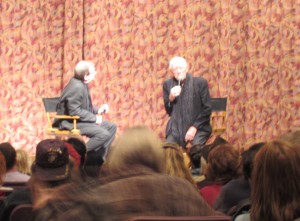 2/4/12 I guess this must be “old show biz month” because the very next evening, I saw 82-year-old Oscar nominee Max Von Sydow at an industry screening of Extremely Loud, Incredibly Close, the film for which he’s nominated this year. He’s brilliant, on-screen and off, and I could have listened to him all night. [Note: if you missed my review of the film, you can read it here: www.itsnotaboutme.tv/news/2012/02/22/movie-review-extemely-loud-incredibly-close] [Note #2: I actually got to talk to Mr. Von Sydow the day before the Oscars at the GBK Gifting Suite at the W Hollywood! OMG!] 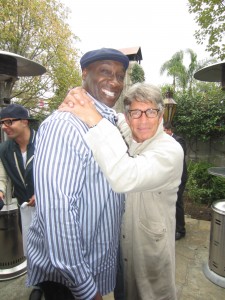 2/7/12 So many varied celebs showed-up at Doris Bergman’s Valentine’s Suite at Cafe La Boheme that it was more of a party! Among them: Academy Award winner Lou Gossett, Jr., Michael Clarke Duncan, The Tonight Show‘s former band leader Kevin Eubanks, (who’s so less tall than he looked on TV,) Castle‘s Kimberly Elise, Antonio Sabato, Jr., Harry’s Law piece-of-work Chris McDonald, Diedre Hall, and Eric Roberts, with whom I had a fun lunch on the patio. 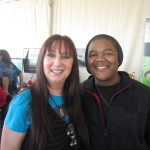 Kyle Massey with Karen Salkin, in one of the worst pictures she's ever taken!

2/8/12 Disney star Kyle Massey outside the SLS Hotel a few days before the Grammys. That place was jumping!!! [Note: he and I hung-out together in the Wow Creations Gifting Suite just two short weeks later.]

2/8/12 Antonio Banderas speaking after an industry screening of 3-D hit, Puss In Boots, in Hollywood. He was surprisingly well-spoken and knowledgable. And that voice! Yum! [Note: if you missed it, read my review of the movie here: www.itsnotaboutme.tv/news/2012/02/20/movie-review-puss-in-boots]

2/13/12 Ferris Bueller‘s Ben Stein dining across from me at Nonna in Beverly Hills, which was absolutely delicious, by the way. After about an hour, he and the woman he was with, who I’m assuming was his wife, asked to move to the other side of the eatery. I really do think it was because they were cold in the main room, which we all were, but my friends thought that perchance we were too loud for them, which I don’t think was the case. 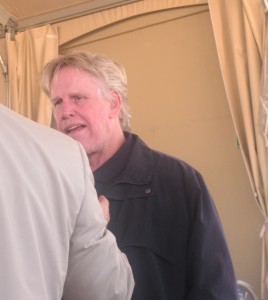 2/23/12 There were two rare celeb sightings at the Wow Creations Oscars Suite, which was also held at the L’Ermitage Hotel. Even though I had just bumped into my old pal, Bruce Vilanche, at JFK Airport in New York in January, I found it more unusual to see him at a gifting suite! He just had time to run in and hug me and meet the girls from The Indi Exhibit, before he was called back to the set of the Oscars themselves because he’s one of Billy Crystal’s writers. Immediately after he left, I spied Gary Busey in the same space.

2/23/12 The QVC Oscars party at the Four Seasons Beverly Hills was so jam-packed with the beautiful people that it was hard to spy any of the attending celebs in person, rather than on the giant screen. But I did manage to see Dancing With The Stars pro Cheryl Burke, and The West Wing‘s Allison Janney, both up-close and personal…in the ladies room!!!

2/25/12 Right after I chatted with the venerable Max Von Sydow at the GBK Oscars Suite at the W Hollywood, I ran into 2 Broke Girls‘ Garrett Morris, whom I actually used to know. Mr. X and he both ran the LA Marathon in the celebrity division back in the day. We left the suite together and reminisced about old times.